‘This is the best Kayce Litzau that any of us have ever seen:’ Sophomore setter unlocks full potential in her third year at Wichita State 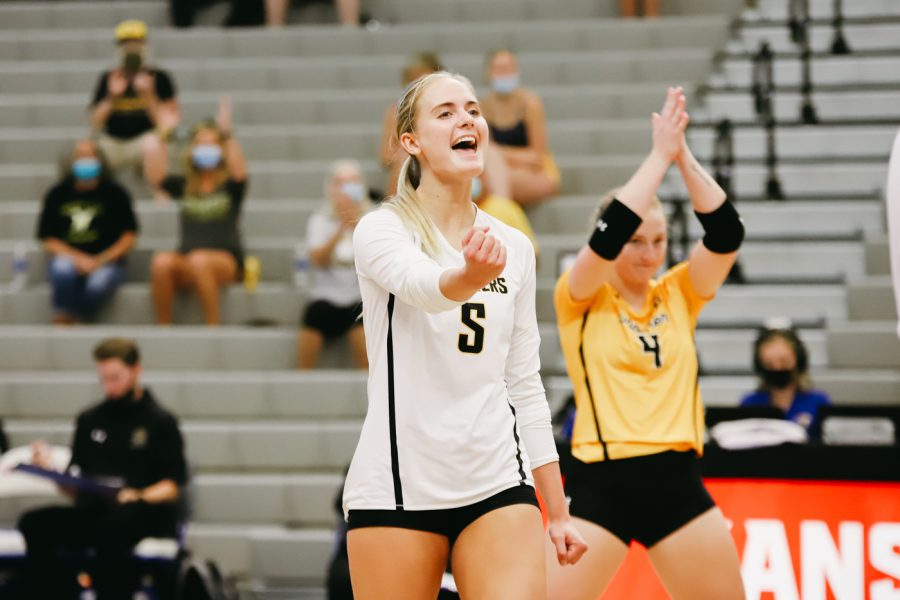 During Kayce Litzau’s freshman season, she contemplated whether or not to redshirt straight out of high school and as a result, almost didn’t have the college volleyball career she’s had since. Litzau is now in her third year as the starting setter for Shockers and is off to her best season yet.

Litzau said that head coach Chris Lamb told her it might be a good option to redshirt with several other players in her position when she first got to Wichita State. However, Litzau decided to play her freshman season which ended up working out for her.

In her freshman season, Litzau played in 25 matches and 70 total sets. She had 358 assists total during her freshman season which was second-most on the team. Litzau said she thought deciding not to red shirt was a good decision because she got experience right off the bat.

“I went into it and I started finding my way and figured out how to play on the fly and play at a much higher level than I’ve played in the past,” Litzau said. “Just gaining that experience and knowledge has helped me a long way.

“You obviously learn a lot in practice but just being able to be on the court and make mistakes and be able to learn from my mistakes as I’m going has been super helpful and now that COVID happened and I’ll get another year back it’s like a gift because I didn’t redshirt because I have five years now so it’s definitely a good thing.”

So far this season, the Shockers have a 14 -7 record and a 8-4 record in the American Athletic Conference. Litzau has been a key contributor to the Shockers success, however, in their  first three conference games, they started out with an 0-3 record.

Litzau and her teammates started clicking during the third consecutive loss to start conference play against Central Florida. Litzau had 51 assists, and had 14 digs in the five set loss against the conference favorites.

Head Coach Chris Lamb was impressed with Litzau’s performance especially against UCF who has a roster made up of experienced older  players.

“That is the best Kayce Litzau that any of us have ever seen as a volleyball player,” Lamb said. “She can hold her own with some of the better setters in our conference and it’s a testament to her growth as an athlete.”

“Right after the game, I told Kayce (Litzau) I was so proud of her,” Kelly said. “That’s the best I’ve seen her set. I’ve played with her for three years now and she looked great.”

The Shockers responded with eight consecutive wins following the loss, jumping to third place in the American. Litzau said during the UCF match that she felt like the team finally realized their potential, which has led to a strong season so far in conference play.

“It’s really cool to see but also just the trust in our teammates and knowing that they’re going to do their jobs and then you are going to do your jobs as well and everything is going to come together not necessarily as planned but as to the best of our abilities and if it doesn’t go as planned and we are still going to give 100 percent and it’s been working and paying off,” Litzau said.

Lamb and Litzau have built a level of trust this season for her to make her own decisions on where to place the ball for the hitters and other strategies in games.

“You can tell yourself that you are good all the time but just hearing it from another source and your coach that has such an impact on how you play and what not is so helpful and just knowing too that even if you do make a mistake,” Litzau said. “Even if I were to make the wrong decision which I do, they still have my back and they’re still helping me through all the mistakes and growing from that.”