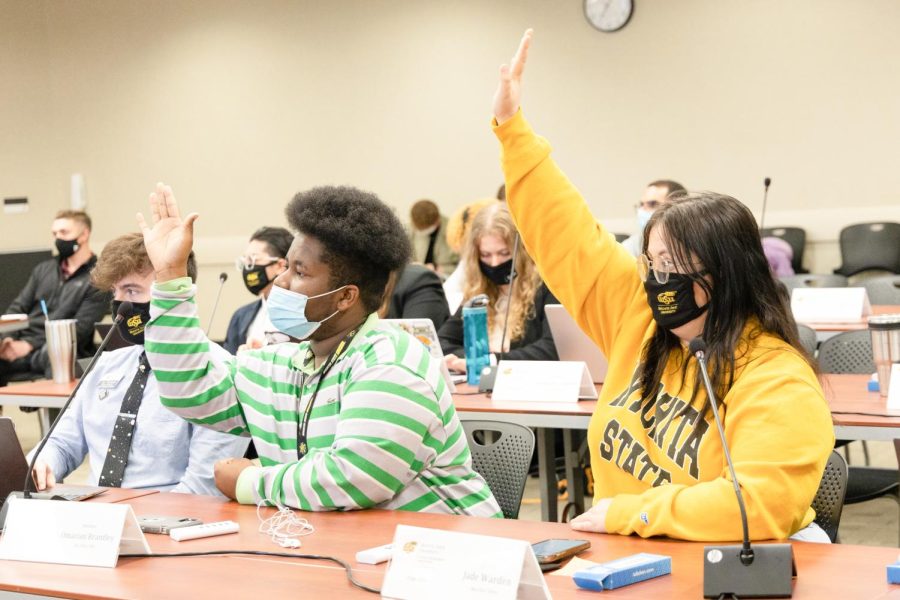 Senators Jade Warden and Omarian Brantley at the SGA meeting on Nov 3, 2021. A bill regarding transferring authority of recognizing student organizations to Student Involvement was tabled until next week.

A student senate bill regarding the transfer of authority to recognize student organizations to Student Involvement was tabled due to a high number of questions and debates from senators.

This bill follows a controversial decision by the student senate last month that rejected the conservative organization Turning Point USA registered student organization status. The decision was deemed unconstitutional by the Student Supreme Court and was overturned the following week.

The bill was introduced to the senate last week by Senator Ella Perkins.

“Whether the senate has true authority over recognition of RSOs has long been a question, and it has become increasingly clear through conversations that have been had over the last month, the denial of any student group RSO status will always have the potential to put the association in legal jeopardy,” Perkins said.

Perkins said that this forces senators to make false choices because voting no will always be questioned as a violation of the first amendment, and may force them to support a student organization that they don’t think represents their constituents.

Perkins said that both Gabriel Fonseca, Interim Director of Student Involvement and President Muma are in favor of this legislation.  The senate would still be able to reverse any decision made by the student involvement office by a two-thirds vote.

“I think the way we would maneuver this responsibility would be through and in conjunction with the Ways and Means Committee, that provides oversight to student organizations,” Fonseca said. “We’re also not opposed at all to notifying senate leadership that an organization had been approved and for them to have that information.”

During the voting period on Nov. 3, many senators voiced concerns over the bill, including Senator Tayton Majors who chairs the Ways and Means Committee — the committee that oversees RSOs.  He said this bill would take away student organizations platforms to share about their vision to SGA and give senators a chance to ask questions.

“This bill isn’t fully removing SGA’s involvement … Even if our current situation is legally questionable, this would not change with this legislation,” Majors said.

He also noted that there is nothing in this bill that guarantees immediate notice to senators about groups being denied or accepted.

Senator Jade Warden spoke in affirmation of the bill, and said that she doesn’t see any issue with the transfer of power.

“I don’t know why it would be a big deal to give them authority when their primary goal is to help students become more involved,” Warden said.

Senator Jozie Caudillo spoke in negation of the bill, and said that minimizing touch points and eyes on organization is dangerous and they need to create a new solution that is not taking away power from the senate.

“The impact of student organizations coming through the senate is very valuable,” Caudillo said. “The legal concerns that have been raised over the few weeks I think are honestly the fault of our part.  I think SGA as a whole could have prepared more for the scenario we were in.”

The bill will be voted on during next week’s meeting.