What you need to know about Jane Asinde 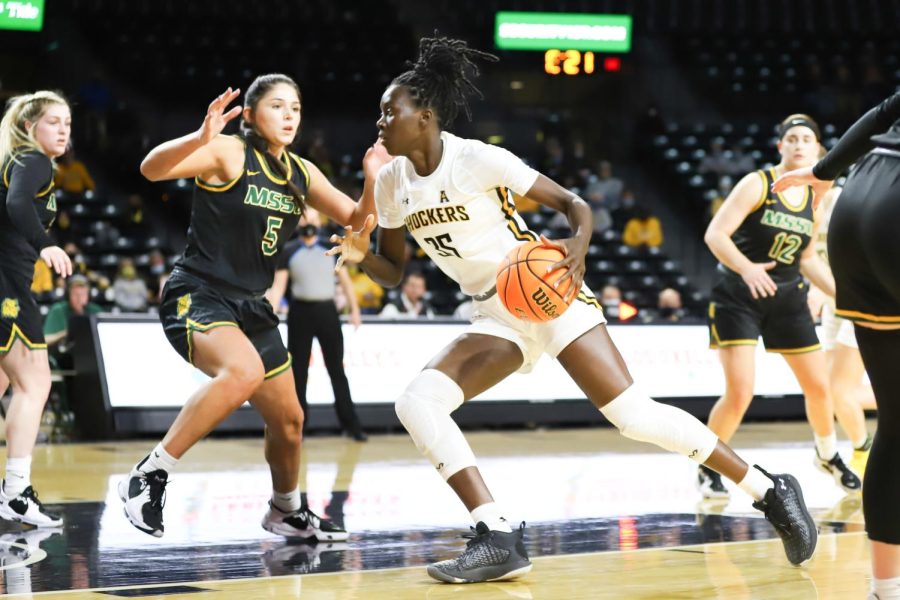 Jane Asinde drives towards the basket during the exhibition game against Missouri Southern State on Nov. 4 inside Charles Koch Arena.

Jane Asinde, is one of the top junior college transfers in women’s college basketball. She was the 18th – rated player in the World Exposure report for Juco rankings.

Asinde is originally from Kampala, Uganda, and said that she decided to come play for the Wichita State women’s basketball team without even going to a visit on campus.  Asinde transferred to Wichita State from Grayson Junior College in Denison, Texas. At Grayson she received WBCA NJCAA First Team All – American.

“So I came here because the coaches were really nice … Just talking to them I was motivated and like I knew this would be home for me,” Asinde said.

Asinde said she is excited about the Shockers upcoming season and seeing what all her team will accomplish.

“I’m looking forward to winning everything,” Asinde said.  “I want to win everything, and I believe this team can do it all.”

Along with being the best basketball player she can be, she also wants to help her teammates out and let them help her out as well.

Asinde said that everyone that she has met at Wichita State has been  friendly, and she enjoys taking her online classes so she has more time to sleep in.

After living in Texas, Asinde said that it feels cold here in Kansas compared to the Texas heat.  She also said the culture in America is quite different, such as the clothing and the food.

“So where I come from, Uganda, it’s kind of the friendliest country in the world so the people are really nice,” Asinde said.

“Everyone here is really friendly, everyone at WSU is friendly,” Asinde said.  “I haven’t met someone bad, here they are super friendly and nice people.”

Along with being a basketball player, Asinde said she has many hidden talents such as drawing.  She also loves to make new friends and meet new people.  With her new license, she looks forward to exploring other places in Wichita besides the basketball court.