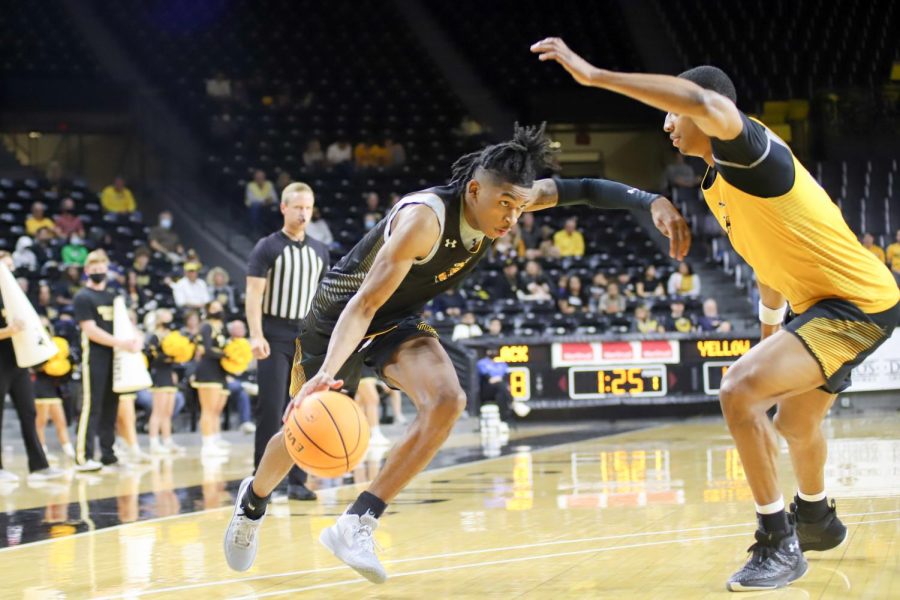 Freshman Chaunce Jenkins drives toward the basket during Shocker Madness on Oct. 12 inside Charles Koch Arena.

Returning for his second year for Wichita State, Chaunce Jenkins said he is coming back stronger than last season and ready to tackle this year with his teammates.

Last season, Jenkins was a freshman at WSU and was in his first year playing for Shockers Basketball when he signed in 2020.

Head coach Isaac Brown said that Jenkins has been working on his shots and improved over the offseason.

“Based on stats, he was our best shooter this summer,” Brown said. “He shot around 50%. We started practice and scrimmages, and he did a great job of making shots,” Brown said. “He’s gotten bigger and stronger. He’s a better defender. He’s been out maybe 5-10 days now with a knee injury, but hopefully we get him back soon. We expect he can make shots.”

After spending the offseason working on side shot, Jenkins agrees that he has improved and is hoping to shoot more consistently.

“I’ve definitely been improving my shot a lot,” Jenkins said. “Last year I could definitely shoot from three but I wasn’t as consistent as I needed to be, so I want to knock down shots very consistently.”

After not playing as much as anticipated his first year, Jenkins opted to stay with the team instead of transferring elsewhere. . Jenkins says that he sees this year really showing how far he has come and show the work he has put in.

“Dedication and just trusting that my story’s going to work out in the end and trusting all the work I put in,” Jenkins said. “I see myself having a breakout year, and putting people on notice. Just showing people that I can really produce.”

As the season comes to a start, he said that he anticipates a good year for the team and that they are going to show the work that they’ve been putting in over the offseason.

“We’re coming in with a chip on our shoulder, they’ve got us ranked fourth so we’re going to come out and play with that same edge as last year and hopefully that gets us far,” Jenkins said, “I see us going far, I see us getting back where we were last year in the conference and doing well if not better.”