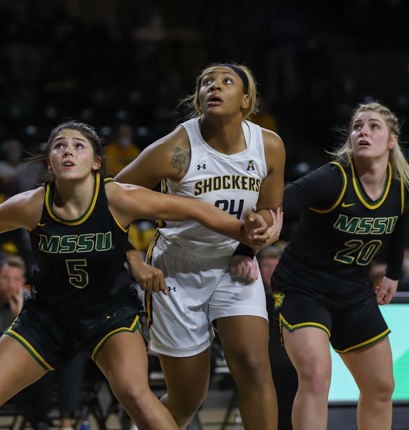 Trajata Colbert battles for a rebound during the exhibition game against Missouri Southern State on Nov. 4 inside Charles Koch Arena.

The women’s basketball program at Wichita State has either a losing or average season prior to their upcoming 2021-2022 season. Senior forward Trajata Colbert hopes that the women’s team can change that this season. Colbert started 14 of the Shockers 18 games last year. She had a career high last year of 27 shots which was ranked third in the American Athletic Conference.

Colbert said she sees herself in a leadership role this season due to it being her last year in the program. Her leadership skills have been noticed by other players. One of those players is freshman center Ella Anciaux.

Anaciaux said in an interview after Shocker Madness in October that Colbert has been a mentor to her while trying to adjust to the speed and intensity of Division-I college basketball.

“She’s helped me a lot just going against her, being able to batter against her and give me pointers,” Anaciaux said. “Like she’s been a big supporter of me since day one so I really appreciate her and all the other posts that I get to work against everyday.”

Colbert said she and some of the other players have been trying to step up and make sure the younger girls kown the expectations of the program. She said senior guards Carla Bremaud, and  Seraphine Bastin have had a leadership presence on the court as well so far.

Colbert said that the Shockers show strength in guard play this season with handling the ball, and getting it to the post. However, she mentioned junior college transfer forward Jane Asinde as someone that she’s excited to watch come game time.

“Newcomer Jane, I feel like she’s a great post, great addition to the post squad,” Colbert said.“She can finish around the basket, she can rebound really well.”