Adams prepared to produce second winning at the helm 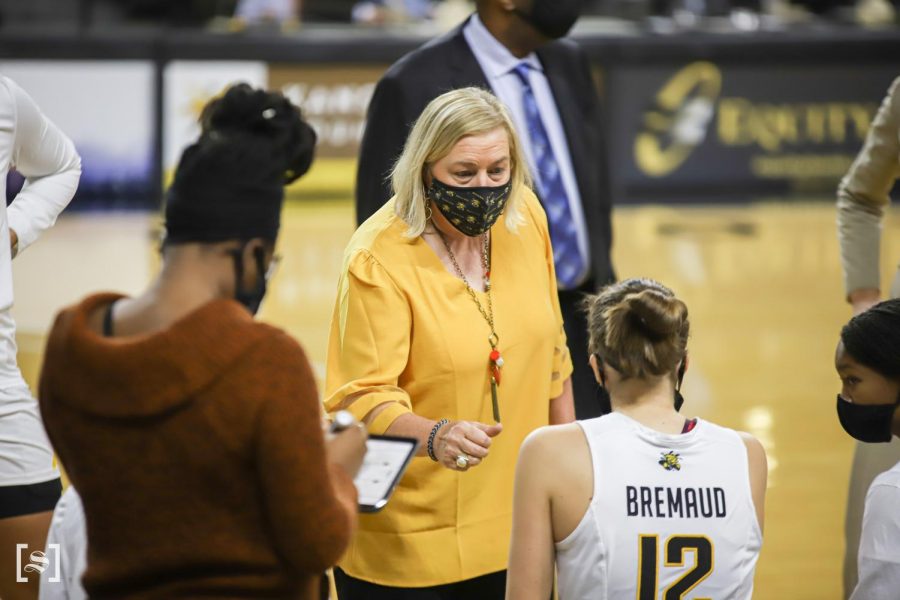 Head coach Keitha Adams talks to junior Carla Bremaud before the game against Southern on Dec. 4 at Koch Area.

After a tough season last year of missed games, postponed games, and missed practices due to COVID-19, head coach Keitha Adams of the Women’s Basketball Program at Wichita State University said she and her players are fired up for a new season of basketball this year.

“I think we went through so much last year and a small dose of it at the very beginning so you know you have to make some choices and these guys put a lot of time and a lot of hours into practicing and so you just want for your players to be able to play and be able to ,you know, experience the game and experience all that their working so hard for,” Adams said.

Last season there were times Adam’s team would only have five players at practice and seven or eight players at games due to illness and quarantine rules. She said it was unlike anything she’s experienced in her 30 years coaching women’s basketball.

“So we went through some tough times but we hung tough and we got through it and I think we’ll be mentally stronger this year because of going through that last year,” Adams said.

Adams is entering her fifth year as head coach of the women’s program for the Shockers. Last season, her team posted a 6-12 record. During the 2019-2020 season, Adams’ team posted their first winning record under her. A winning record and then some is what Adams and her team hope to accomplish for the this season.

“We want to be in there for the hunt for the conference championship, and get to the NCAA Tournament,” Adams said. “That’s what we’ve been working hard for and so we’ve got some good goals. We want to play some great basketball at home to give our fans some joy and something to get fired up about so those are our goals.

Adams returns seven players from last year’s roster. She mentioned the leadership and presence that some of her returnees have been showing on the court so far this season. Some of the returners she brought up are senior guards Cara Bremaud and Serphanie Bastin, as well as senior posts Asia Strong and Trajata Colbert.

In addition to her returners, Adams has seven freshmen on this season’s roster and one junior college transfer. She said she feels like her team has a nice mix of guards and post.

“With Jane Asinde and Ella [Anciaux] are two post players that add some depth, for us in the post,” Adams said. With our guards I mean Nhug Bosch [Duran] is really fast and she’s from Spain a good little point guard and good shooter. I think Melissa [Secchiaroli] and Tanya [Platonova]  are both guards that you know were looking for them to bring offense to the table.”