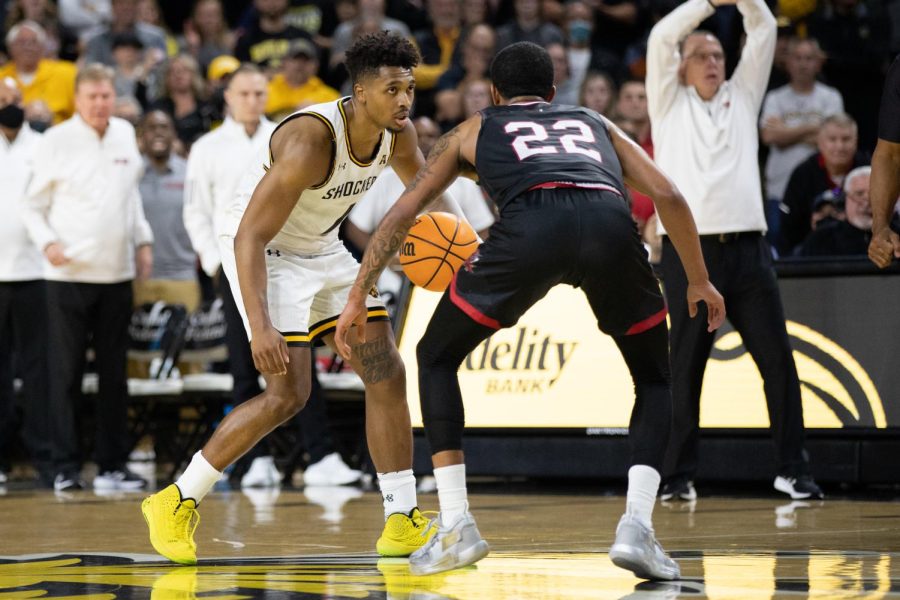 Tyson Etienne looks to attack during the final possession against Jacksonville State on Nov. 9 inside Charles Koch Arena.

By halftime, the Wichita State men’s basketball team was trailing in their season opener. They couldn’t get shots to fall and they played rushed, according to Head Coach Isaac Brown.

However, by the second half the Shockers executed and sealed the deal after sophomore guard Tyson Etienne made a three-point jumper with 2.2 seconds left on the clock.

“The second half once we started executing, once we started to make shots,” Brown said. “So proud of those guys for stepping up to the foul lines. Going 12 to 14, and sometimes you gotta make free throws in order to win close games.”

The Shockers defeated Jacksonville State University 60 – 57 on Tuesday evening. Etienne led the Shockers in points by scoring 16 and had four rebounds. After receiving multiple honors and preseason awards, Brown said that Etienne proved he was the type of player that makes big shots and steps up in a high pressure game situation.

“I’m happy for the kid,” Brown said. “We wanted to get the last shot but that’s the shot he takes a lot in practice. I would prefer him to drive but he makes that shot a lot in practice you know. He’s one of those guys who works on that. Everything he does in a game he does in practice so I seen it a lot.”

The Shockers stuck to the tough minded defense mentality that they are known for against Jacksonville State. Junior guard Dexter Dennis did not get many shots to fall in the first half but eventually he got his shots to fall by scoring 14 points on the night and grabbing eight rebounds.

“You know what I’m always telling Dexter to keep shooting,” Brown said. “I’m not worried about you making or missing shots. I want you to take them. I got all the confidence in the world that you can make this shot. Dexter Dennis stays on the basketball court because he defends.  That shot is going to fall. We not worried about that. I want him to keep taking that shot don’t think twoice about it and in order to make that shot you gotta take it so I want him taking them.”

A huge momentum shift for the Shockers was tying the game up at 45 with about eight minutes left in the game. Freshman forward Kenny Pohto scored on a fast break dunk off a no-look pass from Etienne. Pohto scored eight points, and had four rebounds against Jacksonville State.

Despite a successful performance in the season opener for the Shockers, Pohto almost didn’t get to play due to sickness. However, he joined the team for part of warm ups and saw 18 minutes of action for the Shockers.

“I thought he was great,” Brown said. “You know for a freshman to come play in that environment against a veteran team. He can make shots. He’s got some good offensive rebounds, and I thought he defended well in the paint.”

Etienne said he wasn’t sure if fans realized how much energy Pohto’s dunk created for the team and for the fans throughout Charles Koch Arena.

“I mean it’s energetic, you know, especially when you get a stop,” Eitenne said.You know you wanna capitalize on it you know. You don’t want to go down there and take a bad shot you know or miss a shot.

Dennis said the Shockers facing some adversity in games at the beginning of the season will help them out further down the road.

“Everybody can cheer and clap when you’re winning but when you’re losing who has that same attitude you know,” Dennis said.