Shockers get revenge by sweeping Tulane 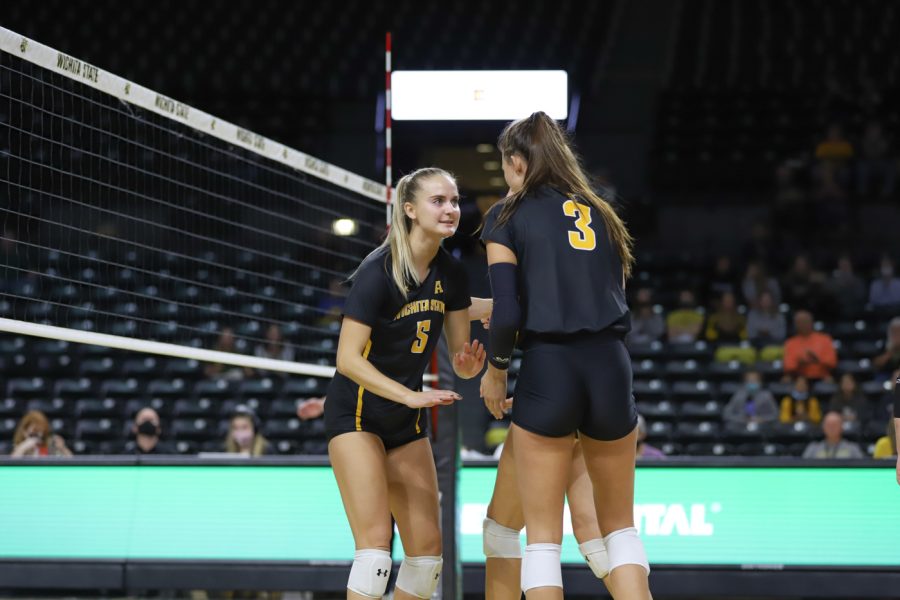 Kayce Litzau celebrates with Brylee Kelly after a point during their match against Tulane on Nov. 7 inside Charles Koch Arena.

In the Shockers first conference game of the season, Tulane beat the Shockers by winning three out of the four sets which is where that 1-3 score comes from.

Head Coach Chris Lamb decided to take a different game approach against Tulane the second time of round. He and his team decided that they would take their focus off of Tulane’s best hitter and see if they could expose the other players’ weaknesses on Tulane’s roster. Lamb said his team did better against Tulane’s top hitter after not preparing for her.

“It’s frustrating when you are not able to figure things out,” Lamb said. “You figure things out and you still can’t deal with it. I know that might be even more frustrating to some people but you start to feel like you are getting it and sooner or later you get some touches or you get some digs so I felt like we were much more understanding of a couple of their attackers.”

The Shockers have been trying to adjust their block all season long. The Shockers lost freshman middle blocker Lauren McMahon early in the season due to an injury so the pass game was something Lamb knew his team was going to need to adjust to.

“We’ve been getting good value out of that and today if you look at the stats, that’s where we made our biggest gap against Tulane is the certain pass game,” Lamb said.

Another key component to the Shockers win on Sunday was freshman middle blocker Morgan Stout’s ability to convert on slides and get behind sophomore setter Kayce Litzau.

“Morgan was put on this Earth to be an M1 and you know it just takes time to get that and the rhythm with her and her center and her practice time has been cut down so you just rely on Morgan and the athlete to go find that ball and go up and get it [and] make plays,” Lamb said.

A huge key to the Shockers offense against not only Tulane but against Houston last Friday, was sophomore opposite hitter Sophia Rohling’s ability to break out of her shell with her hitting. Rohling had 28 kills combined against Houston and Tulane. Rohling was named first team in the American Athletic Conference last season as a freshman.

The Shockers will be back in action on Wednesday against Tulane. First serve is scheduled for 7 p.m. inside Charles Koch Arena.