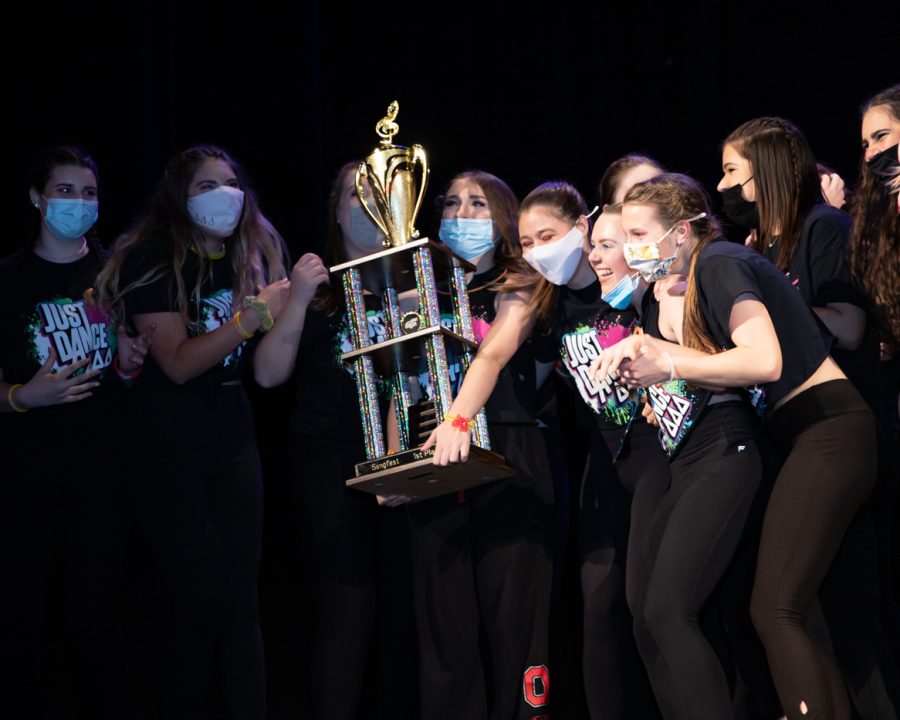 Delta Delta Delta sorority comes in first place with their Just Dance-themed performance. Songfest was held at the Orpheum Theatre on Nov 7.

Tri Delta took first place at the Songfest 2021 event with their Just Dance themed performance Sunday night. Tri Delta was followed in placement by Sigma Alpha Epsilon coming in second and Delta Upsilon placing in third after performing for the first time in four years.

The sorority performed with eight other fraternities and sororities Sunday night, at the annual lip sync battle event hosted by Wichita State. The event had been on a two-year hiatus due to the pandemic, but brought the event back this year in full swing with dancers and watchers filling the theater with excitement and energy throughout the night.

The theme for the performances this year was alphabet soup, where the artist or song they were dancing and lip-syncing had to start with the letter they drew prior to the event at the captain’s meeting.

Tri Delta drew the letter J and went with the theme “Just Dance”, with dancers pretending to be playing the Wii game and others acting as the characters from the game.  Captain Megan Secrest said that after weeks of practice leading up to the event that she thinks the night went how they had hoped it would.

“I thought it went really well,” Secrest said. “I was so proud of everybody. We just kind of did what we had practiced, which is what you can only hope for.”

Dances ranged from Looney Tunes themes, with dancers dressed as the cartoon characters, a Just Dance theme, and other types of dances.  Performers talk about how preparing for the event went the weeks leading to the event and how it was to be on stage after the event being held off a year.

“I think it has gone above and beyond my expectation,” Christi James, a sophomore nursing student at Alpha Phi. “It’s been such a fun experience. And the show itself, like, the energy here is so high.

“It’s really nerve-wracking, because you never know what your other teams are going to bring to the table. But all in all, I think we prepared really hard, and it paid off.”

Delta Upsilon fraternity council president and Songfest captain, John Ramey, said that the fraternity’s performance was to show their authentic and real selves and just have fun with the night.

“For our fraternity, we’ve always taken pride in, like, quality over quantity,” Ramey said. “So that was showing up tonight just in kind of goofy costumes. We wanted to stay true to the type of men that we are.

“Our motto is building better men and for us, that means just being confident in our authentic selves. And so I think we did that tonight.”

“Just looking at the crowd’s reaction for Corey’s solo, the way the mutant ninja turtles worked out, like, really, every piece of it came together, and we were ourselves for all of that. Maddie, our sweetheart choreographer, helped us out immensely, we wouldn’t be here without her,” Ramey said.