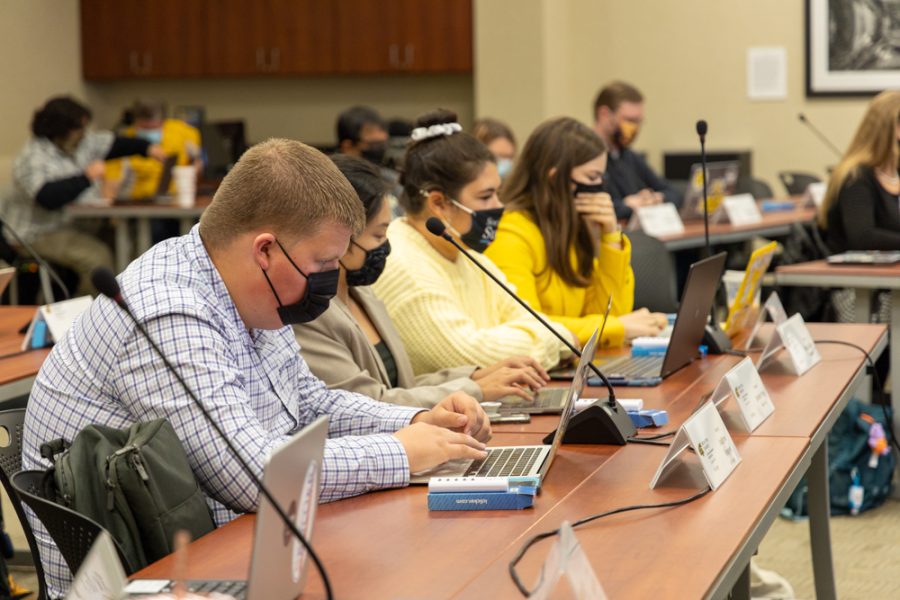 Senators at the SGA meeting on Nov 10, 2021. A bill regarding transferring RSO granting authority to Student Involvement was rejected during the meeting.

A student senate bill regarding the transfer of authority to recognize student organizations to Student Involvement was rejected after being tabled last week.

The vote came after much debate on various options to amend the bill, create a new committee to craft a new piece of legislation, or to kill the bill altogether.

This bill follows a controversial decision by the student senate last month that rejected the conservative organization Turning Point USA registered student organization status. The decision was deemed unconstitutional by the Student Supreme Court and was overturned the following week.

The bill was introduced to the senate last week by Senator Ella Perkins.

“Whether the senate has true authority over recognition of RSOs has long been a question, and it has become increasingly clear through conversations that have been had over the last month, the denial of any student group RSO status will always have the potential to put the association in legal jeopardy,” Perkins said.

Last week, the senate voted to table the bill after a large amount of debate from both sides. This week was no different. Student senators went back and forth about the different options for roughly an hour.

The main source of debate was surrounding whether to kill the bill or create a committee to re-evaluate what the bill looked like.

“I believe there are great intentions with this bill,” Ways and Means committee chair Tayton Majors said.  “We need more time…In the end, let’s just vote to kill this bill tonight, I think this is the best potential solution.”

Many senators voiced concerns that the bill was created too quickly to provide proper thought.

“This bill has a lot of traction and it also has a lot of different viewpoints,” Freshman Senator Anne Wasinger said.  “We can see that there are a lot of people who care how this decision is made.  One of my reasons for voting against this bill tonight is that a lot of those discussions were not made in the week that we tabled… And that all comes from how quickly this bill was formed.

“And, you know, it was a very intense time for this organization, I understand the pressure from outside sources … But I do truly think that this bill was done too quickly and I think that this is evidence of that, that so many chairs are interested in developing this bill.”