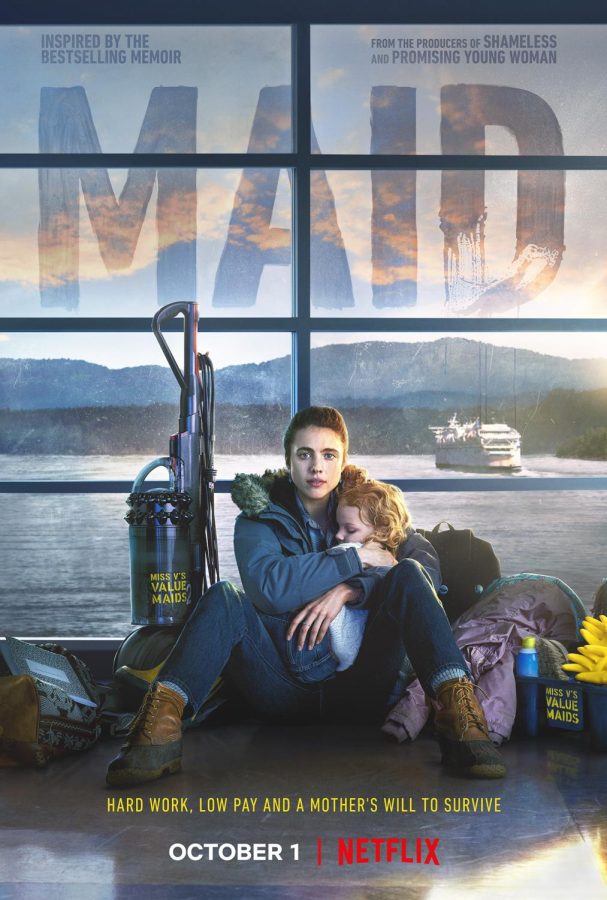 “Maid” on Netflix managed to tell both a heartbreaking and beautiful story at the same time, while also highlighting the struggle that many women face while struggling to escape their abuser and the difficulty of navigating a system that is meant to help you.

“Maid,” a miniseries released on Netflix on October 1, has remained in the top 5 shows most ever viewed since in many countries, according to Forbes.com.  The series is inspired by the 2019 memoir “Maid: Hard Work, Low Pay, and a Mother’s Will to Survive.”

The series starts out with Alex (played by Margaret Qualley) escaping her house in the middle of the night with her two-year-old daughter, Maddie, which we soon learn is because her husband, Sean, is abusive.

The show does a great job of portraying how Alex has to think quickly on her feet to survive, showing how her already small amount of money drops with every purchase,  she has to think two steps ahead at all times. And the acting is phenomenal, I was on the edge of my seat the whole time.

Alex works with a Social Worker at various points during the episode, and the audience can’t help but also feel frustrated at the various hoops that she has to jump through in order to just get a place for her and her daughter to sleep.  These scenes were very realistic to me and offered the audience a point of view that some of them have or never will experience.

While the thing that makes Alex run away initially is Sean punching the wall next to her head, a large amount of the abuse in their relationship is verbal.  We see Alex transform through the series, as she receives education at the domestic violence shelter and is finally able to recognize the verbal abuse in her relationship as abuse.

The series did a good job of painting Sean realistically with both good and bad sides, showing how hard it is to recognize and have other people recognize an abuser.  The series also shows Sean’s struggle with alcoholism and his realization that his family might be safer without him until he tackles his addiction.

Ultimately, I think that this series highlights many societal issues that people struggle with all over America, and gives a voice to a lot of people and problems that need to be fixed.  I recommend that everyone should watch this, and would love to see similar series come from Netflix.