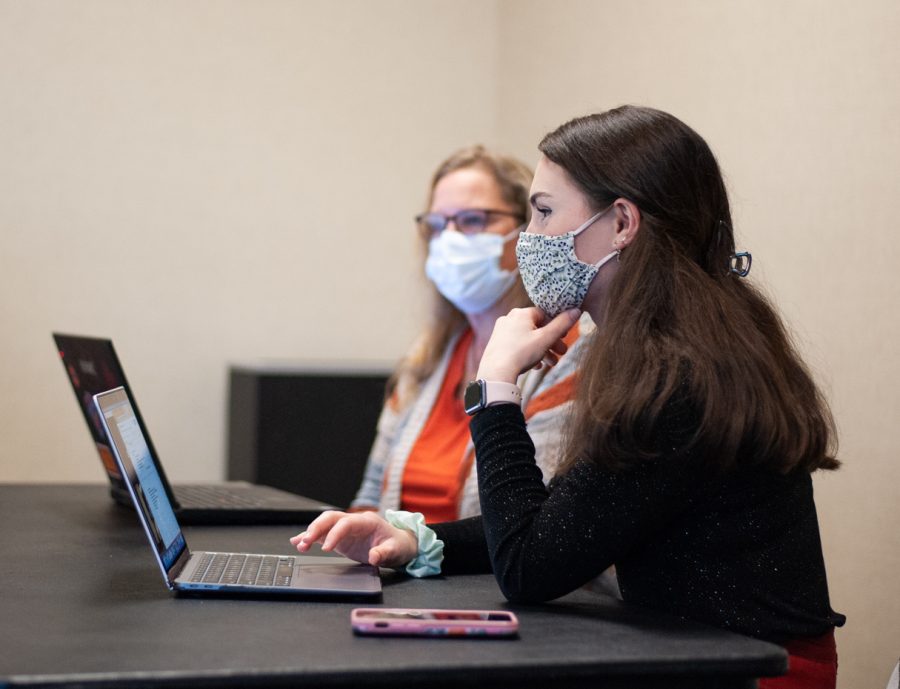 Alice Fitzgerald, The Green Group president, and Chris Hepner, applications engineer at NetApp, discuss future plans and events with other Green Group members on Nov. 10, 2021. The group has weekly meetings on Wednesdays.

On Oct. 10, The Green Group met for their weekly meeting to discuss future events for the semester, including the new compost bins going into the community garden, a recycled art contest in March, a move-out event for the Spring semester where students living on campus could “recycle” items that they don’t need anymore, and invited NetApp employees to discuss collaboration.

Chris Hepner, applications engineer at NetApp, said that they would be moving into their new building on campus in January and wanted to reach out to the group to see how they could partner on upcoming projects.  Jason Unrein, software engineer at NetApp, mentioned mentoring students in the group to help with advice on projects and sponsoring events.

“Getting all of the companies to help the campus more … I would like to help you guys succeed however you can, help however we can on the side,” Unrein said.

The compost bins, which are available for all to use to dump plant-based products, should be going into the Community Garden sometime before the end of the semester.

Fitzgerald mentioned working with Chartwells dining to make recycling more noticeable for students during things such as catering events, such as adding signs above bins.

“They have a huge grasp on what we are able to do on campus,” Fitzgerald said.

Fitzgerald said she talked to housing and residence life about a move in, move out event, so that items that students didn’t need when they moved out could be recycled to another student for a much cheaper price than buying new.  They also want to partner with Shocker Support Locker during this event to ensure access to low-income students.

“I think the move-out event where we are kind of gonna be collecting, you know, just extras that people have, that’s gonna be one of my favorite events if we can carry it out,” Fitzgerald said.

The Green Group also got advice from NetApp employees on how to create a recycled art contest, something that they had done previously.  They discussed how to get people involved through monetary prizes and having an art major and computer science major partner up to create something out of e-waste.

“There’s a media gallery downstairs and it always includes student submissions … I know that they are definitely open to the students,” Fitzgerald said.

For future collaboration projects between NetApp and The Green Group, they are planning two paper shredding and e-waste events where people can bring paper and e-waste to be recycled that they don’t need anymore.

“In terms of more fun events, I’m really hoping that earth day brings more speakers, I think that’s really something to look forward to is getting experts to come and talk on campus about sustainability,” Fitzgerald said.

Fitzgerald said if students don’t have the time to be active in the group, they can still focus on actively recycling and being conscious about turning lights off and conserving water.

“Showing support, if you don’t want to come to meetings or can’t come to meetings maybe just send an email to like a professor, or your dean, or anyone in administration saying, ‘Hey, I think that this is a good idea,’ because more often than not, just sending those random emails to people who can actually make change, does it,” Fitzgerald said. “It happens.  We just need more people voicing that.”

Lydia Lavacek, a senior double majoring in Spanish and Geology and VP of membership, said that she decided to apply for the position after participating in the group freshman year.  She can be reached at [email protected].

“Membership is reaching out to people who want to join the group, kind of letting you know what the group is about and who to put them in contact with if they are like interested in the garden or volunteering, and just helping people join the group,” Lavacek said.