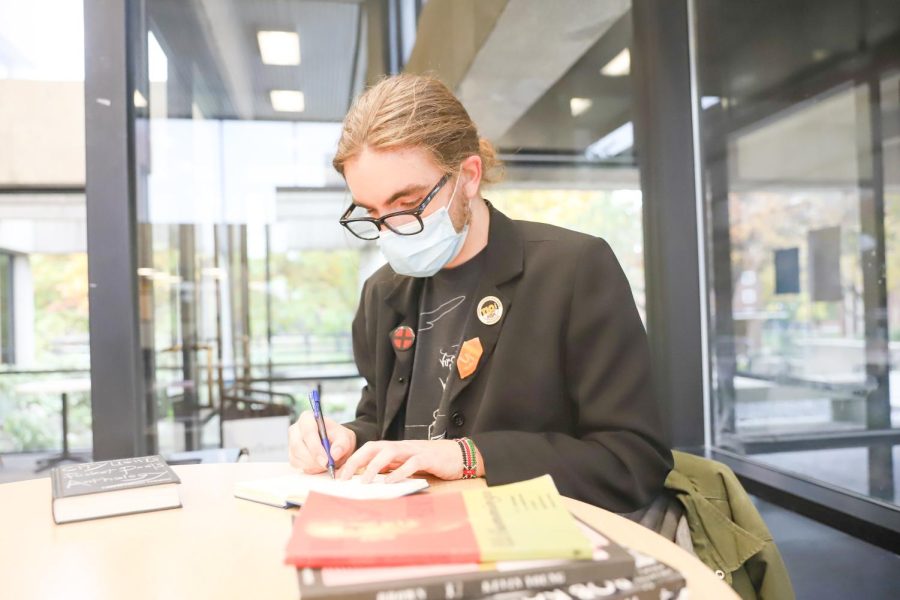 Jouquin Fox, president of the Fairmount College Student Advisory Committee, writes poetry in Ablah library on Nov. 10, 2021. He is a junior junior double majoring in creative writing and English language and literature.

Jouquin Fox, the new president of the Fairmount College Student Advisory Committee, nominated himself for the position in order to create a bigger emphasis on creativity and ideas.  His goal is to hopefully provide more creative outlets for students at WSU as well as job opportunities for students  in the Fairmount college at places like NIAR after they graduate.

“I thought it would be good for an artist to be on the committee,” Fox said.

Fox is a junior double majoring in creative writing and English language and literature, and said that the committee will be making steps this year to get recognized student organization status from SGA.

“We created the committee so that we could have better communication,” Fox said.  “So we’re trying to just get a committee set up with some students who really care about the college and want to have a communication with the bigger caucus and students in general.  Hearing their problems and seeing if we can do anything about them.”

Jouquin is the former undergraduate poetry editor of Mikrokosmos,  the literary journal of Wichita State’s MFA program, as well as currently serving as a liberal arts and science senator on SGA.

“As much as it’s romantic for a writer to just kind of sit in a hole and write all the time, it’s good to explore and figure out stuff, so I wanted to see the smoke and mirrors of it all, see like how stuff actually gets done,” Fox said.

Fox said he would like more creative writing outlets available to students beside Mikrokosmos and The Sunflower.  He said is working on publishing an independent poetry magazine made up of WSU students.  If interested in contributing, you can reach out to him at [email protected].

At previous committee meetings, Fox said that they have discussed working with bigger companies on campus to figure out a way for the Fairmount college to be more adequately represented in the job market.

“I feel like there’s a lot of open job opportunities and a lot of information about engineering students specifically, and not so much about writers and stuff,” Fox said. “That might be a larger issue with the full job market, I think we are trying to figure out a way for writers and philosophers and people to be hired by a place like NIAR, which is kinda like, ‘why?’  More to generate ideas and help with their writing so they can focus on the engineering, you know.”

Fox said that he hopes to help voices be heard as well as make some sort of change on campus in his position on the committee.

“Just the economy of the United States and the world in general where we produce like the material goods, there needs to be an emphasis on the idea creation and making the human more full,” Fox said.  “America has largely been more a transfusion of cultures around the world, and I think with the more emphasis on creating more ideas, making humans more full there would be a more American culture besides just the ideals that are falling apart.”

Fox said he is going to get his master’s in poetics, and hopes to one day be a professor and writer.  He also writes rap music and has performed at Kirby’s four times this year.

“I have a couple different avenues, I’ve been like doing music for a while so during my college career I’ve specifically tried to use my sort of hip-hop stuff with actual poetry because they do go together,” Fox said.  “Rap is a form of poetry, poetry is very musical so I’ve been trying to fuse those two together.”

Fox said that he incorporates Wichita events into his music, such as mentioning the 13th and Oliver street shooting that happened last year in one of his new songs.

“My music is very like authentic, a painting or a poem of some sort, where it’s just me and the death of the artist idea, where I’m just committing myself fully to it,” Fox said.

Another thing that Fox would like to see is more of a connection between the arts on campus and the community.