Volleyball continues winning ways in second half of the season 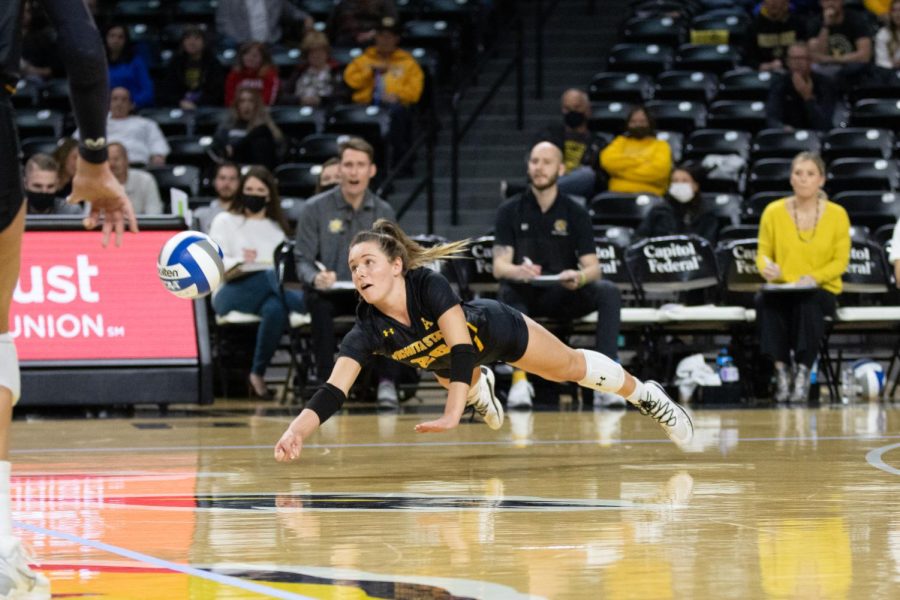 Bryn Stansberry dives for a ball during the game against Temple on Nov. 12 inside Charles Koch Arena.

The Wichita State volleyball team proved they can play with anyone in their conference once again this week, after beating Tulsa and Temple University for the second time this season.

The Shockers played five sets with Tulsa on Wednesday and won 3-2.

“The last three sets you know we kind of saw what Tulsa was made of,” head coach Chris Lamb said. The Tulsa that beat us 1-3, the Tulsa that beat Houston, so we knew they had it in them. We just hadn’t seen that yet so they sort of came back to who they were and put up a fight.”

The Shockers clicked well in several areas on the court against the Golden Hurricane. Freshman middle blocker Morgan Stout recorded 11 blocks and 13 kills.

Lamb said that Stout is continuing to improve with her placement on the court and reducing mistakes with blocking.

“You know there’s some rotations in our conference where we have a pretty good idea where the threat is coming from and I’d be as happy as anybody to have her as close to Kayce Litzau [sophomore setter] and provide some resistance and you certainly saw that tonight,” Lamb said.

Freshman outside hitter Morgan Weber said the team needed to do something different in their fifth set against Tulsa after dropping set three and four.

“I feel like we had a lot more energy in the fifth set,” Weber said. “We knew we were going to have to change something, a lot more communication as well. Everything was a lot more urgent and everybody was knowing what they were going to do and we just communicated really well to let everybody know what their job was and what they had to do.”

On Friday, the Shockers swept Temple in three sets. However, Head Coach Chris Lamb said it was not exactly his team’s best game.

There is no doubt that the Shockers are a young team this season. Most of their starting lineup consists of freshman and sophomores in a conference that has teams mostly headed by juniors and seniors. However, Lamb said that his team has the ability to finish their regular season strong in conference play.

“At the beginning of the season I don’t think anyone in our league would have thought Wichita State at Cincinnati late November was going to have some circumstances,” Lamb said. “Cincinnati needs to get these and find their way in the tournament and we have an opportunity to sweep Cincinnati.

“We are going to have to be great up there and on and every team we are playing down the stretch here we’ve beaten, so you’d like we can do it and if we can get together and clean it up play hard and communicate better, we can go out there and make some magic.”

The Shockers will take on the Bearcats this Friday at 5:30 p.m. The match will also be broadcast on ESPN+.