Council leads the Shockers to close victory over South Alabama 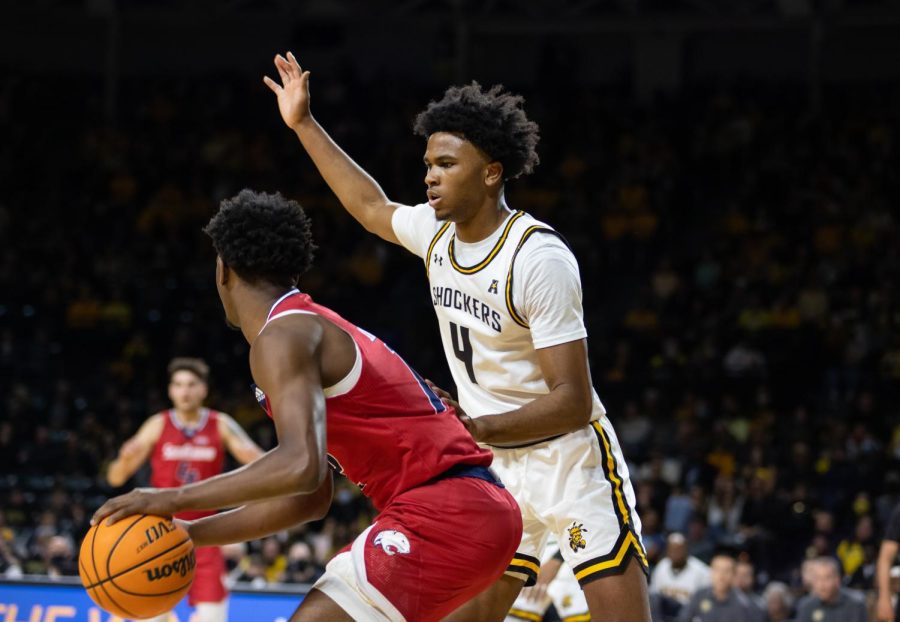 Photo by Mia Hennen / The Sunflower

Ricky Council IV defends the ball during the game against South Alabama on Nov. 13 inside Charles Koch Arena.

“You would rather figure out your problems winning than losing,” junior guard Dexter Dennis said.

The Shockers continued its struggles offensively, shooting 37.3% from the field and 30.8% from the three-point line. Sophomore guard Tyson Etienne was also out of the starting lineup due to sickness. However, he still played.

The Shockers figured out a way to win by switching up to a 2-2-1 zone in the second half to force South Alabama to take jump shots. Besides the game strategy though, the Shockers had other players step up tonight that weren’t necessarily key starters like junior forward Morris Udeze, Dennis or Etienne.

Freshman guard Ricky Council got his second career start as a Shocker against South Alabama, including his first of the season. He had 19 points, eight rebounds, and three assists. Council did not know he was starting until the about the 20 minute mark of warmups.

Council said he’s been trying to perfect his catch and shoot rhythm prior to this season. He said it felt like it paid off for him tonight in terms of helping his team get the win.

“I just shoot it and it feels normal to me,” Council said. “So just to see it go in.. it was great. I’m just happy right now.”

“He came in and gave us a spark in transition and he got to the rim a couple times,” Brown said. “He had to get back and help a lot. Gave some other guys some extra shots.”

Jackson only had five points, three rebounds and one assist but the stat sheet did not do justice to the energy that the sophomore forward contributed to the matchup against South Alabama.

“Tonight he gave us a big spark,” Brown said “He came in and got every 50-50 ball. He knocked down a three. He played some tremendous minutes.”

Jackson said he doesn’t focus on how many minutes he’s played so far but instead about being prepared.

Brown said that their schedule will not get any easier after close games to Jacksonville State University and South Alabama.

“These teams that we play early on I think both of those teams have an opportunity to win their conference,” Brown said.

The Shockers will play Tarleton State University on Tuesday, November 16 at home. Tip-off is set for 7 p.m