Despite university’s initiatives, faculty still not representative of students 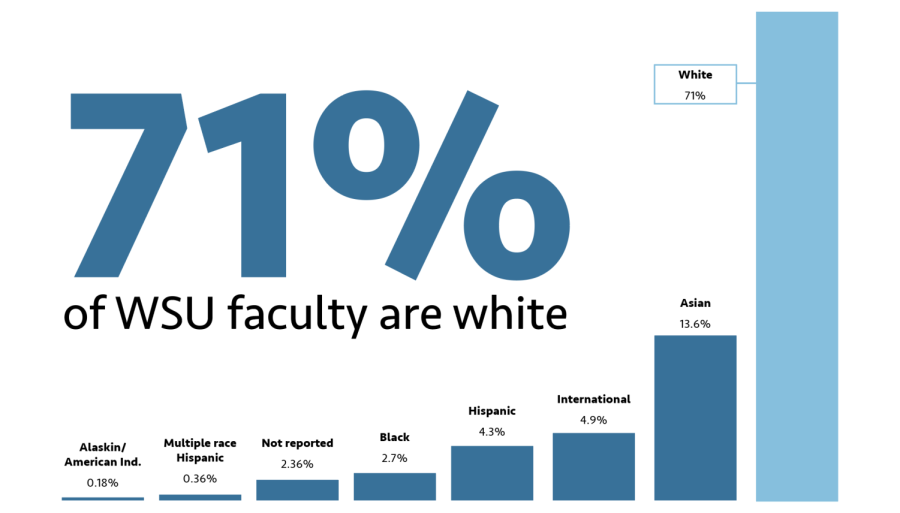 Infographic by Thy Vo / The Sunflower

On the university’s website, Wichita State calls itself the “most diverse college in Kansas.” But according to data received from the provost, 71% of full time faculty members are white.

Berry said working in a predominately white institution has put pressure on him that other faculty members may not have to face.

“Feeling like when you’re at meetings, you’re almost speaking on behalf of everyone,” Berry said. “And just kind of always having that in the back of your head with everything that you do … Taking into consideration that sometimes my students, I’m the only Black professor they’ve ever had, period, in their entire life.”

Berry said he wants the university to provide efforts for their faculty of color to not only get hired, but also advance in the university.

Of the 13 members of the president’s executive team, two are Black. There is only one dean of color.

The university is currently creating a five-year diversity, equity and inclusion plan that focuses on diversifying campus.

“The goal is to make our campus reflect diversity in all aspects, not just in color, not just in race,” Chief Diversity Officer and Vice President Marche Fleming-Randle said.

Fleming-Randle, who now oversees the university’s diversity initiatives, said when she first started at the university 14 years ago, she noticed a lack of diversity.

“I said, ‘Oh, I’m not going to stay long, a couple of years as an assistant dean then I’m going to move on,’” Fleming-Randle said. “As I saw things develop, and I figured you know, when you know better you do better. If I leave, who’s going to stay here and do the work?”

Fleming-Randle said since then, she has focused on promoting Wichita State to qualified candidates. But, she said, it can be difficult to get diverse faculty.

“You have to get people to come to a predominantly white campus, some people don’t have that mindset,” she said.

Fleming-Randle said that retention of faculty and students of color continues to be a main goal from the university, as well as a focus to get more faculty of color in administration roles.

Fleming-Randle said that while people tend to focus on race as diversity, there are other ways the university can be more diverse.

“Diversity isn’t just about Black and white,” she said. “It’s about veterans. It’s about disabilities. It’s about LGBTQA. Just looking at somebody can you tell if they’re LGBTQA? Can you look at a vet and say he’s a vet? No.”

She said her goal is to make sure the university reflects being the “most diverse college in Kansas.”

“I just want [faculty and students] to know that they’re welcome, and that their concerns are going to be heard, and that we’re going to meet the classification of being the most diverse college in Kansas,” she said.

Berry said that while it’s important to push the university to strive to be diverse, he said it is not entirely the responsibility of the institution.

“And what I mean by that, from my perspective, is that, do I have the right to say yes or no? Yeah, for sure,” Berry said. “You know, and I think sometimes folks can put that weight on an institution and I feel sometimes that’s unfair.”

With roughly 1,700 undergraduate students, the business school is a popular school of WSU.

Business students have said the student body is diverse. However, many said they feel the faculty is lacking in reflecting that diversity.

Junior business student Aram Khader said that while the majority of her classmates are still white,, she sees progress in diversity of the student body as she continues her education.

“I definitely have some friends from different ethnic backgrounds in my classes,” she said. “I think we’re definitely making progress with that.”

Khader said studying management information systems, she has a majority of foreign professors. However, for her more basic business classes she sees a lack in diversity.

“From the faculty, I haven’t seen much diversity. Diversity between genders, but not necessarily ethnicities,” Meyer said.

“I know most of my teachers are white —a good mix of male and female. I don’t really know a lot of teachers in the business school, but the ones I’ve had have been along those lines,” Uhl said.

Barton School of Business Dean Larisa Genin said that diversity is a personal passion of hers.

“Diversity, equity and inclusive excellence is an important area initiative and focus in the business school,” she said.

“I think diversity and inclusive excellence is critical to any of our searches we’re conducting for new faculty and or new staff.”

As for future goals, Genin said a new plan will be unveiled next fall that can help further diversify the business school’s faculty.

“The strategic plan is built upon Wichita State’s mission and key strategic priorities and further defines how we are going to carry it out in the business school,” Genin said. “I think there’s an opportunity to continue to diversify our faculty population as we continue to attract new talent and potentially find ways for how our faculty population could be more representative of our student body.

“We really want to celebrate, welcome and ignite diversity and equity in the business school as we move along.”

Breaking it down by college: