Panel shares the positives of intergenerational teaching at Wichita State 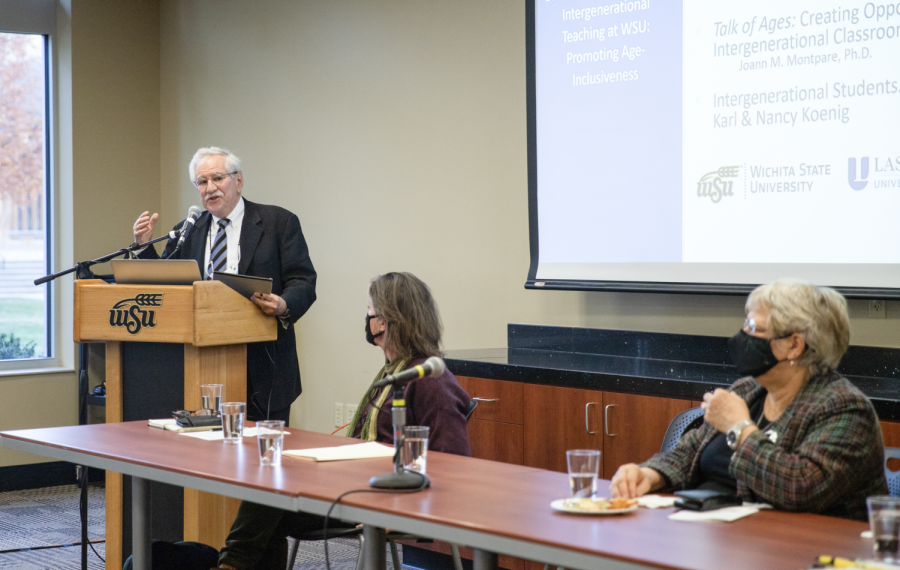 Professor of Psychology Louis Medvene speaks to the room of faclty at the Strategies for Promoting Intergenerational Teaching at WSU meeting. The meeting was held on Nov. 16 and in the Rhatigan Student Center.

The Census Bureau projects that in 12 years there will be more people over 65 than under 18.

“The whole gamut of our healthcare system is going to be impacted by this large number of older adults and people are not being prepared to work with those older adults,” Instructor Louis Medvene said.

So, how do we combat this? A panel was held in the Rhatigan Student Center on Monday, Nov. 15 to discuss that exact topic. The panel — called “Strategies for Promoting Intergenerational Teaching at WSU” — was sponsored by Wichita State’s Regional Institute of Aging (RIA).

Medvane said the best way to prepare for this change in numbers is to bring and promote more intergenerational teaching to WSU.

“Having an intergenerational student body is potentially a more effective way to teach new information about older adults, one of them being this idea of the longevity dividend,” Medvene said. “There isn’t any better way to teach it than to have people who are really still at the top of their games in the same classroom with younger students.”

Medvene taught a course last semester that did just that — brought in undergraduate students and older adult students in the classroom together to work together, learn together and collaborate in a way that they wouldn’t have the opportunity to do elsewhere.

“By having older adults and older students and younger students in the classroom, we have potential to create positive experiences and change potentially negative attitudes,” Medvene said.

The class chose four  topics to discuss: social media and aging, mental health and aging, attitudes towards aging, growing up: then and now and intergenerational contact.

WSU Student Aliya Jankowski took the class and attended the panel to discuss her experience.

“I just can’t really describe in words necessarily how awesome it was to be in that course,” she said.

Jankowski said that a lot of students signed up because they thought the title of the class, “OK, boomer”, was funny. But once they started getting into the class’ topics, her eyes were opened.

“Working with older adults in the class, my perspective widely changed,” she said.

“I had held the idea that getting older meant frailty, disability, meant disadvantage, meant that you’re sick and dying and you can’t really experience the good parts in your life,” Jankowski said. “But throughout the course I realized there is a big shift happening and successful aging …. Was something really new to me.”

Nancy, 74, said that she wanted to take classes to learn about where she was travelling to.

“Everybody said, ‘Why are you doing this?’ I said, ‘I want to go to school and I want to travel.’ So I took classes here related to where we were going to go,” she said.

Nancy took classes with her husband, Carl. He said that the interaction is the highlight of taking college classes.

“Generally it’s when I had a question and was looking for some information,” he said. “[Being] able to do that answered questions for me, but on the other hand, just being the old guy in a group of college students is really cool. I enjoyed the interaction.”

There are currently more than 400 lifelong learning institutes for older adults, many located on college campuses. Montepare said that the university she instructs at, Lassell University, is home to Lassell Village, a retirement community. A condition of residency is to take some of these classes.

Montepare said that not only do these classes provide opportunities for learning, but also provide ways for generations to gather together in other ways.

“Bringing younger and older learners together in activities that involve service, especially around issues of mutual interest, like social justice, and political engagement are good ways to build solidarity across generations,” Montepare said.

At a WSU angle, Montepare said that every university is different when figuring out how intergenerational teaching may look for them.

“We’ve also been learning through our age-friendly efforts that intergenerational interaction, you know, should not be a one way path, meaning that it’s not just about, you know, providing educational experiences for one generation via another generation,” she said.