‘I’m excited about the challenge:’ Shockers face big test with Arizona on Friday 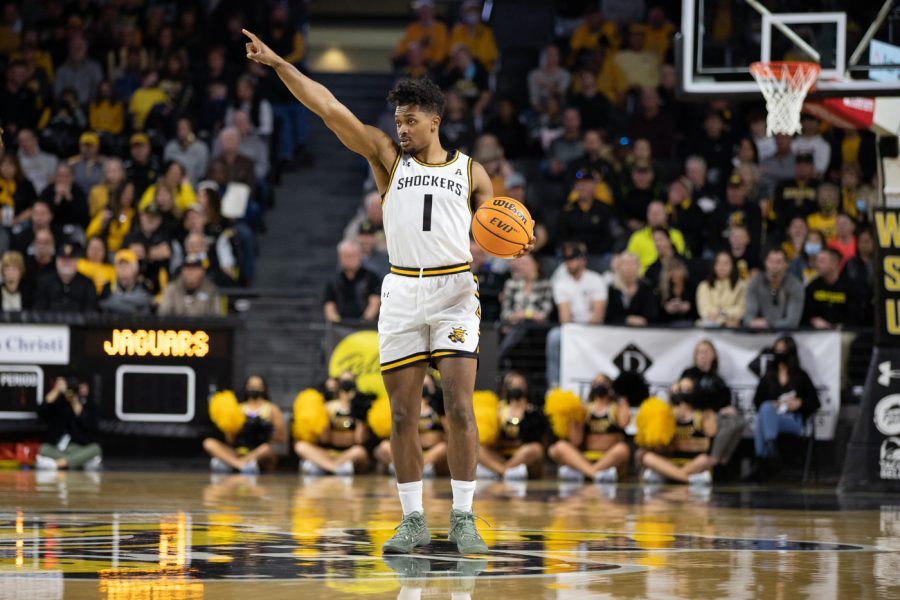 Sophomore Tyson Etienne looks to pass the ball against South Alabama at the Charles Koch Arena on Nov. 13

Wichita State is set for its biggest game of the season thus far, taking on the Arizona Wildcats in the quarterfinals of the Roman Main Event on Friday.

Arizona enters the matchup 3-0 on the season and is No. 26 in KenPom. The Wildcats are the first Power-Five opponent WSU faces on the season, as the Shockers look to notch its first quality win on their resume.

“I’m excited about the challenge,” head coach Isaac Brown said. “These tournaments are big time, they can definitely help you get into the NCAA Tournament with some quality wins. Arizona’s a quality basketball team. We’ve got to play well in order to win these games.”

The Wildcats enter the matchup with one of the top defenses in the country, ranking No. 22 in defensive efficiency. Here is a breakdown of what makes Arizona’s defense so difficult and how they’ve been effective through their first three games.

Arizona’s Frontcourt
Arizona presents the biggest challenge for WSU’s frontcourt so far this season with their size. Azuolas Tubelis (6’11) and Christian Koloko (7’1) have started every game for the Wildcats with the duo combining for 30 points and 13 rebounds per game.

Koloko has been effective on both ends of the court. He is shooting 76.2% on postups (16-21), while also collecting an 18.6% blocking percentage — the ninth best in the country.

Tubelis has played his best basketball this season in transition scoring 16 points off those possessions. Tubelis has also found success shooting from deep, going 2-4 on three-pointers.

“We’ve got to do a good job of doing our work early, not letting the ball come inside,” Brown said. “Our guards have to do a good job of getting handsy, trying to get deflections so the ball doesn’t go inside. We’ve just got to make sure we’re connected on defense because they’re a physical team at the four and the five.”

The Wildcats have been elite on defense on two-point shots, limiting opponents to 29.3% shooting, which is the best in the NCAA. Brown said it will be important for WSU to draw a second defender to create open looks on Friday.

“When we drive it we definitely want to create a help situation because they’ve got two big shot blockers at the rim,” Brown said. “We want to create double teams, kick it out to the open guy or dump it down to our big guys for easy baskets. We definitely have to make the extra pass.”

In its three games so far this season, Arizona have also shot three-pointers at a high level on the offensive end. Currently, the Wildcats are shooting 39% from beyond the arc which is No. 63 in the country.

On the other end, WSU has defended against three-pointers well, limiting opponents to 26% shooting from deep. Teams have had more success inside the arc against the Shockers, shooting close to 50%.

WSU is set to have one of its better perimeter defenders back on Friday in the form of Tyson Etienne. Etienne missed Tuesday’s game with an illness but returned to practice on Wednesday.

Another area that Arizona has excelled this season is on the offensive glass. The Wildcats are No. 36 in offensive rebounding at a 38.1% rate this year, according to KenPom.

“In order for us to be an elite basketball team, we need to get two or three guys that average five-or-more rebounds, and Morris Udeze is one of those guys that can get a double-double on any given night,” Brown said. “The focus this year for him is to be a better rebounder and be more skilled. We’ve got to get him to that offensive glass.”