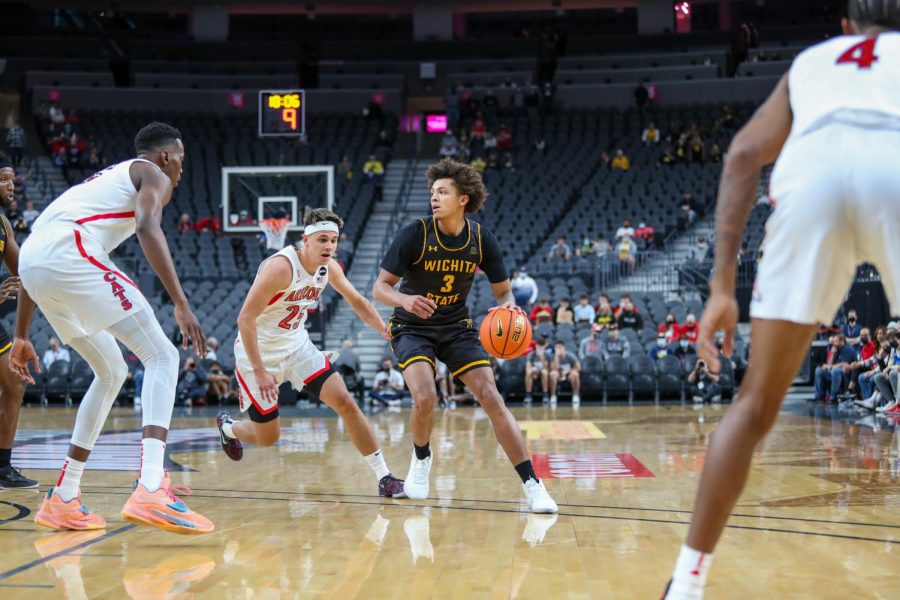 Craig Porter Jr. looks to pass during the game against Arizona on Nov. 19 inside the T-Mobile Arena.

Wichita State erased a 16-point second half deficit, forcing overtime but ultimately fell to Arizona, 82-78, on Friday in the Roman Main Event.

Sophomore guard Tyson Etienne led the comeback bid, scoring 24 of his 27 points after halftime on 27 shot attempts. Etienne also connected on a contested three-pointer with 16 seconds left in regulation to force overtime.

“The Shockers, we’re not going to fold,” Etienne said. “We’re going to be one of the greatest teams in college basketball, I firmly believe that. I know the heart that my guys got in that locker room. I know my coaching staff. We’re going to learn from this and we’re going to be great.”

“We missed 12 free throws and lost the game by four points,” Etienne said. “If we make eight of those 12, then we win by four. I missed four of eight. I never shoot 50% from the free throw line. I can have 27 points, but I’m disappointed because I know my team needed those four free throws.”

By the time the game got to the overtime period, both of WSU’s centers – Kenny Pohto and Morris Udeze – had fouled out, forcing the Shockers to play smaller. The Wildcats took advantage of the size mismatch, jumping out to a nine-point lead in the extra period before hanging on for the four-point victory.

There was a wide discrepancy in fouls between the two teams, with Arizona shooting 42 free throws in comparison to WSU’s 24. The Shockers were also called for 10 more fouls than the Wildcats.

“It wasn’t just the fact that they were shooting free throws,” head coach Isaac Brown said. “I get it if a team is beating you off the dribble and you’re fouling, but we got called for 15 check-out fouls. I’ve been coaching for 25 years and I’ve never seen that. We weren’t allowed to box out. We put them in the bonus early and we had a lot of guys on the bench. We couldn’t check out. We weren’t allowed to check out.”

Even in defeat, the Shockers remained positive about the game and moving forward with this season. Brown said that the fight WSU showed in the second half made him proud.

“Those kids got heart, man,” Brown said. “They kept battling. I’ve got good leadership on the bench. We were down (16) and nobody pointed fingers. They just kept battling. We knew we had to defend, rebound, play with toughness and take good shots to get back in the game and the older guys really helped get us back in the game. I’m proud of them.”

WSU shot a season-low 33.8% from the field, while also taking 39 three-pointers, which tied a 24-year old team record. The Shockers combatted their offensive woes on the offensive glass, tallying 20 offensive rebounds.

Three Shocker players finished in double figures, with point guards Craig Porter (11 points) and Qua Grant (13 points), each reaching that benchmark. Porter’s 11 points were the most he’s ever scored in a Shocker uniform.

WSU will play in the third place game against UNLV on Sunday at 11 p.m. The game will also be broadcast on ESPN2.