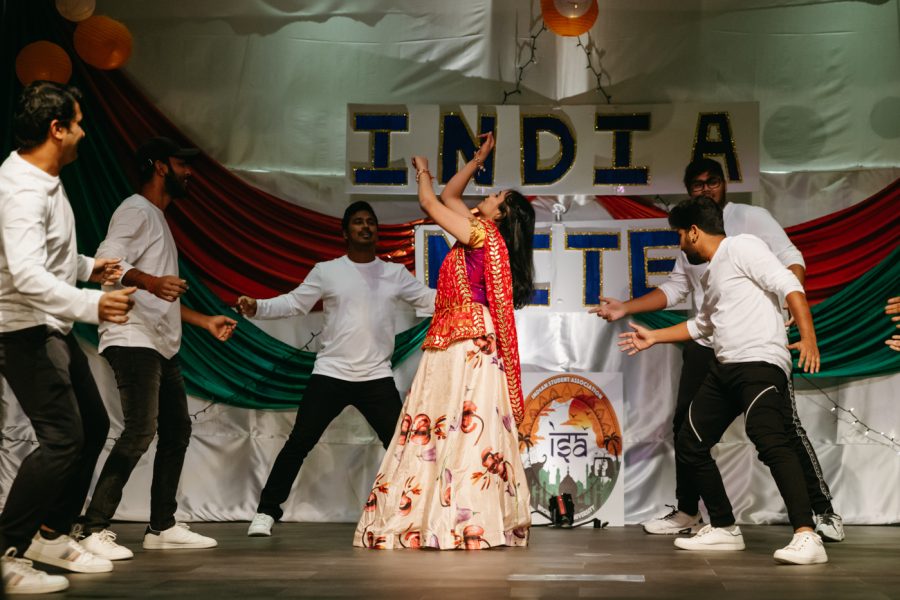 Priyanka Thakur of ISA performs during India Nite on Saturday Nov. 20. The event was hosted by the Wichita State Indian Student Association at the Eugene M. Hughes Metropolitan Complex.

On Saturday Nov. 20, the Indian Student Association at Wichita State brought India to Wichita with a vibrant and culture packed event hosted at the Eugene M. Hughes Metropolitan Complex.

The event started at 6:30 with Indian cuisine such as dal, chicken 65, chicken curry, vegetable curry and finished off with the dessert gulab. The food came all the way from Dallas.

D V Suresh Koppisetty, the president of the Indian Student Association, talked about how because of the pandemic there weren’t cultural events happening on campus and the mission for this event was to bring the community together and show the diverse culture. The event planning started over 2 months ago to prepare for the night.

He said it took a lot of patience and time, but he had a team behind him who helped make it happen.

“We wanted to celebrate with the fellow community,” Koppiestty said. “The special thing is we wanted to invite all the people, not only Indian community.”

Professor Perlekar Tamtam, the faculty advisor for the organization, graduated from WSU in 2012 with his PHD and is now a professor in the college of engineering. When he was a student he served as the President of ISA (Indian Student Association). The ISA is one of the biggest associations at Wichita State.

He said around this time, Indian culture celebrates Diwali, which is one of the biggest festivals in India. They wanted this event to represent that festival and show it to the students here.

The event brought in numerous people of diverse backgrounds. Student Chayston Simmons came to the event as part of the performance facilities to work sound and light. He was glad to be at the event and intrigued to see how it all goes.

Lisa Spreepalle, a computer science major at WSU, said she came to the event because her and her friends wanted to dress up and because of the limited outings with COVID-19. Because of COVID they “didn’t have a chance to connect to the university, especially our culture.” She was looking forward to the dinner and after that watching her friends perform on stage.

Kashyap Patel said it’s important for these kinds of events to be hosted because he’s away from his home country, so he’s not always witnessing his culture. He was looking forward to the performances later on because his roommate was performing a song.

Mulu Bannister, a major in management and information systems, attended the event to experience and to expand her knowledge of Indian culture. She was looking forward to the food, clothes and the performances.

“It’s really cool WSU has events like this to teach other people about other cultures,” she said.

After dinner, the crowd headed into the theater where the performances began. There was song and dance, all performed confidently and represented the vibrant and fun culture of India. There were upbeat group dances, beautiful solo songs and also group combinations that created an energetic environment.

The crowd cheered and joined in on the fun and the atmosphere was filled with excitement. Deans, professors, cricket players and volleyball winners were awarded and recognized in between sets.