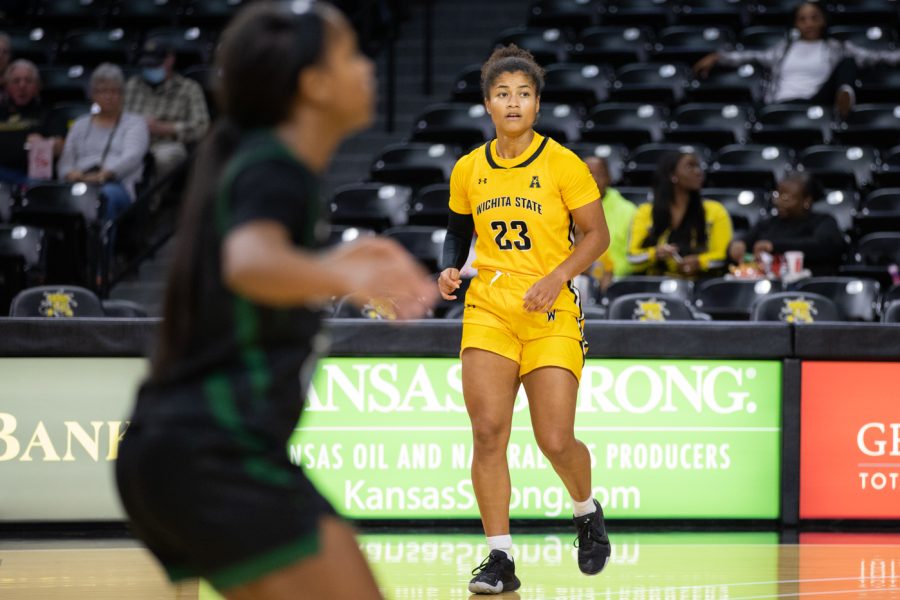 Seraphine Bastin looks towards the sideline during the game against Chicago State on Nov. 9 inside Charles Koch Arena.

“It was important that we came out of the locker room and had good focus,” head coach Keitha Adams said

WSU battled it out during the first quarter ending with a 17-17 tie. During the second quarter of the game, junior guard Seraphine Bastin gave the early lead to the Shockers.

“It’s fun to pressure because when we put pressure on the ball they start turning the ball over and we get easy buckets,” senior forward Asia Strong said.

Junior guard Carla Bremaud scored a last second three-pointer to close up the half 43-29.

“I thought our first half, our offense transition game was really good today. We got out and ran the floor and had some good fast break opportunities, and had some steels,” Adams said.

To open up the third quarter of the game senior guard Mariah McCully scored a 3-pointer to help Shockers advance in their lead.

The Shockers largest lead of the night came from the end of the third quarter with 28 points.

Freshman forward Jane Asinde earned her first start of her career as a Shocker against Praire View A&M. She  finished with a double-double by scoring 17 points and 11 rebounds making it a team high on the night.

The Shockers came home to Koch Arena from a 87-55 loss in Northern Iowa.

“They didn’t have to say anything, the score of the game, it set me back and made me take a look,” senior guard Mariah McCully said. “I realized I had to be more aggressive and I was settling a lot.”

The Shockers were able to see that a loss is a loss.

“Whether you win or lose you’ve got to learn from all of your games,” Adams said. “We have watched film on Northern Iowa and we had to turn the page and bounce back,” Adams said.

Wichita State bounced back during the game against Prairie View however they will be going back into the gym and getting back to it.

“I like that we are running and I like the speed that we are playing at. I think we have to keep practicing and finishing,” Adams said.

The Shockers plan on working on their defense for their upcoming game on Friday.

“It’s all about us hanging our heads on defense. Defense is what really has to set the tone for us and that’s where it all starts for us,” Adams said.

Wichita State will tip-off on Friday against Alcorn State at 3:30 p.m. at home.