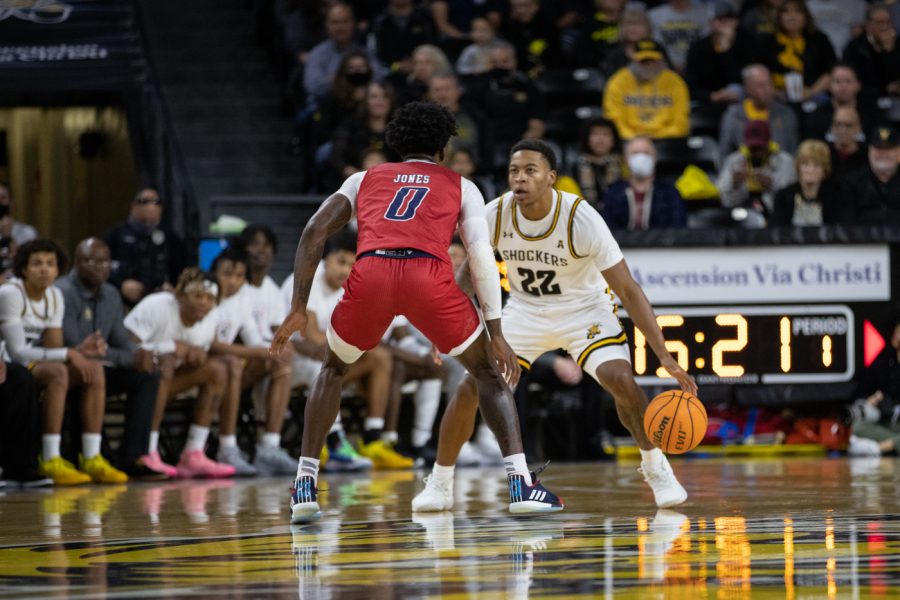 Junior Qua Grant blocks the ball against South Alabama at the Charles Koch Arena on Nov. 13.

The Wichita State men’s basketball team is set for its first road test of the season against the University of Missouri on Friday in Columbia, Missouri. The Shockers suffered a close loss inside Charles Koch early on last season against the Tigers.

Head Coach Issaac Brown said his team will have a huge challenge playing on the road against an SEC team.

“I’ll bring that to the table and let the guys know what these road games mean against these power five schools and it will be good to get a win,” head coach Issaac Brown said.  “Missouri is a well coached team. They’re a small team. They’re not nearly as big as Arizona so we got to be able to guard the bounce one through five.”

Brown said his team needs to take away improvements on the court that can be made from the Roman Main Event in Los Vegas last weekend.

“Going to play Missouri and Oklahoma State you gotta be able to rebound and you definitely gotta execute on offense, and take good shots,” Brown said “We got to put together a good 40 minutes. We’ve been playing you know 20 minutes a game, 15 minutes a game.

Brown graded his team with a B based on their performances against Arizona State and UNLV last weekend.

Brown said what helped his team play in the overtime game against Arizona and a win against UNLV was really just putting up a fight.

“Those guys got no quit in them,” Brown said “We got down 15 points I think against Arizona. We clawed our way back into the game.”

Sophomore guard Tyson Etienne has proved time and time again this season that he can step up and hit three-pointers or knock down baskets for the Shockers.

In Las Vegas, Etienne scored a total of 55 points between the Shockers two games. Etienne has been in situations this season where he has had the opportunity to hit deep threes with not a whole lot of time left on the clock.

Brown said he still has confidence in Etienne  heading into the Shockers matchup with Mizzou and Oklahoma State that he can still knock down those shots.

“He’s a kid that thinks he can make every shot so putting the ball in his hand late is really good. He has a green light to take wide open shots. He makes those shots a little deeper than most people but he makes those shots in practice, he’s got a lot of confidence, and now the defense is starting to play further out which helps him make a drive to the basket because he has more room to get to the rim.”

Issac Brown said that his team needs to take more advantage of senior forward Morris Udeze in order to be successful against Mizzou and Oklahoma State.

Udeze is currently only averaging 46.7 percent from the field and averaging 7.0 points a game. The junior center has been double teamed in multiple games which causes turnovers.

“We gotta start getting him some easy baskets,” Brown said “Right now teams are playing with a bigger guy. We gotta be able to penetrate and kick it to him for an easy dunk or an easy layup. Maybe a 15-foot jump shot.”

The Shockers matchup with the Tigers will start at 8 p.m. and air on the SEC Network.