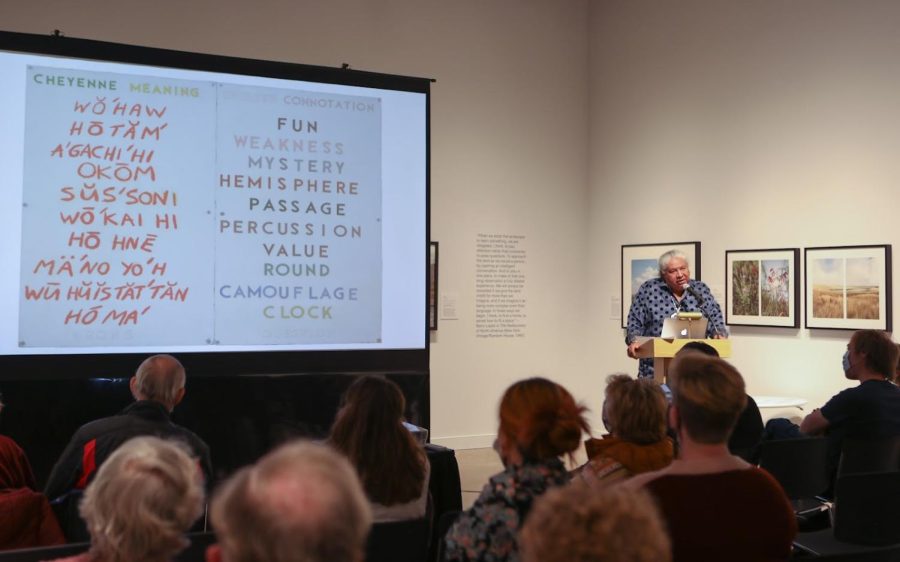 Hock E Aye VI Edgar Heap of Birds talks about how his art and how it serves to work for social justice at the Ulrich Museum on Tuesday night.

The Ulrich Museum of Art continued their ‘Voices from the Vault’ series this month with artist Hock E Aye VI Edgar Heap of Birds, an Oklahoma based artist who focuses on social justice and the freedom to live within the tribal circle as an expressive individual.

Heap of Birds talked to the audience showcasing his work from many areas and universities early in his career. He also talks about the struggles he faced in art school in Philadelphia, how there were no teachers of color and was in the angle of formalism but it made his art stronger.

“It was a tough go through Philadelphia,” Heap of Birds said. “You know, a very important art school but very much in the angle of formalism. So we didn’t have any professors of color at all at my art school.

“So I struggled, but it kind of gave me the impotence to be kind of in your face with my messages because people try to deflect the native history that I was trying to articulate,” Heap of Birds said. “And I guess I still do that, I’m still right in your face with a lot of things.”

He also discusses a piece called “Fort Marion Lizards” he had done. The piece muse is derived from the Washita Massacre, with the list of names from a list that Captain Pratt had written himself when serving as a POW in Florida after being captured with about 30 other leaders.

The painting is an eight-foot by eight-foot list that shows many names, with Heap of Birds on the top as the first name.

Heap of Birds explains that the tactic by the American government was to keep the people in line while they kept their leaders in prison. Some leaders made it back and some died in Florida, but they still struggle to regain their composure and leadership from that day.

His art took him around the world on scholarships, to places like Switzerland and the Netherlands, but in the end he made it back home to Oklahoma where he lived on his Arapaho grandmother’s land for about ten years and hunted and hiked every day.

“It was just out of necessity or boredom or whatever. But I hunted every day and hiked every day,” Heap of Birds said. “I had no money, had no water to turn on, had no electricity to turn on, I had no road to drive on, an outhouse down the hill.

“But look back, romantically you know, but it was a very wonderful time, to learn from the earth. And that’s where indignity begins, in the earth, it’s not in the people,” Heap of Birds said. “So if you’re indigenous, and you want to really reflect on what that is, you need to love a place, you need to find a place. So that place in Oklahoma is my place.”

Heap of Birds brought his presentation to an end with a video he had made showing the land and how it has given inspiration and taught him much in life.