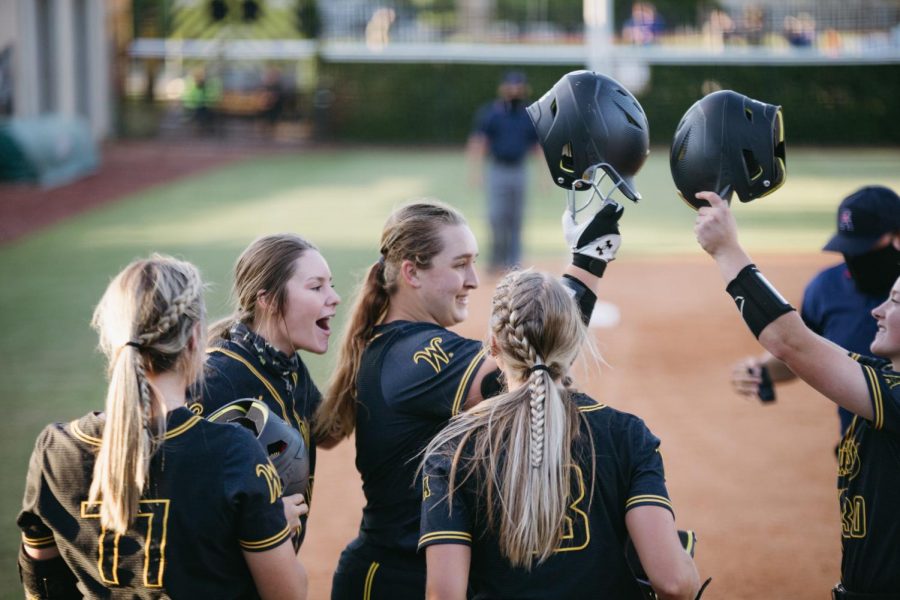 Wichita State sophomore Lauren Mills celebrates at home base during the game against Tulsa on May 14.

Collegiate softball players from across the country will now have the chance to spend their summers in Kansas, with the formation of the Sunflower Summer Collegiate Softball League on Monday.

The league will launch its inaugural season in summer 2022, becoming just the second summer collegiate softball league across the country.

“We really want to try to encourage girls to sign up because we’ve heard from some coaches that some of their players are waiting to see,” league commissioner Casey Walkup said. “And what we want to do is encourage those girls to take a leap of faith with us and be the pioneers.”

Walkup estimates around 100 collegiate softball players will have the opportunity to continue playing in the summer, with interest in playing games in Hutchinson, Valley Center, Derby, El Dorado, Goddard, and Wichita. All teams will also play in a weekly showcase game at Wilkins Stadium on Wichita State’s campus.

WSU softball head coach Kristi Bredbenner said that having these opportunities will be crucial for players getting at bats during the summertime.

“I think the biggest thing that our kids can take away from it is those girls that maybe don’t get the at bats, they don’t get the playing time that they’re looking for throughout the season, but they want to get themselves ready for that next year,” Bredbenner said. “This is a perfect opportunity for them to get those reps and get to get that time.”

During the inaugural season, there will be six teams in the league, with the teams consisting of 16 players. The SSL will operate for six weeks, from about June 17 through July 17. The league plans for a mixture of single-game slates and doubleheaders throughout the season.

“Working together as a league, and not just individual teams, allows us to provide a cost-effective opportunity for college softball players to compete in summer softball,” Walkup said.

The SSL will become the second summer softball collegiate league, joining the Florida Gulf Coast League. The Shockers have sent many players to compete in Florida over previous offseasons, but the hope is to give the players the same type of opportunities.

“We want to provide women and student athletes with opportunities around the country, to give them an opportunity to summer collegiate softball,” Walkup said. “We feel we can do everything they’re doing and do it better here in Wichita.”

Three Shocker softball players – Bailey Urban, Courtney Compton and Lauren Mills – have already been announced as players for the league, with more expected in the future.

The player fees are expected to be $1,200 with a $500 deposit due by Feb. 1 to reserve a roster spot. An amount of $200 will be returned to the player if they are in good standing at the end of the league.