Shockers return to Koch Arena with matchup against Norfolk State 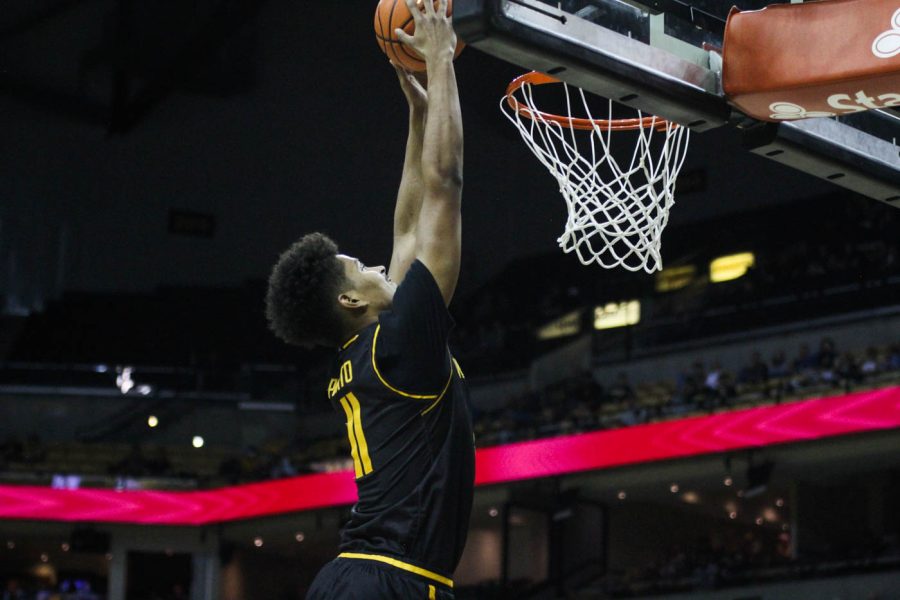 Kenny Pohto dunks during the game against Missouri on Nov. 26 inside Mizzou Arena.

Throughout this season, Head Coach Isaac Brown said teams the Shockers have played early on like South Alabama and Jacksonville State are teams that are capable of finishing at the top of their conference. He said against Norfolk State, it will be no different.

After coming off of two back to back road games, the Shockers are back at Charles Koch Arena for the first time in 25 days. Brown said it will be important to close out the non-conference slate at home, after falling to Kansas State last Sunday.

“Any time you can play at Koch Arena, it’s a different atmosphere,” Brown said. “We’ve got a sixth man here with our fans’ support, and this is the gym we play in every day, so playing back in Koch Arena is definitely exciting.”

The Spartans return junior guard Joe Bryant Jr. to this season’s roster after being a full time starter last season and was named third team All-MEAC. Bryant is currently averaging a team-high 14.5 points a game.

Top performers for Norfolk State also include junior forward Kris Bankston who is averaging 11.6 points on 76% shooting and a team-high 6.6 rebounds. Sophomore guard Chrstian Ings is averaging 10.6 points per game on 43.8% shooting from downtown.

Overall, Norfolk State is 9-2 this season. Their only losses this season were against Xavier earlier this season and Hampton last weekend.

Tip-off is scheduled for 6 p.m. on Sunday, with the game also broadcast on ESPN+.