Shockers use defensive efforts to push past Norfolk State 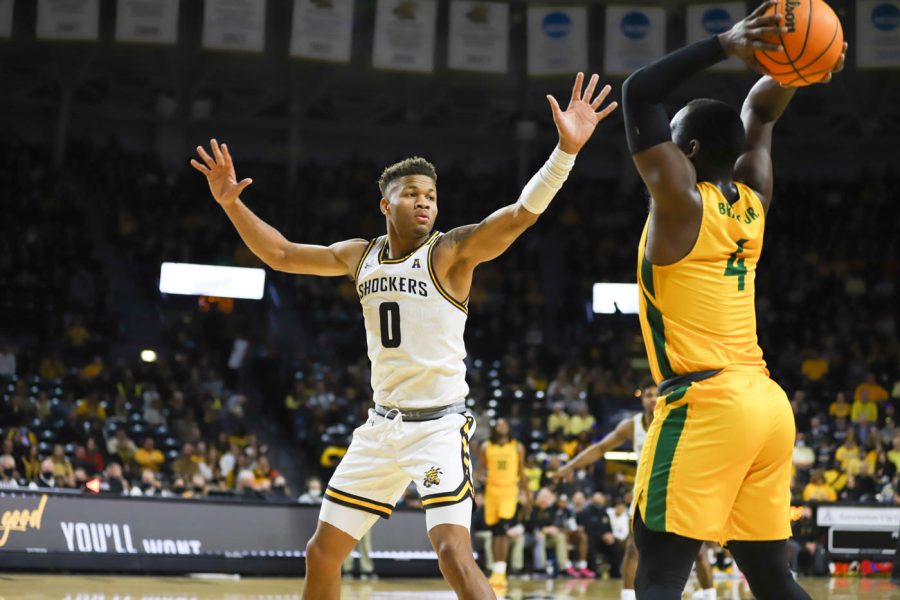 Junior Dexter Dennis defends the pass during the game against Norfolk State on Dec. 11 inside Charles Koch Arena.

After a deflating loss last Sunday at the hands of in-state rival Kansas State, the Wichita State men’s basketball team responded in a big way on Saturday, defeating Norfolk State 71-58.

WSU improved to 7-2 on the season with the win as they look to finish the non-conference slate strong.

The Shockers started out hot by going on a 14-0 run. However, they went the next ten minutes without scoring any points against Norfolk State’s zone. During that 10 minute stretch, the Shockers showed signs of what had been plaguing their early-season offensive struggles.

But after some halftime adjustments from head coach Isaac Brown, the Shocker offense had some of its best ball movement of the season, evident by their 18 assists.

The Shocker offense got rolling in the second half, after Brown inserted Ricky Council IV into the middle of the zone defense and created plays off of that. Seven of Council’s nine points came in the second half, while the freshman guard also dished out a career-high six assists.

“At halftime, we drew up a play called single and we put a guard in the middle of that play and it was Ricky and I thought he did a great job of getting the ball, driving in for layups, having two people guard him and kicking it to Morris, or driving it and kicking it to our shooters,” Brown said.

After Craig Porter Jr. went down with a knee injury last Sunday against Kansas State, Brown said he was worried about Porter missing some serious time. But Porter returned to the starting lineup on Saturday and made an impact despite not registering a single point.

“He does all of that,” Brown said. “He gives us energy, he gets other guys the ball, he does a good job of rebounding, he chases guys down and blocks shots and he was a great influence for us on both ends of the basketball court.”

Junior forward Morris Udeze reached double figure scoring for the fourth straight game, tallying 16 points to go along with seven rebounds. Udeze is averaging 15.8 points per game over the past four games, after only reaching double figures once in the first five games.

“Mo is really scoring it on the block,” Brown said. “The guards are getting him the ball and he’s doing a good job of trying to stay out of foul trouble and making free throws.”

Brown and his team said earlier this season that they need to play a “more complete” basketball game. Sophomore guard Tyson Etienne said he and his team took a step towards that direction against Norfolk State.

“I’m attempting for all of us to come out with a killer instinct but sustain it,” Etienne said.  “Tonight we kind of let off the gears but it’s something you have to find.”

The Shockers will be back in action on Tuesday as they take on Alcorn State inside Charles Koch Arena at 7 p.m. The game can also be seen on ESPN+.