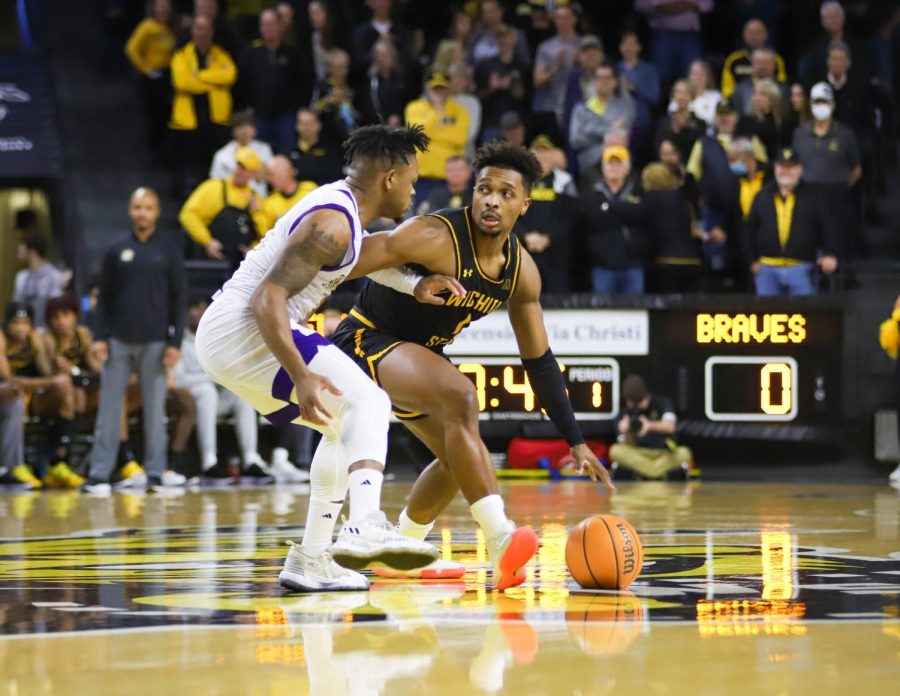 Sophomore Tyson Etienne looks to drive during the game against Alcorn State on Dec. 14 inside Charles Koch Arena.

Wichita State secured another dominating victory on Tuesday, defeating Alcorn State 82-63 inside Charles Koch Arena. The Shockers handled business against the Braves but are yet to play a full 40 minutes this season.

WSU controlled a double-digit lead for most of the game, but Alcorn State managed to cut the lead down to seven points early on in the second half. Junior point guard Craig Porter Jr. said it was primarily due to lack of concentration.

“It’s more of an us thing as players, we’ve got to stay focused,” Porter said. “Once we get that lead, we start to get a little childish and we tend to take our foot off the gas pedal. That’s one thing we’re definitely going to correct. Once we get that full 40 minutes going, it’s going to be real scary for people.”

WSU’s ball movement was improved, with the Shockers tallying 20 assists on 31 made baskets. The transition offense has also been a weakness early on, but WSU outscored the Braves 18-6 in fast break points. Junior Morris Udeze said their recent success on offense is a result of being more unselfish.

“It’s good to have us watch film and correct those mistakes,” Udeze said. “Now we’re just getting down the lane and making passes for others, trying to make plays for others.”

Udeze continued his great form of late, reaching double figures for the fifth straight game, after only reaching that benchmark once through the first five games. Udeze’s ability to take care of the basketball has been key during this recent stretch. In the past three games, the junior forward has had three turnovers after turning it over 20 times in the first six games.

“I just slowed down,” Udeze said. “Me and the coaching staff watched film the other day and I was in a rush, kind of excited for the season, trying to hoop out there. I just had a lot of forced turnovers so I just calmed down and let the game come to me.”

Another positive from the 20-point victory was the performance of freshman center Kenny Pohto. In 19 minutes played, Pohto scored a career-high 14 points off the bench, while going 2-4 from deep. Pohto made his presence felt on the offensive glass as well, recording five offensive rebounds.

“He has good hands,” Udeze said of Pohto. “I go against him every day in practice and he’s strong for a freshman. Bigs kind of take some time to progress at the college level, but he came in, got a great opportunity and he’s taken advantage of that.”

“I’m the tallest guy on the court, so I just try to do what I’m supposed to do and get the rebounds over the little boys,” Pohto said. “The scout was to crash the boards, so that’s what I did.”

The Shockers will wrap the non-conference schedule with a matchup against North Texas on Saturday at 3 p.m. The game will be broadcast on ESPN+.

“The last time we played a Conference USA team in the NCAA Tournament we lost to Marshall,” Brown said. “We’ve got to be ready to go. North Texas won an NCAA Tournament game last year. We’ve got to have 40 minutes in order to win the basketball game.”