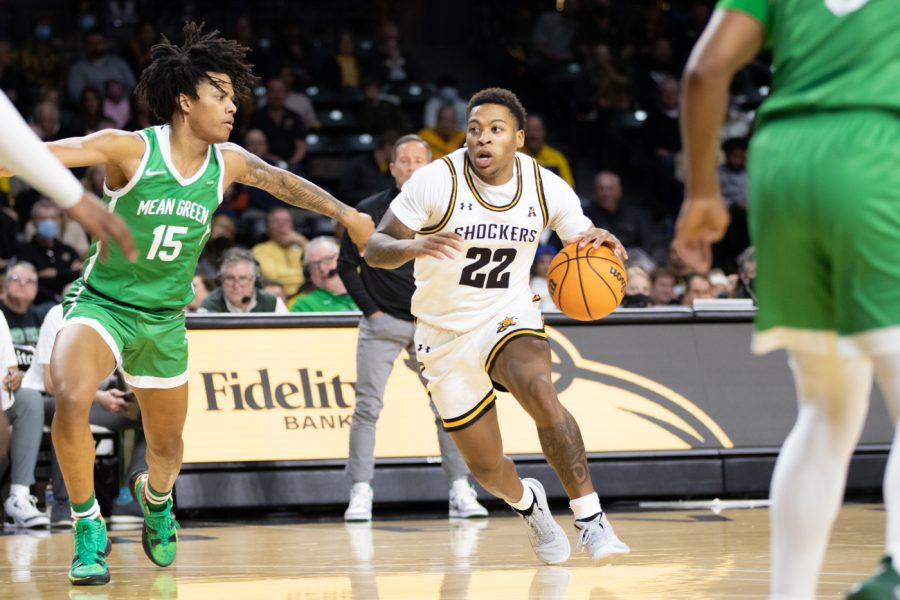 Junior Qua Grant drives the ball down the court against North Texas on Dec. 18.

The last non-conference game of the regular season schedule for the Wichita State basketball team will be a chance for them to earn a win heading into conference play.

The Shockers will play Prairie View A&M at home on Wednesday, Dec 22.  before they head to North Carolina next week to take on Eastern Carolina University in conference play.

Head Coach Isaac Brown said their last non conference game needs “to change” from how they have been playing. Brown had a conversation with his players after their North Texas in order to get ready for their upcoming game and the rest of their schedule.

“If you’re not making shots regardless, if you are a guy that’s been here for three or four years you have to come out,” Brown said. “You gotta make shots. You cannot turn it over so that’s what the conversation was about.”

Brown said his team needs to play great against Prairie View (0-9) just like any other team on their schedule. Brown said that starts with an improved offensive attack.

“They force a lot of turnovers, and that’s one thing that we haven’t been doing a great job of is taking care of the basketball, but you definitely want to clean up all of your mistakes before you go into conference play,” Brown said.

Brown said practice has been good, after their loss last week but he said the game tomorrow night will actually prove how great practice really was.

“The guys respond in practice yeah Rah! Rah! Rah! We get hyped. We make shots. we don’t turn it over. But I need to see that in a game,” Brown said.

Qua Grant at the helm

Against North Texas, junior guard Craig Porter Jr. went down with an ankle injury, which leaves his injury status questionable for tomorrow night’s matchup. Therefore, Brown said he is most likely going with junior guard Qua Grant as the starting point guard against Prairie View.

The Shocker offense has struggled during stretches when Porter has been hurt for WSU. Against the Mean Green, WSU didn’t score for 13 minutes with Porter out, which proved pivotal in the loss last Saturday.

Brown said in order for Grant to be successful tomorrow night he needs to be the leader on the court and run the offense. Grant has been a key player for the Shockers off the bench so far this season.

“Bring those guys together because at some point during the game there’s going to be adversity,” Brown said. “You got to be a head coach on the floor. This is your opportunity. All the kids on the basketball team talk about getting more minutes and now you got that opportunity. It’s time to step up.”

The Shockers will tip-off against Prairie View A&M at 6 pm on ESPN+.