With eight healthy scholarship players, Wichita State reached the century mark for the first time all season against Prairie View A&M on Wednesday 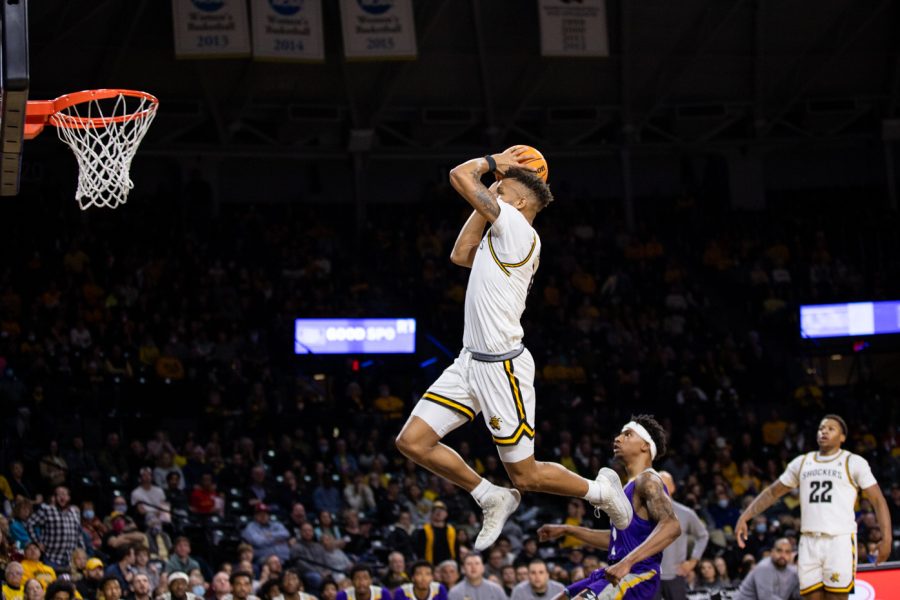 After stealing the ball from PVAMU, junior Dexter Dennis goes in for a dunk. WSU defeated PVAMU, 102-66.

After a disappointing loss to North Texas last Saturday, Wichita State needed a game to hang their hats on heading into conference play. A Shocker offensive outburst did just the trick, defeating Prairie View A&M 102-66 on Wednesday.

The Shockers did so playing without injured starters Joe Pleasant (hamstring) and Craig Porter Jr. (ankle), securing its first 100-point performance since scoring 112 points against Tennessee-Martin just over two years ago (Nov. 16, 2019).

“I think tonight, they had a lot of energy in the locker room before the game,” head coach Isaac Brown said. “They came out, all they talked about was responding the right way to a tough week of practice. I’ve been on them hard, we’ve been watching a lot of film, having a lot of individual meetings, and those guys responded the right way.”

WSU showcased an improved offensive performance, with six players reaching double figures. Sophomore Tyson Etienne led the way with an efficient 20 points on 6-11 shooting to go along with five assists and four steals.

“Regardless of who you play the ball’s still got to go through the basket but I felt that we played with a high basketball IQ,” Brown said. “We were pushing the ball in transition, we had great spacing, guys were driving to get their teammates a shot and made wide open shots.”

Qua Grant made his second start in a Shocker uniform, filling in for the injured Craig Porter. Grant rebounded from a scoreless outing against North Texas with six points, eight assists and four steals.

“It was a game where we knew they would come and bring intensity because they had nothing to lose,” Grant said. “Just to see the assists and all the jumpers go in, it just felt good.”

Freshman guard Chaunce Jenkins also showed his potential in Porter’s absence, scoring a career-high 11 points in 25 minutes played. Jenkins did so after missing the North Texas game due to a knee injury.

“It felt good,” Jenkins said. “You work hard everyday and it just felt good to see it pay off.”

WSU will now head into conference play, after wrapping up the non-conference slate. Despite the two disappointing losses at home early, Brown is confident in the Shockers’ chances to defend their regular season title.

The players are also carrying over that same level of confidence and belief in what this team can accomplish.

“Once the pieces finally come together, this team is going to be unbelievable,” junior Clarence Jackson said. “We’re playing for each other, so we know we’re a family. It’s only going to get better.”

The Shockers will travel to Greenville, North Carolina to take on the East Carolina Pirates in the AAC opener on Wednesday at 6 p.m. The game will also be broadcast on ESPN+.