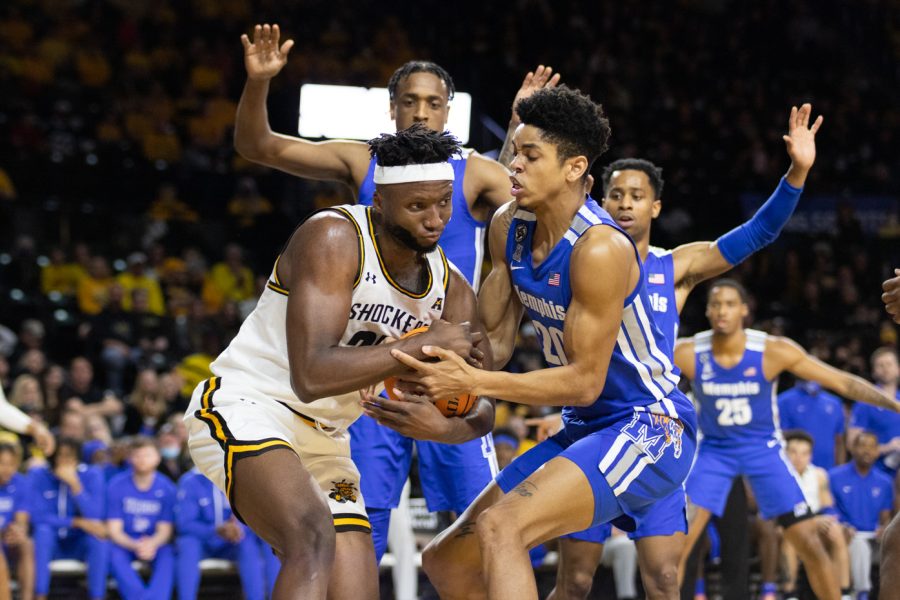 After rebounding, junior Morris Udeze holds on to keep the ball from Memphis.

The most lopsided loss at Charles Koch Arena in 18 years was how the Wichita State men’s basketball team started off the New Year  after dropping their first conference game of the season to Memphis 82-64 on Saturday, Jan 1.

Head Coach Issac Brown said his team was unprepared against a preseason top-10 Memphis team coached by one of the NBA greats Penny Hardaway, as well as legendary coach Larry Brown.

“We didn’t come to play well, they were the better team,” Brown said. “I got confidence.” All we can do is battle back.”

The Shockers struggled on both the offensive and defensive side of the ball. Memphis shot 63.6% from the field and dominated the paint, outscoring the Shockers by 26 in the lane. WSU struggles on offense came from outside as they shot 20% from beyond the arc.

“When you go 7 for 33, it’s hard to win basketball games,” Brown said. “You’ve got to make shots.. If they’re going big, we’ve got to be able to spread the floor and make shots. I think their size and athleticism bothered our shooters.”

The Shockers offensive struggles have been a common theme early on this season but sophomore guard Tyson Etienne said defense held them back on Saturday.

“I credit the loss more on the defensive side. We had too many mental lapses. I know I had mental lapses. So it was a defensive thing that really lost us the game,” Etienne said. “Obviously we need to start shooting the ball better, which we will, but defense is something we’ve always hung our hat on and we didn’t do that today.”

Etienne, who finished with a team-high 17 points, said he has confidence in his team to still perform well in their conference for the rest of the season. He said it doesn’t really matter what kind of predictions everyone else might place on them.

The Shockers will play at Houston on Saturday, Jan. 8 and will tip-off at 11 a.m. The game will air on CBS.