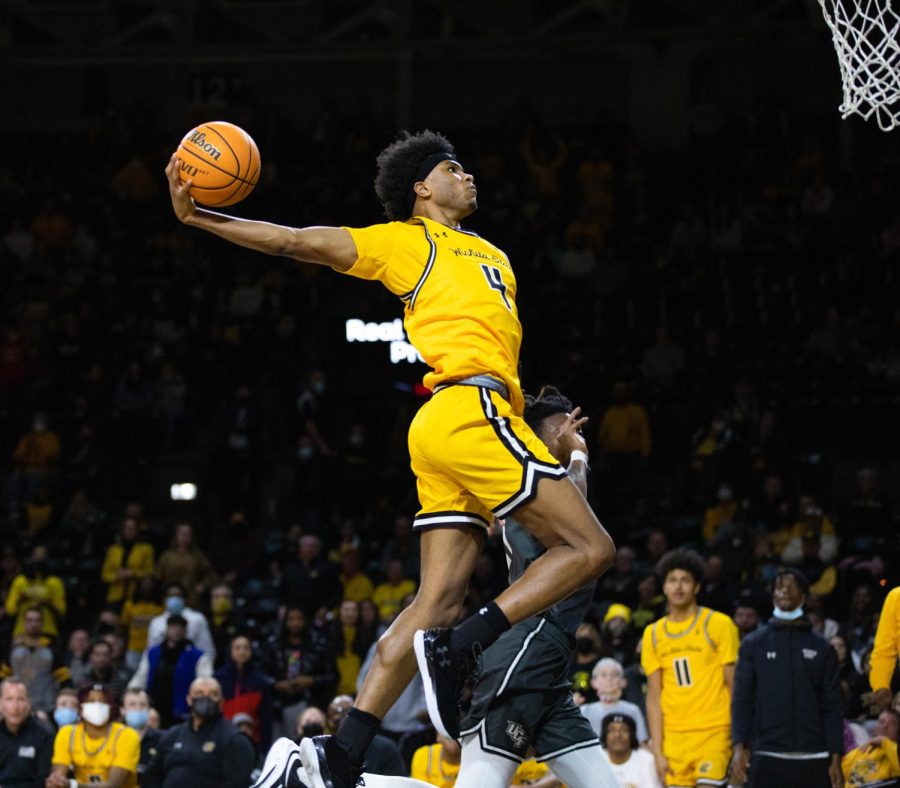 Freshman guard Ricky Council completes his first dunk of the night. Council led the Shockers in scoring with 31 points.

Wichita State was desperate for a win following an 0-4 start to conference play and needed a big-time performance to end their slow start. Freshman Ricky Council IV delivered just that in Wednesday’s victory over UCF.

“It just feels good to win,” Council said. “We’ve been talking about it, scoring 30 was just a part of it. I was just tired of losing so I just had to do what I had to do.”

Council’s historic performance at the free-throw stripe is due to his hard work put in over the summer. Last season, the freshman guard shot 65.8% on free-throws but that number is up to 81.2% through 17 games.

Council changed his routine over the summer and now takes two dribbles and shoots the free throw. The change has been effective, with Council shooting 85.7% to start conference play.

Council was aggressive in attacking the rim, especially in the second half. The Durham, North Carolina native scored 22 of his 31 points after halftime, including two crucial three-pointers to help fend off the Knights.

“I thought he attacked the press, got some easy layups, he drove it, got fouled, got to the free throw line,” head coach Isaac Brown said. “When Morris Udeze got doubled inside, it freed him up to take some wide open jump shots.”

From an outside perspective, UCF head coach Johnny Dawkins said he’s been impressed with Council’s development since he last saw him play last season. Council was held scoreless in both matchups against the Knights last season, while missing all eight shot attempts.

“He’s an aggressive player and he attacked all the time, so he put himself in a position to be fouled because of how hard he plays,” UCF coach Johnny Dawkins said. “It’s a compliment to him. He’s worked really hard on his game and I can see the improvements in his game from last year.”

Council and the Shockers will look to continue their winning ways on Saturday as they take on Tulane in a road matchup at 11 a.m. The game will also be broadcast on ESPN+.