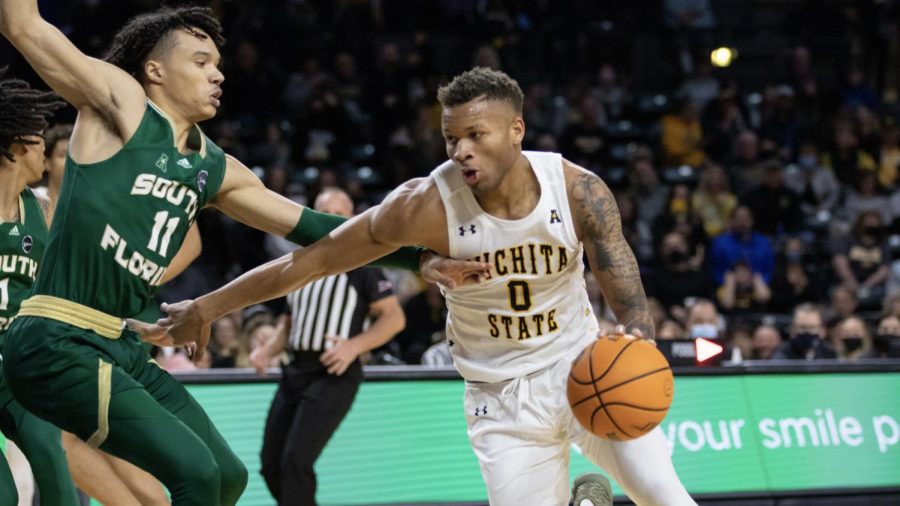 Time is running out for Wichita State.

The Shockers dropped their fourth AAC road game on Thursday, at the hands of Cincinnati, 85-76. WSU is now 4-7 in conference play and sits firmly in eighth place in the American. The Shockers’ seven conference losses are the most since the 2018-19 season.

The Bearcats shooting from deep proved to be pivotal in Thursday’s loss, going 11-19 (58%) from beyond the arc. Cincinnati entered the game as one of the worst three-point shooting teams in the conference, shooting 31.8% on triples.

“Our defensive intensity wasn’t there, I felt like for 40 minutes and we paid for it,” junior guard Dexter Dennis said. “They made a lot of threes tonight, they made a lot of big shots so credit goes to them.”

Cincinnati quickly opened up a 21 point lead before the 10 minute mark of the first half. Head Coach Isaac Brown proceeded to call a timeout and the Shockers closed out the half on a 24-10 run and trailed by seven at the half.

WSU was unable to cut further into that second half deficit, as the Bearcats held a double-digit lead for much of the final 20 minutes. Freshman guard Ricky Council IV was one of the few bright spots in the nine point loss, scoring a team-high 17 points off the bench. 15 of his 17 points came after halftime.

“It’s never too late,” Brown said. “Overall, we’ve been a good defensive team but we’ve struggled on offense for the most part. Tonight we had a defensive breakdown, we didn’t guard the basketball well and they were able to get out in transition and get some baskets. It’s definitely something you can fix.”

Sophomore guard Tyson Etienne was hobbled in the second half, due to an ankle injury. Etienne was seen getting his ankle taped up and continued to play through the injury. He finished with 14 points on 6-for-14 shooting.

Brown said that he didn’t have an update on Etienne after the game and will hear about the diagnosis tomorrow.

“I hope he’s good,” Brown said. “The first time he hobbled, I asked him ‘are you okay?’ He was begging to get back in the game so I put him back in. He started hobbling again so we took him out. I’m just waiting to hear from (athletic trainer) Todd (Fagan), he does a good job at getting those goes well. We’ll see tomorrow.”

The Shockers will continue their daunting stretch this weekend as they host first place Houston on Sunday. After that, they’ll be on the road to take on Memphis.

Even with the team’s chances of receiving a first round bye and a top-five finish in the AAC in doubt, WSU remains confident in turning the season around, just as they have all season long.

“I feel like we can do it,” Dennis said. “It’s going to take a little change though. It’s been done before but it’s definitely hard dropping these games. This is something this program isn’t used to, a lot of us aren’t used to losing this much. But it can still be turned around.

“We still have a little time left but it’s going to take a few of us or everybody on the squad to look in the mirror and just ask what could they have done better and what can each person be better for on this team.”