‘We can beat anybody:’ Baseball clinches double digit win in series finale 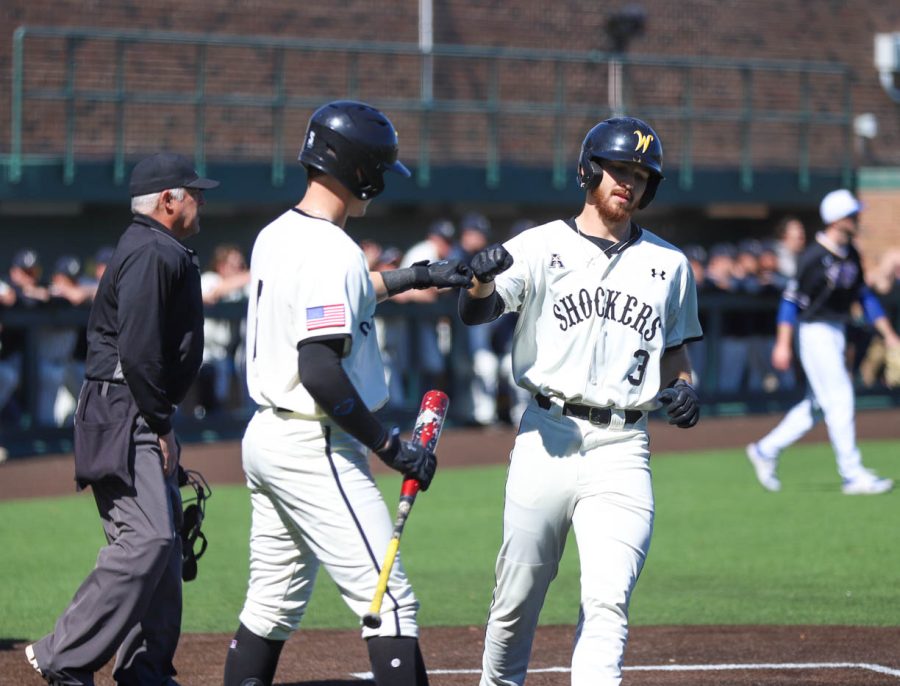 Sawyre Thornhill celebrates with Xavier Casserilla after scoring a run during WSU's game against South Dakota State on March 13 inside Eck Stadium.

The baseball program had a two run win and a two run loss. But it was the 19-7 win on Sunday that clinched the Shockers first home series this week.

“I told them yesterday we can lose to anybody,” Head Coach Eric Wedge said. “We can beat anybody depending on how we play collectively and it says that for a lot of teams but we’ve got a lot of new players and you know I’ve got some older players that are pressing a little bit.”

The Shockers started sophomore Jace Kaminska on the mound on Friday. Kaminska set a personal record with eight strikeouts in six innings.

Kaminska said he used his ability to use his offspeed early and throughout the game.

“That’s where I got in trouble early on and today I think that was kind of the difference maker,” Kaminska said.

The Shockers jumped out in the lead early in the bottom of the third inning. Jack Sigrist hit an RBI sacrifice fly, scoring Ross Cadena. The Shockers added on a run in the fourth and three in the sixth. South Dakota hit two homers in the seventh and ninth.

WSU relapsed in game two on Saturday with a 2-4 loss. Payton Tolle got the start on the mound for the Shockers and pitched 6.2 innings but ultimately took the loss.

On Sunday, the Shockers tied it up with the Jackrabbits in the bottom of the first. However, it was in the fourth that the Shockers blew the game wide open.

Brock Rodden, Chuck Ingram and Andrew Stewart all homered in the fourth. Stewart went 3-4 at the plate and had four RBI’s. He also had his first career  home run on Sunday.

Wedge said Stewart has always been a great player defensively, but offensively he’s worked really hard to get to where he’s at today.

“He’s been swinging the ball better lately,” Wedge said. “Not just today and ultimately when you talk about Andrew you talk about a guy that’s wanting to hit the ball in front of the outfielders and these couple of days he’s hitting the ball behind them so that says a lot for him he’s swinging.”

Up next, the Shockers will play another series at home starting on Friday, March 18 against New Mexico at 6 p.m.