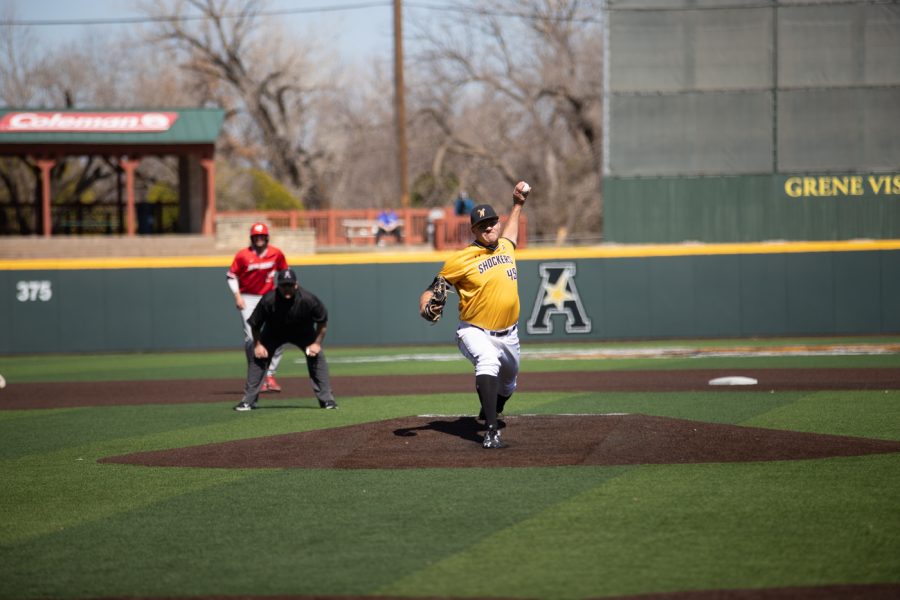 Payton Tolle throws a pitch during WSU's game against New Mexico on March 19 inside Eck Stadium.

Head Coach Eric Wedge said the Shockers didn’t quite put it altogether to seal a series win against New Mexico State at Eck Stadium this week.

On Friday, sophomore Jace Kaminska put together a solid performance on the mound. He had five strikeouts in five innings and allowed four runs on six hits. Sophomore Caden Favors finished it out for the Shockers by allowing zero runs in three innings on two hits.

However, the Shockers performance at the plate dwindled them to four runs with one in the second and three in the sixth. This led to a 4-0 final score and gave the Aggies a win in game one.

However, a strong hitting performance at the plate on Saturday caused the Shockers to play a close game with the Aggies. Ultimately, the Shockers lost 9-12. Sophomore Brock Rodden contributed well to the Shockers success offensively by going 3-5 at the plate.

“He’s probably been our most aggressive hitter,” Wedge said. “Him and (junior Sawyre) Thornhill) and you see the numbers. They go up there looking to hit the fastball. They are aggressive. They’re ready and they hit the ball hard.

Wedge said the Shockers hit well on Saturday despite a poor pitching performance from the bullpen. Freshman Payton Tolle started off for the Shockers and lasted three innings.

“Starters have been decent,” Wedge said “Bullpens have been sketchy. Offensively we’ve just had good days and bad days so it’s just making our bad better.”

The Shockers ended the week on a positive note with a 13-7 win against the Aggies on Sunday. Wedge said he felt like offensively and defensively, the Shockers didn’t quite put it all together still.

Sophomore Cameron Bye started on the mound for the Shockers and had four strikeouts. In 3.1 innings. He allowed zero runs and zero hits. Bye threw 70 pitches in his start with the Shockers. Wedge said Bye ultimately put his team in a winning position.

“He’s (Bye) not built up as a starter just yet so we had to get him out of there,” Wedge said. “Our bullpen, some guys were okay. Some guys weren’t.”

Despite WSU’s struggles on the mound, the Shockers had 13 hits on 13 runs and had 35 at bats. A key contributor to their offensive power today was sophomore Chuck Ingram. Ingram went 5-5 at the plate. He said early on in the series, he started noticing a lot of sliders from the Aggies pitching staff.

“I knew what was coming the first couple at-bats and just tried to stay back on the slider and then once I started getting the slider I started hitting more fastballs so that’s kind of what I was looking for,” Ingram said.

Up next, the Shockers will play the University of Oklahoma at home on Tuesday. The first pitch is scheduled for 6 p.m.