A final show to cap the year off 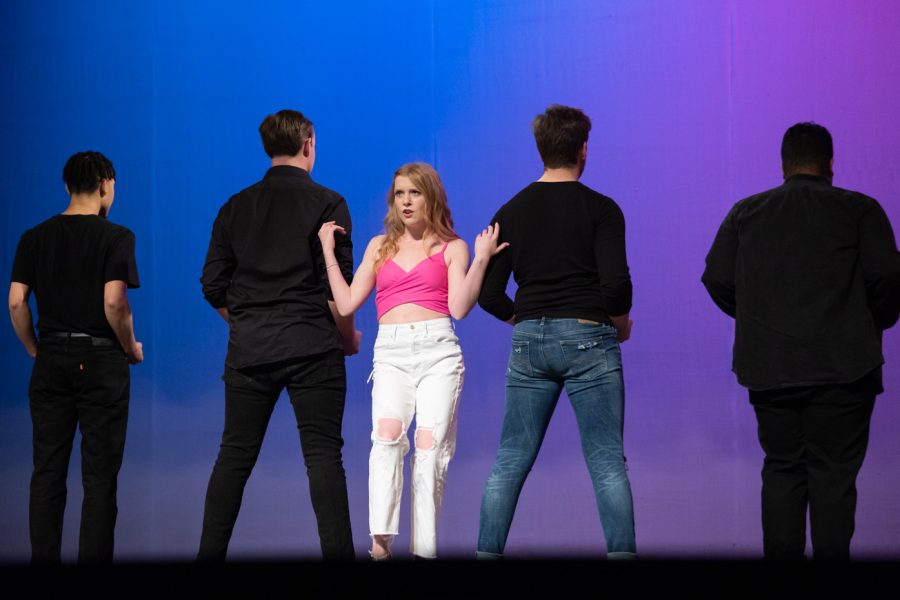 Playing the role of senior Regina George, Olivia Goodspeed sings “Someone Gets Hurt” from Mean Girls.

The Wichita State Musical Theatre Department gave seniors the opportunity to display their talent one last time before parting from the university.

On March 11, in Wilner Auditorium, the spring-graduating senior’s Capstone Performance was held and included pieces from various musicals and artists.

“A normal musical showcases a few people really well, but this one gives everybody an opportunity to really show off and that’s awesome to get to do,” senior Teagan Myers, who did her character study on Samantha Brown from the Mad Ones.

Seniors were given the opportunity to choose the character they wanted to study and perform as that character. Several said that the roles they chose had been on their list to play for years.

“My character study is from the Phantom of the Opera, and I feel very happy about the choice,” senior Chayston Simmons said, who studied the Phantom. “It’s a role I’ve looked at for years and years, but Phantom is a beast of a role, so I never felt like I could feasibly do it until now.”

When deciding their characters, some seniors said they picked characters that they could find themselves in.

“I picked John Larson from tick, tick…BOOM!” senior Ethan Harmon said. “It’s about [Larson’s] struggle being unsuccessful and turning 30. I can relate to that even as a 21-year-old, just because I feel like we’re all sometimes at places in our life when we feel like we haven’t been doing enough or haven’t gotten enough done.”

Senior Olivia Goodspeed took on the role of Regina George from Mean Girls.

“With Regina, it’s kind of hard to relate to her because she’s an evil girl, but if you think about it—don’t we all want a little bit of the power and demand the stage that she has?”

Like other aspects of life, the senior musical theatre majors felt the effect the COVID-19 pandemic had on their education.

“It’s been odd because both of our years as upperclassmen we couldn’t really perform,” Myers said. “It feels like we just started, and now it’s over.”

Despite the barriers, seniors were pleased to be able to perform on stage again and seek a sense of “normal.”

“Look at the last two and a half years,” Simmons said. “You gotta be adaptable in order to be able to get punched in the gut and get back up and just move on.”

After completing their education in May, seniors had a variety of plans, ranging from performing on cruise ships to pursuing a career with major entertainment companies.

“I will be going to the Disney college program in July,” Myers said. “Hopefully from there, I’ll continue to work for Disney.”