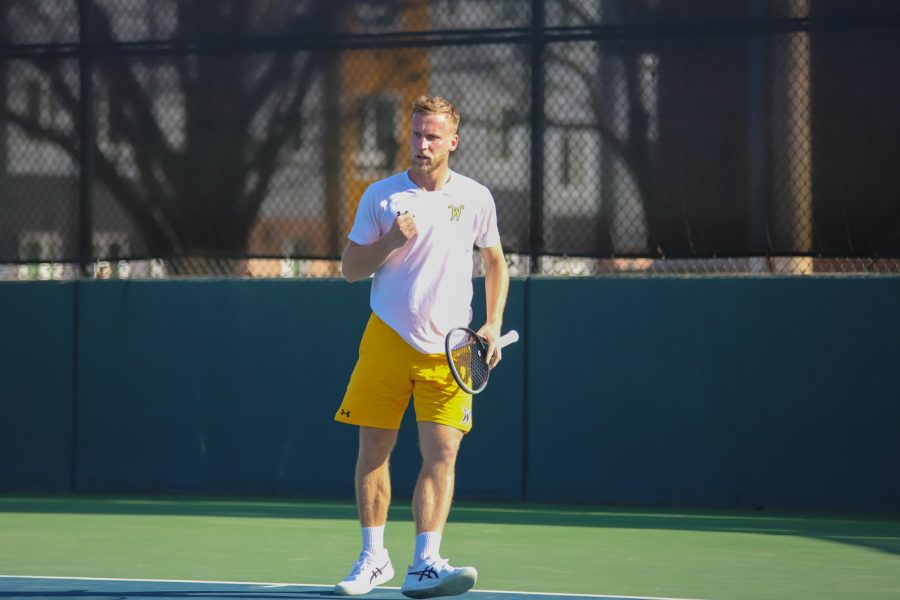 After suffering back-to-back losses during the ASU Tournament, Wichita State men’s tennis team bounced back, picking up a pair of wins in their first doubleheader of the outdoor season against Cowley College and Northwest Missouri State Saturday at the Coleman Tennis Complex.

“Overall, it was a good day,” Head Coach Danny Bryan said in a statement for GoShockers. “We were expecting two tough teams, and that’s what we got.”

Going 6-1 versus Cowley, freshman Kristof Minarik and redshirt sophomore Alex Richards gave the Shockers a quick lead in doubles, pulling off a 6-3 victory at court one. Cowley responded with 6-3 victory at court two resulting in a tiebreaker match from sophomore Luka Mrsic and redshirt junior Orel Ovil. The two fought to clinch the Shockers a 1-0 lead finishing with a 7-6(8) finish.

The Shockers continued to pick up five of the six single matches. In the first set, Ovil, at court three, and redshirt sophomore Ray Lo, at court five, picked up two wins, followed by redshirt junior Nicolas Acevedo 6-2 and 6-3 victories. Mrsic and Richards completed the final two victories for the Shockers at courts four and six.

“We got challenged a lot,” Bryan said. “Cowley is the No. 1 junior college team in the country. They have a lot of really good players, and we had to work for that win.”

The Shockers continued their streak as they picked up a 7-0 sweep against Northwest Missouri State.

Freshman Jackie Lin joined Lo in the doubles where they picked up a 6-3 victory against the Bearcats. In court two, Ovil and Mrsic clinched the Shockers the doubles victory going 6-1.

The men continued their sweep winning all six singles matches. Richards and Lo both battled their way to victory with 10-point tiebreakers, finishing 10-8 and 10-7 in the third-set.

“In the second match, they were also tough,” Bryan said. “Already playing a match that day, I think some of our guys got tired, but I think it’s great that we had to work through it, and Alex and Ray ended up still finding a way to win.”

The Shockers improve to 11-8 leading into a five-match stretch against American Athletic Conference opponents. Up next, WSU heads to Dallas to take on Memphis on April 1.