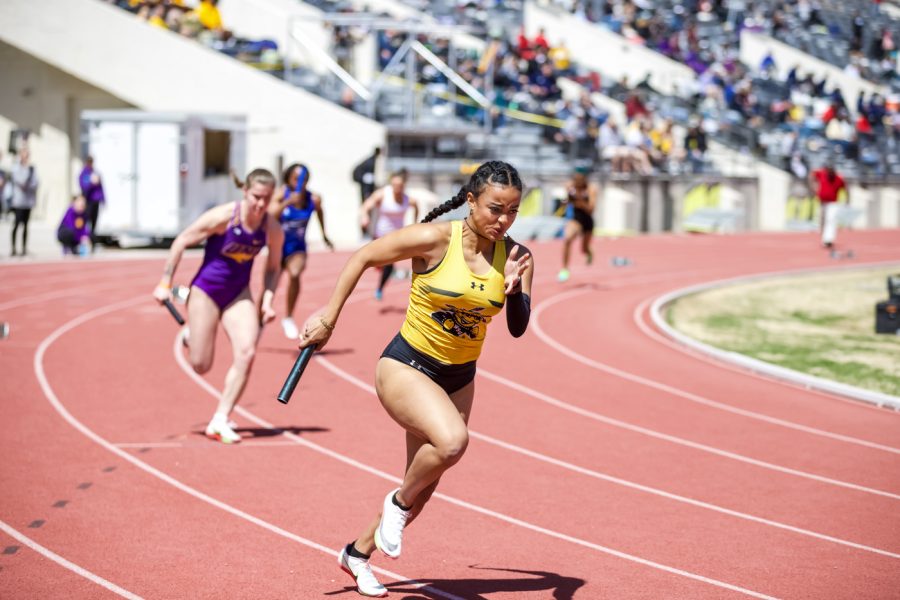 Nerea Quiros runs during the KT Woodman on April 9 at Cessna Stadium.

The Shockers competed Wednesday through Saturday in the KT Woodman Classic at Cessna Stadium. Several schools from the midwest area competed against the Shockers including several Division-II schools, junior colleges, and NAIA colleges as well. The meet also featured four division one schools including the Shockers.

“So that makes this track meet wonderful for all the athletes involved,” Head Coach Steve Rainbolt said. “As teams, the athletes from those three Division-I schools benefited from a wide array of small college athletes that here and there provided some terrific competition .”

On the men’s side for the Shockers, freshman Brady Palen took first place in the high jump and set a personal record of 2.18 m/7-1.75.

“Brady has done some things in practice and other meets where if you are a high jump enthusiast like I am and you know what you are looking for, you can see evidence at the takeoff,” Rainbolt said. “You can see evidence over the bar. Sometimes at 6’10 you go that guy is ready to jump 7’1 or 7’2 or higher.”

Freshman Joakim Genereux also set a personal record of 20.9 seconds in the 200m dash and moved up to No. 3 on the Shockers all-time list.

Michael Bryan produced a strong performance in the hammer throw in addition to other strong performances this season. Bryan also competed in the John McDonnell Invitational in Fayetteville, Arkansas on Thursday, April 7 and won with a throw of 70.33m.

On the women’s side, freshman Faith Turner jumped a personal best 12.18m/39-11.5 in the triple jump. Her jump marked her fifth triple jump time this season. Junior Abeba Sullivan finished second in the women’s 5000m with a time of 16:58. 30 minutes.

Hunter said Sullivan potentially cut 40 to 50 seconds off of her personal record in the 1500k. She recorded a personal best of 4:34.12 minutes and finished seventh.

“She became a big hitter in the conference just off of that one run,” Hunter said.

Freshman Rylie Vandaveer and Bryce Merriman finished in the top two spots of the men’s 1500m. Vandaveer won with a time of 3:53.61 minutes.

“I was really excited about the group,” Hunter said. “They had a wonderful night to run first of all. The weather was absolutely perfect and that led to some really good performances for our team.”

Up next, most of the team will compete at the Sooner Invitational and Mutli on April 15- April 16.