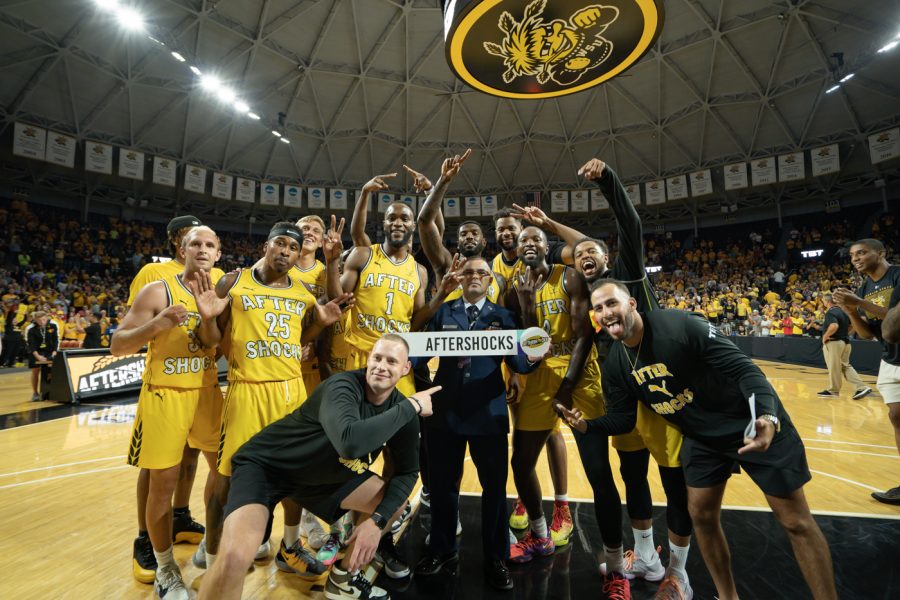 The Aftershocks celebrate following their victory over Team Challenge ALS on July 20, 2021 inside Charles Koch Arena.

The Basketball Tournament is returning to Koch Arena for the third time next month, and the brackets were released Wednesday morning.

TBT, founded in 2014, is a $1 million, winner-take-all summer basketball event for collegiate alumni that is broadcasted live on ESPN networks.

Games will take place in Charles Koch Arena July 22-25. The Roundhouse will also play host to its first-ever TBT Quarterfinal matchup on July 27 with the Wichita Regional Champion facing the winner of the Omaha Regional. The winner will advance to the TBT semifinals in Dayton Ohio.

The team, organized by Zach Bush, J.R. Simon and Garrett Stutz, is composed of alumni from Wichita State as well as a few other colleges.

If successful, the AfterShocks will advance to the second round on Saturday, July 23 at 7 p.m. They will face the winner of the No. 4 seed Stillwater Starts (Oklahoma State alumni) and No. 5 seed Air Raiders (Texas Tech alumni). After the second round, the winner will compete in the Wichita Regional Championship on Monday, July 25 at 8 p.m.

Tickets are available at goshockers.com/tickets.