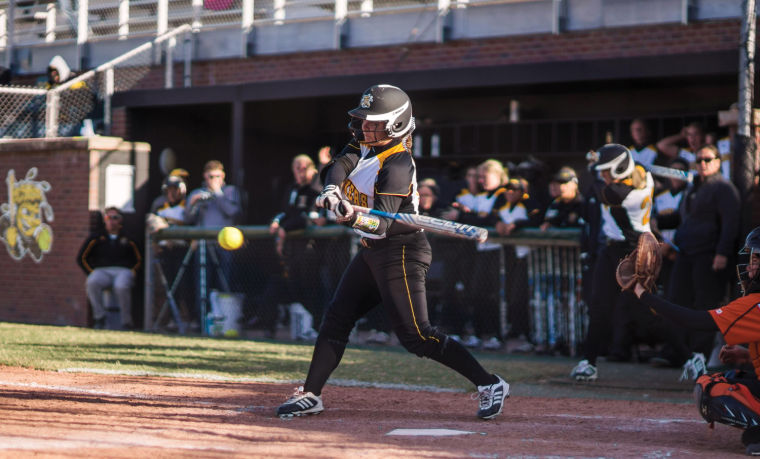 WSU batter takes a swing at the pitch during Saturdays game two against Cowley County Community College at Wilkins Stadium.

In the first game, the Shockers got ahead and secured an 8-0 win against the Red Devils.

Kaitlyn Malone pitched three strikeouts to the first three Red Devils up to bat. In the second inning, Erin Carney got hit by a pitch and walked to first, and immediately after, Liz Broyles knocked a home run out of left field.

Melanie Jaegers hit a line drive up the center that put her on second, and Michelle Dixon put a nearly identical hit in left field that allowed Jaegers to score. With a hit over the Allen County centerfielder by Molly Baker, Dixon scored, putting the Shockers at a 4-0 lead going into the third.

After Malone threw three more strikeouts in the top of the third, Baker drove another ball to right field, allowing Paige Luellen to score in the bottom of the fourth.

In the fifth inning, Ashley Johnson laid down a bunt that put her safely on first, and Megan McCracken walked shortly after, putting runners on first and second. A home run by Cacy Williams allowed all three Shockers to score, giving Wichita State an 8-0 lead at the start of the sixth.

Malone pitched five innings and finished the game with nine strikeouts. Hunter Stohlmeyer pitched the final two and had one strikeout.

“Katie and I have been working on a few things, she’s making some adjustments in the game, and I think she’s attacking it really well as a freshman,” said pitching coach Samantha Sheeley. “I thought Hunter did really well as well, she came in and had three up-three down both innings.”

The Red Devils finished the game with two hits, one error and no runs. The Shockers won with 10 hits, no errors and 8 runs.

The Cowley County tigers gave WSU a run for their money in the second game, but the Shockers bounced back and come out with a 5-3 victory.

Jordan Haya and Stephanie Couser of Cowley County scored early in the first inning, giving the Tigers a 2-0 lead into the fourth, but a home run by Carney shortened the Tiger lead by one.

Tiger player Couser was able to score again in the top of the fifth, and the Shockers returned the favor with 4 runs. First, Ali Vandever drove one to center field allowing Kelli Spring to score. Megan McCracken came in with a double that allowed Luellen to score, and Williams placed a sacrifice fly into deep centerfield that allowed Vandever to score.

Two batters later, Broyles drove one up the middle that allowed Johnson, who was running for McCracken, to slide into home, giving the Wichita State their 5-3 lead and win.

The Shockers made a pitching change, Sloan Anderson to Malone, in the top of the sixth, and Malone finished the game.

“I don’t necessarily feel like we played bad. I think we had some hits right at people and had some balls that I think we could have had some better swings on,” head coach Kristi Bredbenner said. “At the end of the day, we’re always going to have some games where we get down, but today we battled back, and I never felt like we panicked.”

“I felt like we did really well. I was proud that we got down in the second game but kept fighting,” Williams said. “We put some hits in play, and we had different people string things together as a team, which was really well done.”

Next weekend, the Shockers will welcome the Coffeyville County Ravens and the Johnson County Cavaliers to Wilkins Stadium for games at noon and 2:00 p.m.