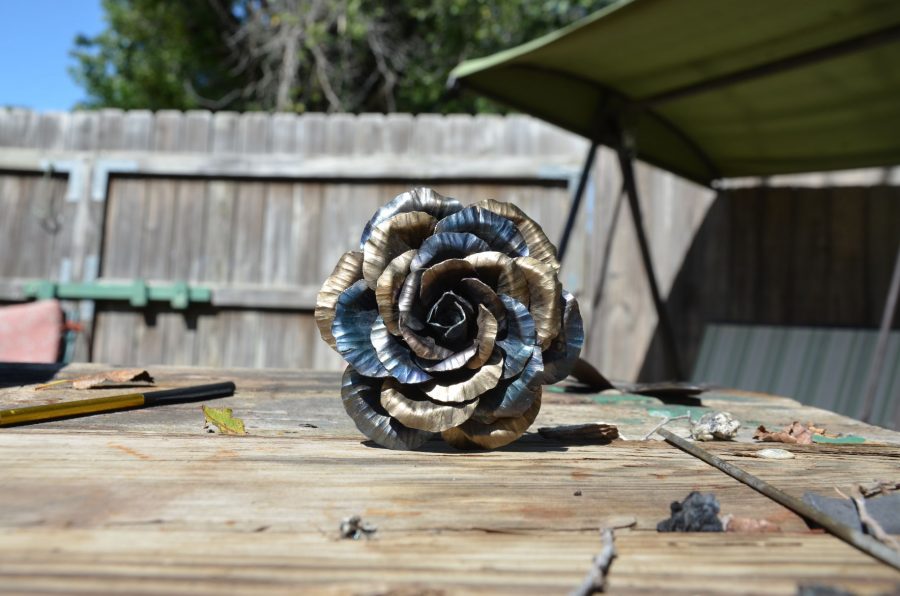 To most people, blacksmithing has been a flame that has long since been squelched over the ages. Only few people are left today that can call it a profession and the few that do are masters.

Contrary to that belief, sophomore Jacob Hoggatt has been hammering away at metal for more than two years now, making items such as metal crosses, flowers, doves and even knives.

Hoggatt said he first got the idea one day when he was at his grandparent’s house. Since then he has built make-shift forges there out of any spare parts he can find.

“I thought to myself, ‘What’s something that takes a high skill level that I can do that’ll take me a while to get good at?’ I just chose blacksmithing, because it is cool and I’m a pyromaniac.”

When recalling the first thing he ever made, he said there was no way he would ever to show it to anyone because it was so bad.

“I took a piece of mild steel and I stuck it into my make-shift forge flower pot I built. It looked like a nuclear reactor almost. I filled it completely up with charcoal and then I just beat it with a cast iron anvil until it resembled something that maybe looked like a knife,” he said. “Then I took a limb off a tree and used it as a handle. I won’t show anyone because it is by far the worst thing I have ever made, but I definitely think I’ve improved a lot since then.”

Compared to his first knife he made, Hoggatt said once he got better he started being approached by different people including some experts.

“I started making railroad spike knives, which a lot of people seem to like and I actually had a knife connoisseur buy one from me which really freaked me out at first because I had no idea he was such an expert.”

Hoggatt admits he is still learning and says experimenting is one of the ways he helps himself improve. However, with all of the success, he finds himself making mistakes.

“I’ve made a lot of mistakes before, like a lot of times I’ll pick up something and forget it’s hot,” he said. “But for me, I’ve found out that it is much worse to touch a 400-degree piece of metal than a 2,000 piece of metal because the later of the two just instantly burns off your nerves. Whereas the 400 degree one leaves your skin burning forever.”

Not knowing anyone to ask for advice, Hoggatt said he would often go onto YouTube to learn how to make something. It wasn’t until recently he found other blacksmiths in his area.

After a couple of years of experimenting, making a couple of forges, and mastering a few different items, Hoggatt decided to take his hobby online.

“Right now I’m selling on Etsy. I was planning on making a website to sell my stuff on but, what I didn’t realize is, calculating shipping cost is super confusing and with Etsy, it just takes care of all of that for you,” he said. “So I just think I will do custom orders from my website.

In the future, Hoggatt said he hopes to continue to blacksmith as much as he can, and if he gets enough popularity online, he says he hopes to one day to turn his hobby into a profession.