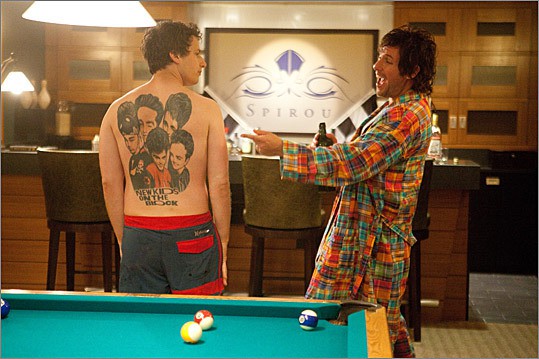 Walking into an empty theater with only four people in it, a sense of impending doom overpowered me. Just as expected, this Adam Sandler flick failed to impress me at any level.

In “That’s My Boy,” Sandler plays Donny, a charming pervert with a heart of gold who seems to know how to talk his way through everything in life, except paying his taxes. So when he owes more than $40,000 in taxes, he conveniently discovers that his runaway son, —played by Andy Samberg—he had with his high school English teacher, is now rich.

Nothing that follows is unexpected. It is obvious that the writers tried to control the direction of the plot at every instance, leaving it boring and uninspiring. The plot weakens, going from bad to worse by the second, as the contents of the movie go from disgusting to deeply scarring. The movie is offensive and degrading to women on multiple levels.

Sandler fails by trying too hard to be funny. His accent is overdone, fake and annoying. It is sad to see someone with promising talent as a comedian fail to be funny in a well-rehearsed medium.

Quite similar to him in both history and comedic talent, Samberg seems to have taken a horrible career step by being in this cheap Hallmark-holiday exploiting film.

Vanilla Ice’s persona on the screen is probably the only aspect of the movie that is more disturbing than the disgusting, crass vulgarity that floods the plot.

Washed up, it comes as no surprise that Ice was barely featured in the movie’s promotions.

It is painful watching Ice behave like a teenage high school kid, making one hope that he would start dealing with mid-life crisis better.

The only impressive performance comes from the “Heroes” star Milo Ventimiglia, who embraces his character, something that has always eluded Sandler.

A complete disaster, “That’s My Boy” is yet another low for Sandler, and a definite no-no for anyone.