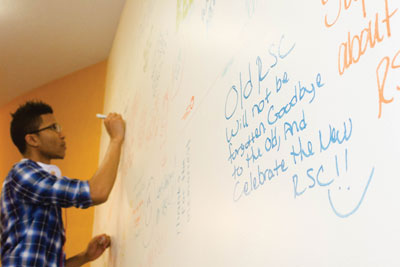 Students wrote their goodbyes to the RSC on the wall.

Activities were held at various locations in the building.

In the Director’s Office located on the second floor of the RSC, students were able to make their own ice cream sundaes. Students were given the option of chocolate, caramel or strawberry topping along with nuts and M&M’s.

Carnival games and cotton candy were handed out in the Activities Office, and in the basement of the RSC, free bowling, billiards and video games were available.

A photo booth in the Graphics Office allowed students to take a picture with the background being anywhere in the RSC, while in Lords and Ladys a historical display was put up for students to see.

Students were also able to sign a wall in Shocker Square, which had been painted white, and write their farewells and good- byes to the RSC.

The wall, however, will be torn down once the renovation begins.

“Tomorrow in Topeka, the state capitol, they open the bids up from the general contractors that are bidding to do this job. So we will know very shortly who

Vadakin also explained that whoever the general contractor is, they have some say as to where they would like to begin construction.

The architects who designed the layout have said the most logical place to start is the north end, said Vadakin. The lead architect is David White.

“It’s going to be a terrific addition to this campus, one of the nicest student union build- ings in the world,” Vadakin said.

Avi Zacherman, activities adviser with the Activities Office, said that since the RSC will not be available to host events that the Student Activities Council

offer, they are looking at other venues.

“We are student fee funded so students have already paid for these events,” said Zacherman, in response to whether SAC will begin to charge because other venues come at a price.

At the moment SAC will continue to host its events free of charge to students.

“The entire north end, two- thirds of the RSC is going to be closed down for renovations and it’ll be the south end that will be opened,” said Nancy Loosle, director of activities.

A new temporary recreational center will be created on the second floor in room 223, since the basement will be closed off to students.

“One of the biggest challenges is cost because the RSC is free to use to student groups and a lot of some of these other venues are not,” said Loosle.

While a new student center will be available to students that will be joining the WSU community in years to come, Manny De Los Santos, a senior, says he will not be able to use the new RSC since he will be graduating in December.

De Los Santos acknowledges that although the renovation will give the RSC a face lift, he will no longer have a place to hang out, as he would usually hang out with friends by the fireplace.