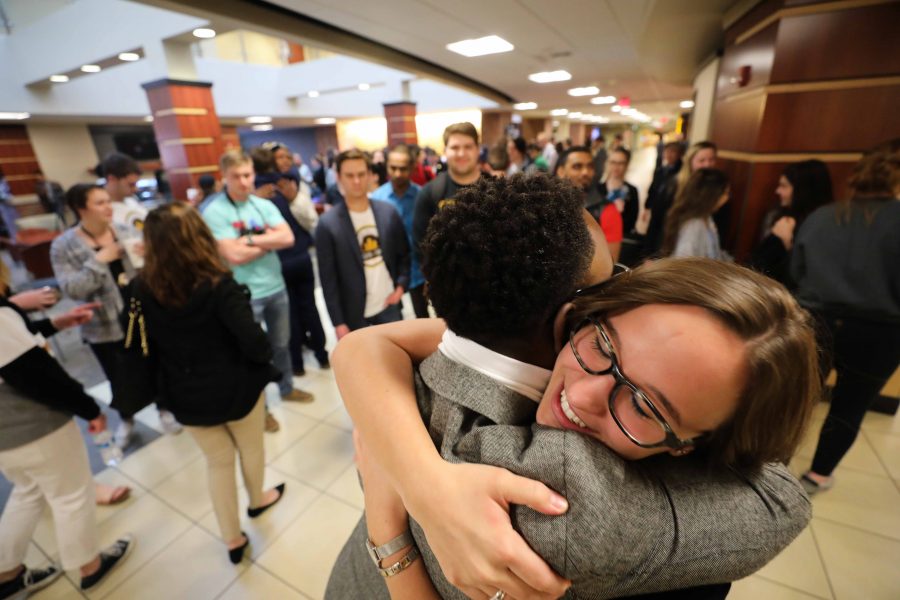 ‘She hasn’t really been a yes man’

Paige Hungate knew she wanted to be president in the 5th grade.

After three days of voting, the results of the 2017 Student Government Association election were announced at 5:30 p.m.

United We Stand, led by Hungate and Vice President-elect Breck Towner, won with a reported 58 percent of the vote.

The hour before the election results were announced, Hungate ate a Nature Valley crunchy oats and honey granola bar and listened to Towner sing the Irish folk song “Danny Boy” on repeat.

Towner worked on sales budgets for class, in between chugs of water.

Hungate thought about her future: the first 50 days if elected — or what to do if not.

She left Sigma Alpha Epsilon ten minutes before the announcement.

Her mom talked her through the five-minute walk to the RSC. She told Hungate God wanted her in the Bluestem Lounge, the announcement room, for a reason. She told her to not be nervous.

As she walked, Hungate remembered a comment from engineering instructor Alicia Newell, said after Friday’s debate: “My favorite part (of the debate) was when my 10-year-old daughter said, ‘Wow, she’s an engineer and wants to be president, mom,'” Newell said.

“At that moment, she saw the endless possibilities for herself one day.”

‘Tell them what you believe’

Active in politics and a computer science major, Hungate knows what it’s like to be a woman in a man’s world.

She’s one of a handful of women in her computer science classes, classes that all meet in the same room on campus.

Hungate spends more than eight hours a week in Jabara 226. It’s an older classroom with chalkboards up front and no outside windows — just four white walls and two pinkish-red doors.

She’s not afraid to email department chair John Watkins to raise concerns about her professor and encourages her classmates to do the same. The class average on the latest exam was 45 percent, Hungate said, and the average homework grade is 62 percent.

“It’s just like emailing a senator,” Hungate said. “Advocate for yourself. Tell them what you believe.”

Within minutes, Hungate has convinced most of the class to send emails to the department chair.

“Thank you,” Hungate said with a grin.

“See, this is a grassroots movement.”

Fifth grade wasn’t just the start of Hungate’s lengthy presidential bid. It was also the year her parents divorced, a part of her life she spent much of with her grandparents, Lonnie and LaDonna Snook, and her dad, Trent.

The biggest reason for being ‘conservative’ is taxes, to be quite honest. I think conservatives get that right.”

All that bonding with her father and grandparents helped shape her personal and political beliefs — beliefs described by others as conservative self-described by Hungate as libertarian.

“The biggest reason for being ‘conservative’ is taxes, to be quite honest. I think conservatives get that right.”

Conservative or libertarian, Hungate is assuredly Republican. She interned at Jerry Moran’s D.C. office her freshman year and accepted a field representative position for Moran her sophomore year. First semester of junior year she was promoted to field director in Moran’s campaign, where she managed 23 Kansas counties. Now she’s an intern at Moran’s official Wichita office, assisting on casework inquiries.

Hungate’s political experience dates back to 8th grade, to a campaign she’s now embarrassed by.

In 2009, Hungate and sister Haley canvassed around her northeast Wichita neighborhood for Todd Tiahrt’s run for Senate — the year he ran against Jerry Moran.

As class begins, Hungate’s body language becomes purposeful. She sits up straight, doesn’t fidget. Her bespectacled brown eyes don’t wander far from the board, only straying to write something in her notebook.

Despite disagreeing with his grading methods, she pays attention to her instructor as he teaches a lesson on data structures.

Halfway through class, she takes out her laptop, adorned with symbols of some of her favorite things: a Senator Jerry Moran sticker, the Wichita flag, the Delta Gamma symbol.

She’s always had this fascination with the Reagan family.”

Perhaps the most telling sticker on her laptop, though, is a headshot of Ronald Reagan.

Reagan has always been her role model, Hungate said, both in his politics and as a person.

Her older sister, Haley, said Paige used to take her Reagan obsession to the extreme.

“In high school she used to Photoshop herself with Ronald Reagan and do a ‘Me and Ronnie’ kind of thing,” Haley said with a laugh. “She’s always had this fascination with the Reagan family. She would sort of drop herself in place of Nancy — even if she has the utmost respect for Nancy.

“She kind of stopped when she got into college,” Haley assured.

Haley said Paige’s love of Reagan speaks to her character and political passion.

That passion, fueled by a desire to mend a divided student government, was channeled into Hungate’s presidential ticket, United We Stand.

Hungate said the name represents her goal of eliminating division both in SGA and campus-wide. She said tension has defined this year’s session of SGA, and she wants to change that.

“We want to unify everyone.”

Hungate said she’d like to take SGA in a “positive direction” where political affiliations and social movements don’t decide SGA’s goals and vision.

To curb that, Hungate said she sought out liberals and others she doesn’t politically agree with to flesh out her 40-person ticket.

The campaign now behind her, Hungate said she plans to meet with her senators to get to know them each personally. She’s putting together a potluck dinner with SGA and the administration. She said she wants to put to rest the Interfaith Prayer Space debacle.

Her vice presidential running mate, Breck Towner, said Hungate plans on sticking to the duties outlined in the SGA Journal “as closely as possible.”

He said her dedication to sticking to those duties and “not just going along with (SGA’s) plans” has made members of the student government executive team go after Hungate in the past.

Hungate said her outspokenness resulted in insults and bullying by President Shepard and members of his team over the last two SGA sessions.

Eye-rolling and glaring by differing sides in senate meetings became a staple of many Wednesday meetings, Hungate said.

Bullying and turmoil caused senators on both sides to leave SGA. One former member went so far as to leave the university.

Hungate will begin her third year in the organization in the fall.

“She hasn’t really been a ‘yes man,’ for lack of better words,” Vice President-elect Towner said.

Hungate said her male colleagues tend to look at her differently after they’ve seen her work.

“It’s cool to walk into a classroom with a bunch of guys and three girls,” Hungate said. “A lot of times the guys are like, ‘Oh, that girl doesn’t know anything,’ but then you prove that you’re just as smart — or smarter — than them.”

Hungate said she realizes the POTUS aspirations are lofty. After graduation, she hopes to pursue state politics. She looks up to Nebraska Sen. Ben Sasse, she said.

“Sure, I want to be the president, but if I could be a senator for Kansas, that would be a dream come true.”

Sure, I want to be the president, but if I could be a senator for Kansas, that would be a dream come true.”