‘Would you mind engaging us?’

From Compton to campus and plumber to liaison, Darryl Carrington has never known a stranger. He and his Hugo Wall team recently finished surveying the Fairmount neighborhood to find out residents’ concerns about their community. 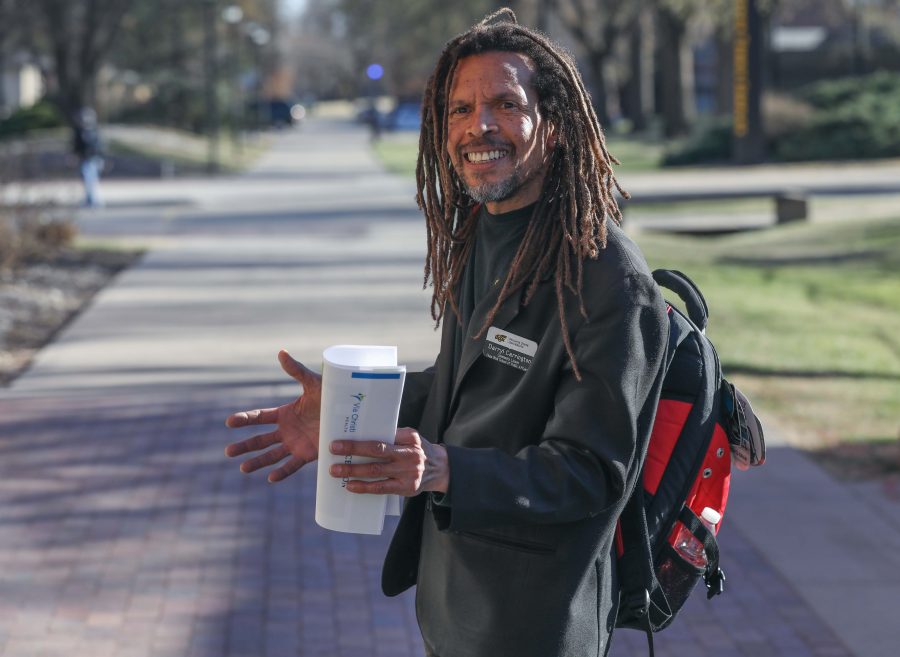 Community liaison Darryl Carrington stands on Parkview, the walkway that stretches from Fairmount Park and neighborhood into WSU.

There aren’t many 59-year-olds with dreadlocks.

So when bright-eyed and perpetually-moving Darryl Carrington walks either side of 17th Street — whether in his neighborhood or on campus — people know who’s coming.

“There you are, Bob Marley!” a man shouts at Carrington from his porch, breaking into a grin.

Carrington smiles back, waves and asks the man how his day’s going. Dressed in his usual nylon suit jacket and well-worn jeans, he doesn’t stop walking — he has work to do.

Walking past the next house on the block, Carrington greets a man grabbing the mail: “Hey Norman, it’s good to see you — I got your survey, by the way.”

Right now Carrington is walking his neighborhood, directly across from Wichita State University, surveying his neighbors about their community — what they like about it and what they don’t.

Carrington’s life revolves around his neighborhood, a neighborhood that spans both sides of 17th Street between Oliver and Hillside streets.

He, his wife Cassandra and son Oases settled into Fairmount in 2005 after moving from Compton, California, where he spent the first 40 years of his life. They were on the way to Charleston, South Carolina, when a medical emergency made them stop in Kansas.

Twelve years later, after the birth of a daughter, Mirage, and involvement in countless organizations, Carrington has transitioned from the plumber of Fairmount neighborhood and WSU to someone entrusted by University President John Bardo to strengthen the bond between WSU and its neighboring Fairmount community.

The surveys and Carrington’s role as community liaison —  a position he was unanimously chosen for among a number of applicants —  are part of the university’s “Enough is Enough” program, led by former University General Counsel Emeritus Ted Ayres.

The program was developed in response to the death of Letitia Davis, who was raped, beaten, burned and left for dead in Fairmount Park in November 2014.

Carrington said the incident immediately made the community evaluate themselves.

Carrington does a lot of walking in his neighborhood. He said everything he needs, whether it’s food, services or company, he can find within it.

“I don’t get in my car for anything.”

He only stops walking to pick up trash, and even then he tends to scoop it up without slowing his pace.

He and two of his graduate assistants, Craig and Sean, have surveyed as many of the 3000 Fairmount neighborhood residents as they could since November. That’s roughly 800 doorbells rang and front doors knocked.

But Carrington doesn’t want each day to be defined by numbers.

“I want it to be defined by quality interaction.”

Some blocks are more receptive than others. Some residents peak out — immediately followed by a hearty greeting from Carrington — but don’t answer the door.

“I guess we got to get off their porch. They told us.”

Carrington said he understands residents’ reluctance to answer the door.

When someone does open the door, Carrington cuts to the chase: “Would you mind engaging us?”

He tells each resident the survey will take just five minutes — each survey ends up taking at least 15. They don’t mind. Carrington is giving each resident his full attention in turn, listening to each concern, whether it’s about Fairmount Park, WSU, stray dogs — anything.

Johnny on the spot

Described by friends and colleagues as the “epitome of earnestness,” Carrington said he wouldn’t be in his current position if it weren’t for being in the right place at the right time.

Carrington has lived two blocks away from the university since moving to Wichita. Any time a plumber was needed for anything, he was the closest man for the job.

“I was Johnny on the spot, middle of the night, whenever — sleet, snow, whatever,” Carrington said.

What’s the word for someone who’s always optimistic? Because that’s him.”

Carrington worked tirelessly as the university and community’s plumber, getting to know and connecting with people from both sides of 17th Street.

He quickly became involved in the Fairmount United Church of Christ, where he now serves as moderator.

So in 2015 — in response to the death of Letitia Davis — when the Kansas Health Foundation gave (after application) the university’s Hugo Wall School of Public Affairs a $250,000 grant to raise the quality of life in the surrounding community, the university set out to hire someone who could “kick the communication world on both sides — the academic world and the world around it,” as Carrington put it.

That’s why he’s spent each day on neighbors’ doorsteps — not that he wouldn’t otherwise.

Steady as a pillar

Walking past the Fairmount block he said has been the hardest to engage, Carrington muses: “Maybe they just don’t feel the love.”

It doesn’t seem hard for Carrington to feel the love.

“What’s the word for someone who’s always optimistic? Because that’s him,” Crossette said.

Crossette has spent about four hours a day, five days a week since November surveying the community with Carrington.

Crossette’s enthusiasm has wavered from time to time, he said, but Carrington’s “uber-optimism” has been steadfast.

Multiple residents have threatened Carrington for his efforts. Carrington, a supporter of community-oriented policing (his father was an officer), was assaulted in Fairmount’s community garden in 2014 by a resident frustrated by the shooting of Michael Brown.

Despite pushback, Carrington said he never feels threatened or discouraged — his coworkers and friends keep him steady as a pillar.

“They wont let me fall down even if I try.”

So many irons still in the fire

Carrington and his crew finished the community survey mid-February.

It’s one of many projects of Carrington’s – one he made to 100 percent completion.

Steve Bridwell, pastor of Fairmount United Church of Christ, said that because of Carrington’s constant desire to take on new projects and to engage people, projects he gets started on don’t always get done by him — although they tend to get done by someone else inspired by Carrington’s work.

“I admire that greatly,” Bridwell said. “It’s a life being well spent. If he had no drive, no imagination, if there was no thrill at being alive, we would have a man in his late 50s who has pretty much laid dead already — he just doesn’t know it.

“I suspect the man is only going to have one regret when he’s laying there dying, taking his last breath — there’s so many irons still in the fire.

Carrington has served as the church’s top elected officer since December.

Bridwell remembered that in preparation for that position, he and Carrington made plans to have lunch on campus.

“I don’t remember where we were going to eat because we never wound up there,” Bridwell said. “In fact, we never got that conversation that day because we kept bumping into people who were either hugging on him or stopping to talk to him.

5 Responses to “‘Would you mind engaging us?’”