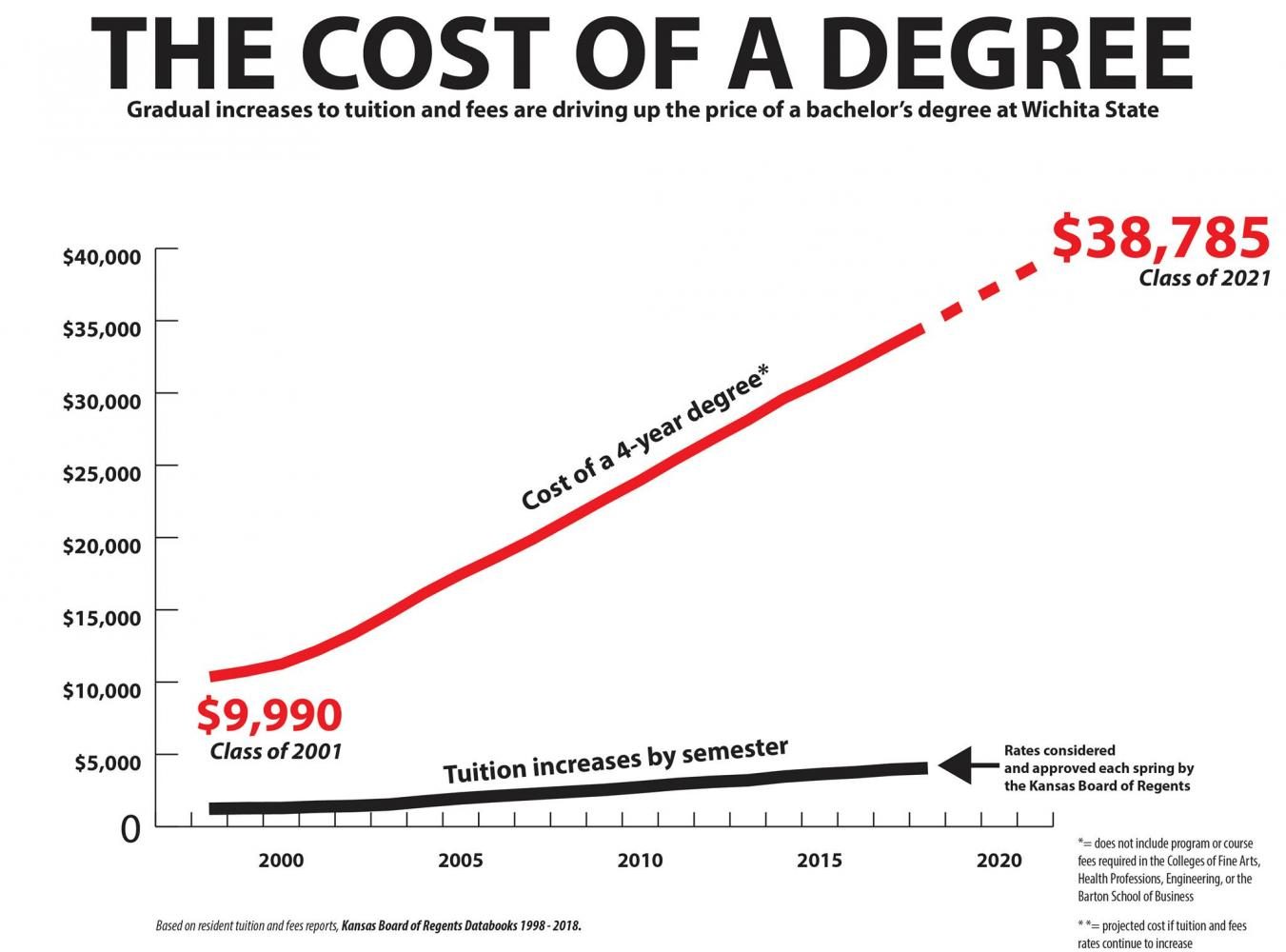 The cost of a degree at Wichita State continues to climb, tuition and fees increase

Resident tuition and fees at Wichita State have more than tripled in the last 20 years — not including course- and program-specific fees for engineering, health professions, or fine arts students — and last week the Kansas Board of Regents approved another tuition and fees increase.

Last week, the board of regents approved a 2.5-percent tuition increase and a 2.45-percent fees increase at Wichita State for the upcoming school year.

“We really were trying to keep it as low as possible,” Wichita State President John Bardo said. “It will cause us to have to restructure some things.” He said state funding levels, increased costs, and enrollment were the primary reasons for raising the price.

To make up the gap between state funding, tuition, and expenses, Wichita State will reallocate 3.5 percent of its resources to “fund strategic priorities of the university.”

Wichita State received the smallest percentage increase of all the regent universities — all raised tuition between 2.5 and 2.9 percent.

Although the increases — when looked at on a semester-to-semester basis — seem small, similar gradual, percentage-based increases in the past 20 years have driven the price of a bachelor’s degree at Wichita State closer to the average yearly salary of a graduate.

According to exit surveys administered by the university of Wichita State graduates with jobs at graduation, the average salary for four-year degree earners has hovered around $40,000 for the past five years. In 2017, the average graduate’s salary was $42,411. If tuition and fees continue to climb, the cost of a bachelor’s degree will surpass that number by 2024.

Multiple regents objected to increasing tuition and fees, but the measure was ultimately approved.

Regent Ann Brandau-Murguia, who voted against the proposed increase at Wichita State, said all of the regent universities — Wichita State, Kansas, Kansas State, Pittsburg State, Fort Hays State, and Emporia State — “made a great case for themselves on why they feel they needed tuition increased.”

“In the last four years, I’ve always voted for these percentage increases. But I don’t think I’ve spoken loud enough about how important this is to me for affordability and accessibility. We all tend to throw around 100 bucks or 200 bucks like it’s no big deal.

“Well, you know, I don’t know where all of you specifically live, but I know where I live, and 200 bucks is a lot of money,” Brandau-Murguia said during last week’s board meeting.

The class of 2001 entered Wichita State expecting to pay around $10,000 for a four-year degree. The class of 2021 will pay close to that amount each year, depending on the program of study.

As tuition and fees have increased, other expenses have also popped up. Engineering, health professions, and fine arts students pay course and program fees that can add more than $1,000 a year to their bills.

If a student chooses to live on campus for four years, their cost of attending a university skyrockets. Based on projected tuition and fee rates for the class of 2021, an incoming freshman who decided to stay in the cheapest living option at Shocker Hall — a shared, single bedroom — with the cheapest meal plan (and move out during the summer) for four years would spend more than $85,000 at Wichita State. 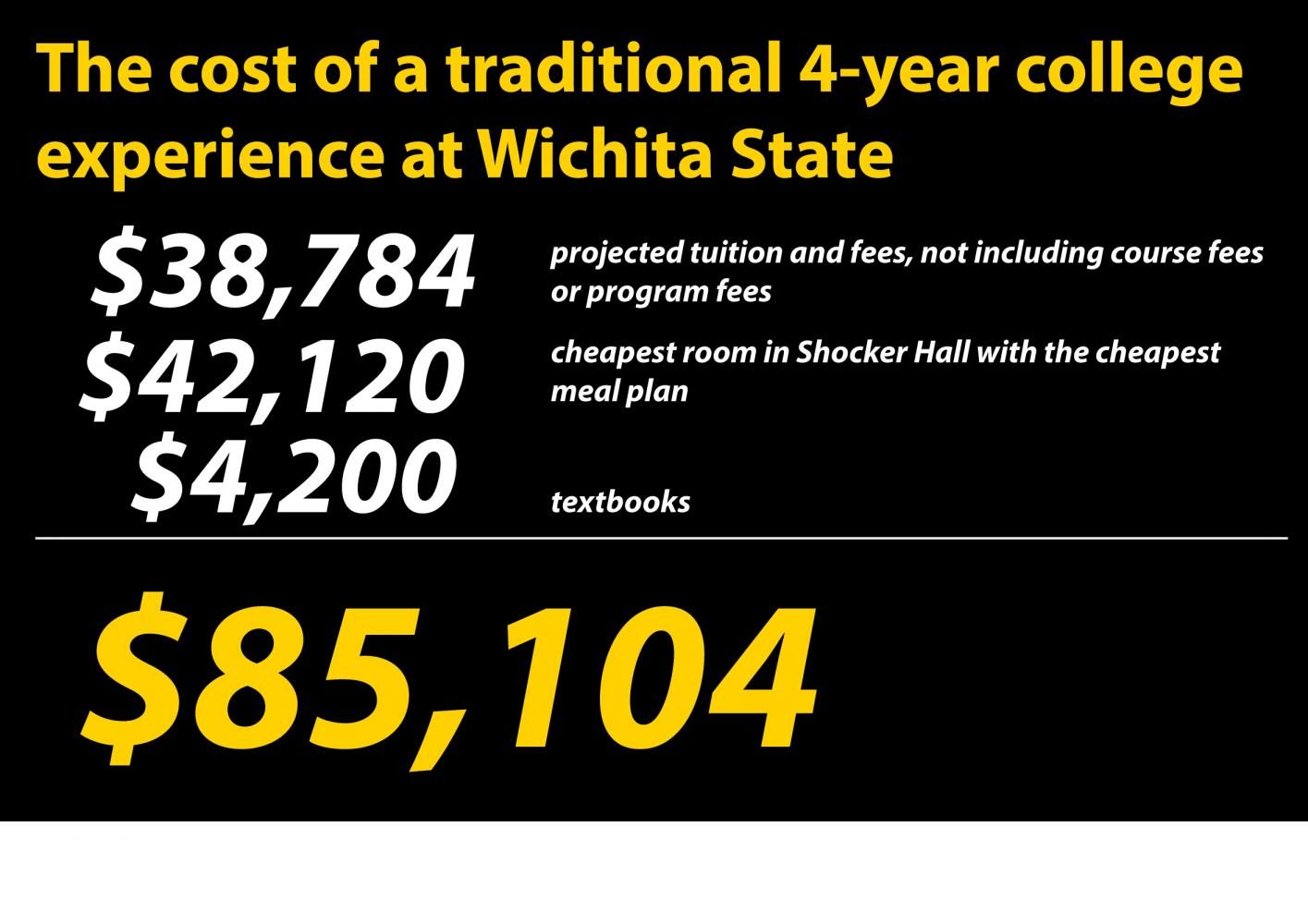 The tuition increase at Wichita State will cost resident undergraduate students about $100 more for 15 credit hours (the number of credit hours needed each semester to complete a bachelor’s degree in four years).

Bardo asked the board of regents to consider the fact that many students receive financial aid.

“So the student for whom $50 is a big deal, there is a financial aid package that also is effective in all this, particularly for low-income students,” Bardo said.

Brandau-Murguia said she thinks Kansas universities and the board of regents have been “caught in the middle of the situation” created by insufficient state funding, but someone needed to take responsibility for the increased costs to get a degree.

“Absolutely, I can sit up here and say all the popular things,” Brandau-Murguia said. “Absolutely, (regents universities) are way underfunded by the state. I’ve said that over and over again. But I don’t have any control over the state. And somebody’s got to bear the burden of the cost of the education.

“At some point there’s got to be some pushback on behalf of Kansas families to say that’s enough,” Brandau-Murguia said.

“What’s really important to me is that the bottom line from a Kansas family’s perspective, when they write their check, is how much is it going to cost them when they’re already paying taxes?”

The Kansas legislature passed a budget plan earlier this month that increased funding to regent universities but cut Wichita State’s operating budget by almost a million dollars. That will put state funding to Wichita State below what it received from the state in 1999. 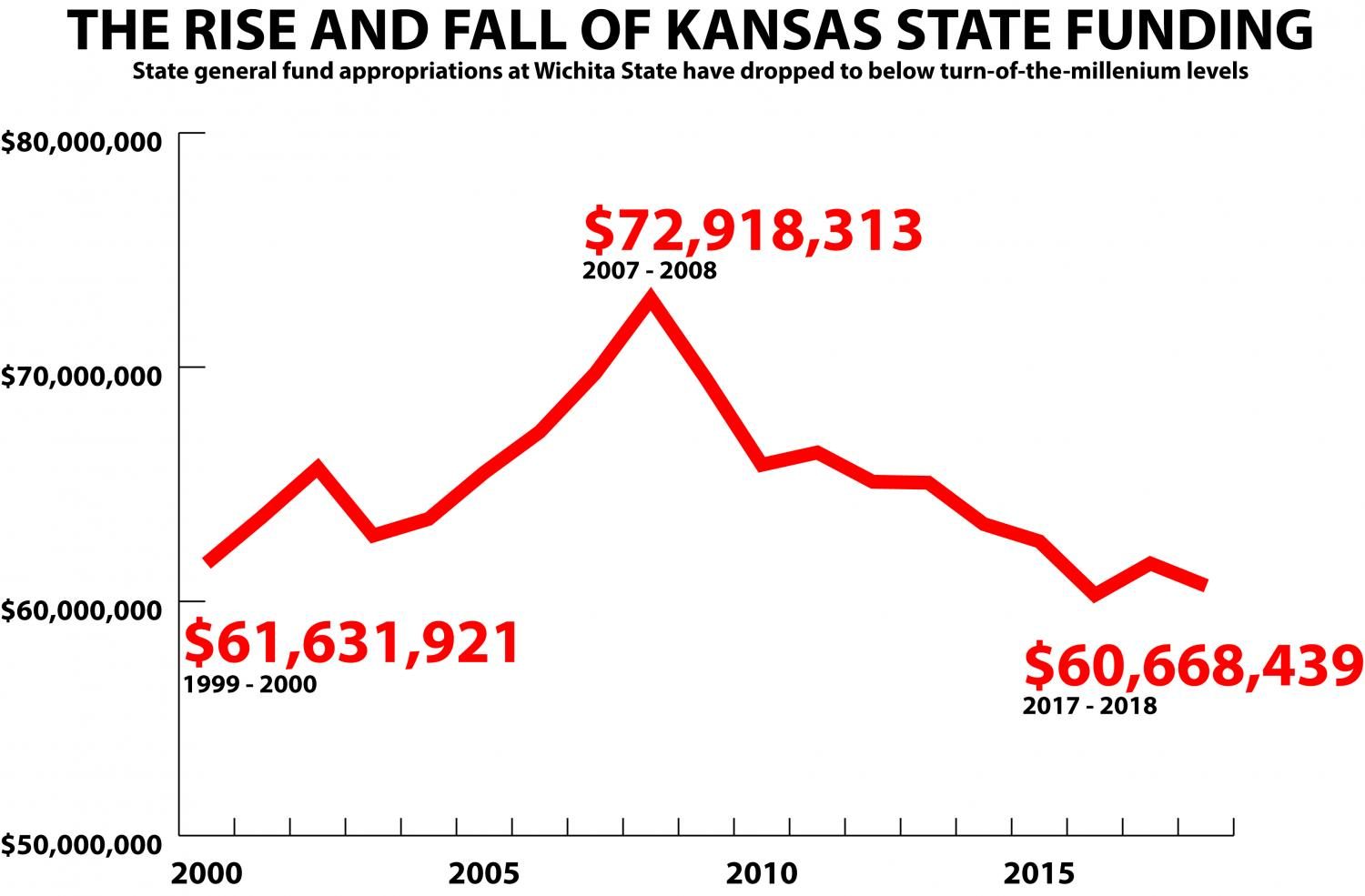 The Kansas House voted 88-27 in favor of the budget plan, and the Senate voted 27-11 in what became the second-longest legislative session in Kansas history.

A funding bill is usually passed in the spring, allowing universities to assess tuition based on what the state will contribute to the general fund of the university. But the lengthy session this year left universities unsure how the allocations would affect the upcoming school year.

One of the larger challenges, Bardo said, will be implementing state-mandated employee raises.

“So not just the ones that the law covers — because I do believe there are people who are left out under the law — and yet we haven’t been able to give raises, so we need to figure that out.

“We don’t want people to be caught in the middle. So we’re trying to think what do we cut to make sure that they get a raise, too. This is not the fun part of the job.”

The board of regents approved Wichita State’s increased student fee to fund the switch from the Missouri Valley Conference to the American Athletic Conference and the operation of a YMCA facility on Innovation Campus. Part of the YMCA building will include a new health and wellness center.

Regents questioned what the shift of conferences would cost the university.

President Bardo said the university stands to lose $1.9 million next year from the change of conferences, and that it could be five years before the university sees a positive financial impact from the joining the American Athletic Conference.

Regents then asked what a student stood to gain academically from joining a different athletic conference.

“A lot of why you do athletics on a college campus is to create the ambiance and the feeling of belonging on campus,” Bardo told the board. “What that really does is connect a student on campus, whether they go to the games or they don’t go to the games. There’s a connection there. And that connection really does have a huge impact. Second, if you care about athletics at all, you’re going to see a lot better grade of athletics, just by the nature of who will be coming in.

“But the really big issue from a student perspective, from my perspective, is the branding of who we are. That, at the end of the day, will mean a lot to the student who graduates than even going to the event.”

An undergraduate taking 15 hours a semester will pay $340 in athletic fees next year. That’s a $24.40 increase from last year.

A student enrolled in 15 hours a semester will also pay $190 for a “Health and Wellness Fee” that will fund the operation of a YMCA on Innovation Campus this year.

A committee of student leaders from universities across the state declined to endorse the Wichita State fee increase, in part because of the controversy surrounding the fee increase to operate a YMCA.

In March, the 59th Session of student government voted against a fee increase to fund the YMCA. Less than two months later, the 60th Session voted in favor of the fee increase, which had been re-packaged as a health and wellness fee considered alongside a tiered-system fee structure instead of the per-credit-hour fees of the past.

Student fees will provide $5 million a year to the YMCA to operate. Students, in turn, will receive a membership to all local YMCAs. The YMCA on Innovation Campus will be open to the general public and not exclusive to students, and students will pay for the full operational costs of the facility.

The YMCA building will also include a health and wellness center that provides drop-in daycare, which will require a fee to use. In their reports to the board of regents, Bardo and Student Body President Paige Hungate cited the need for improved health and wellness facilities at Wichita State. The board of regents did not ask any questions related to the YMCA during the meeting.

Regent Brandau-Murguia said the proposed YMCA did not factor into her decision to vote against the tuition and fee increase.

“I’d rather not as a regent get into the weeds of each university and how they’re spending their money,” Brandau-Murguia said. “That’s why we hire people to run those universities.”

“AT WICHITA STATE, I DON’T THINK ANY OF US GREW UP WITH MONEY”

President Bardo, who attended college in the early 1970s, said the price of a college degree is always on his administrative team’s mind.

“At Wichita State, I don’t think any of us grew up with money,” Bardo said of university administrators. “It’s not like we all came from wealthy families. … And everybody at the table is the same way. None of us, to the best of my knowledge, none of us grew up with a whole lot of bucks, so it was real. When we talk about these things, all of us are remembering these things. We really lived it.”

But Wichita State’s current administration, including Bardo, completed their degrees during a very different time. Bardo said the only part of his education — which includes a doctorate — that he ended up with debt on was his dissertation.

“College affordability is something that, by the nature of our administrative group, is on our minds all the time,” Bardo said.

Asked if he had any future strategies for flattening tuition and fees in the future, Bardo said he did not because there are too many unknowns.

“State funding is a flux. Inflation is a flux. Another big thing is where students sign up for classes. In other words, if everyone signs for a program that’s not very expensive — yeah, you can flatten out your costs pretty quickly. But if everyone says “I want to be a nurse,” that’s a really different cost structure. What we’re seeing is a shift of enrollment both on our campus and nationally away from the less-expensive fields to the more-expensive fields.”