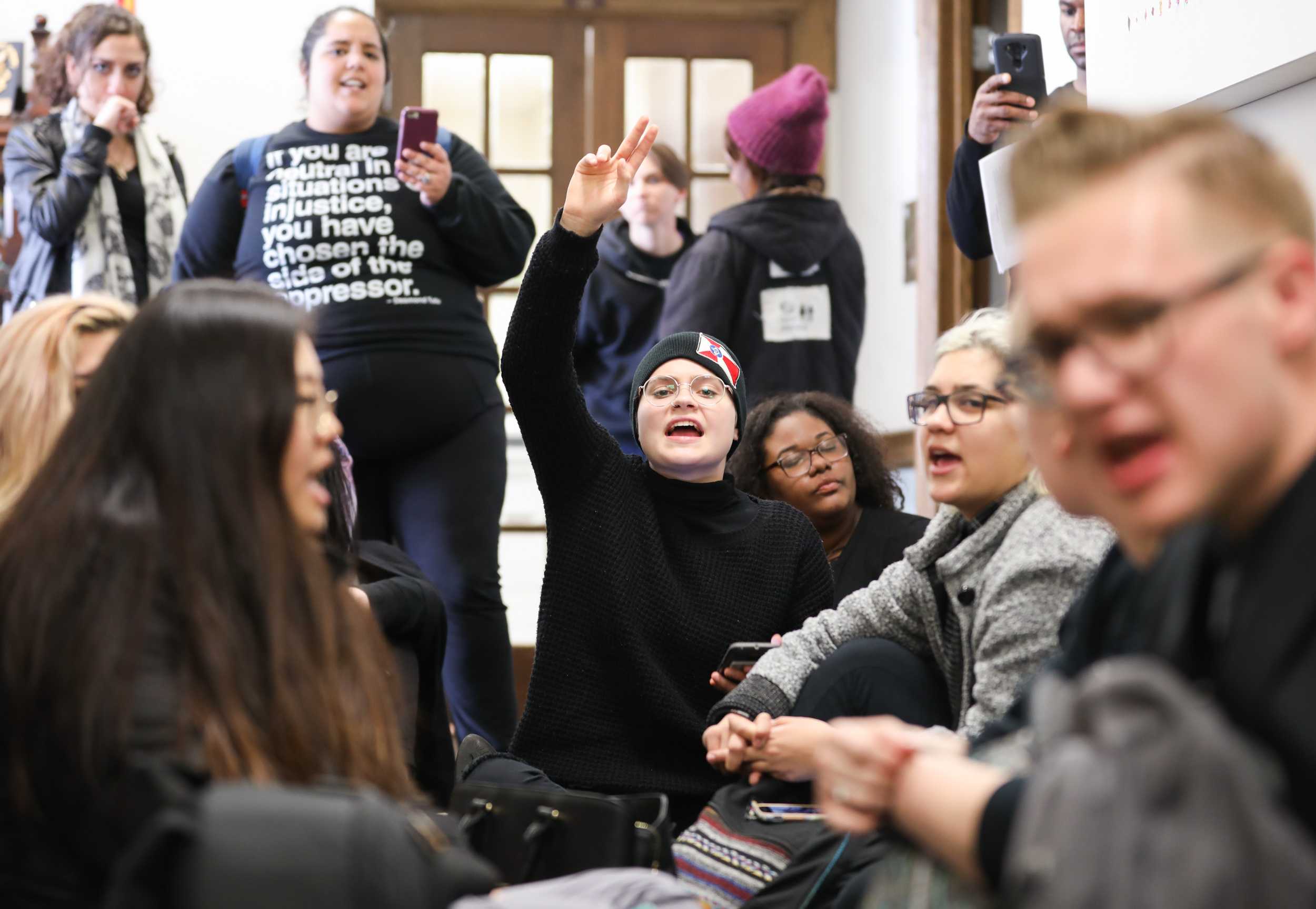 Sandra Carlo, freshman, conducts chants at the sit in outside of university president John Bardo’s office on Tuesday afternoon. The same group introduced a resolution Wednesday calling for a vote of no confidence and the resignation of WSU President John Bardo. (Mar. 14, 2017) (Brian Hayes)

Sandra Carlo, freshman, conducts chants at the sit in outside of university president John Bardo’s office on Tuesday afternoon. The same group introduced a resolution Wednesday calling for a vote of no confidence and the resignation of WSU President John Bardo. (Mar. 14, 2017)

SGA passes vote of no confidence in President Bardo

Wichita State Student Senate’s Wednesday meeting was interrupted by a group of four students calling for a vote of no confidence and the resignation of President John Bardo.

The four individuals are part of a group known as We The Students, who staged a sit-in outside of Bardo’s office Tuesday and presented a list of demands calling for transparency, shared governance, and better representation for marginalized student groups.

The resolution defines a vote of no confidence as “A motion made when most of the members of a parliament or other organization say that they feel that their leader is no longer competent to lead.”

The resolution was later amended to remove the request for Bardo’s resignation, but student senate passed the statement of no confidence by a 20-4-7 vote.

The resolution echoes the sentiments of the demands presented by sit-in protestors Tuesday, accusing Bardo and his administration of failing to participate in shared governance of the institution and not providing adequate student representation to decisions for the university.

The students highlighted the perceived neglect on the part of the administration regarding issues of black, trans, Muslim, and DACA students.

The resolution also cites cases in which reports of rape, domestic violence, and sexual assault were allegedly covered up or ignored by the university, including The Sunflower’s coverage of a student victim of stalking and the alleged cover-up included in a lawsuit filed against Wichita State and President Bardo by former Vice President of Student Affairs Wade Robinson.

“The university has incentive to under-report sexual violence: the Kansas Board of Reagents decrease university funding based, in part, on the reported number of campus sexual assault,” the resolution reads.

The resolution also cites a lack of transparency regarding the proposed building of a YMCA on Innovation Campus, which Bardo said the university will continue to pursue despite the student senate’s opposition to it. The resolution cites the issue as an example of the administration placing the will of private business over that of students.

As Vice President Taben Azad began his weekly report Wednesday, Rexy Que, Pam Saenz, Colton Hall and Carolyn Fugit — representing activist group We the Students — took to the podium. They immediately declared a resolution drafted by Que, a transgender student, calling for a vote of no confidence in President John Bardo.

“Whereas the president of the institution is selected by the Kansas Board of Regents to effectively lead Wichita State University and accurately represent the student body, faculty and staff,” Que began.

Azad quickly made an attempt to shut down the speakers, saying “the time for public forum has ended. We must ask you to take your seats.”

The speakers stayed at the podium, each ‘whereas’ growing in volume and confidence.

Other than asking the speakers to take their seats, no action was taken by the executive team or the university police in the audience to stop the meeting’s interruption.

The four students alternated between sections of the resolution, touching on alleged sexual assaults that they said Bardo swept under the rug, Innovation Campus developments they said the administration has pushed on students and an overall lack of transparency from Bardo and his administrative team.

As Fugit began speaking, Veteran Sen. Dan Corrieri loudly stated “this is ridiculous” and called for Orders of the Day, which would return the meeting to its scheduled agenda.

The speakers continued reading the resolution, causing Corrieri to stand up, shouting at the students and demanding that they be removed from the meeting. President Shepard hurriedly rushed to Corrieri, taking him out into the hallway to try to calm him.

“Seeing as this resolution is not a part of the agenda, we will unfortunately have to ask you to take your seats,” Azad said.

When the speaker ignored the request, Corrieri took the matter into his own hands.

“Take your seat right now!” Corrieri shouted before being led out of the room by Student Body President Joseph Shepard.

“You’re just going to watch this happen?” Shepard asked Provost and Senior Vice President Tony Vizzini, who was seated at the back of the room, as Shepard and Corrieri walked toward the exit.

While composing himself outside, Corrieri said he called on university police officers to remove the speakers for disrupting the meeting.

“I spoke to police officers to get them escorted out,” Corrieri said.

Fugit, one of the speakers for We The Students, said on a social media post that she and the other speakers were later asked by university police for her ID “so they can make an information report to Student Conduct to decide if (Fugit) violated any rules in tonight’s SGA meeting.” No further police action was taken, but officers remained on hand for the duration of the meeting.

Corrieri said he felt Azad had a vested interest in letting the speakers interrupt his address despite the fact that the public forum portion of the meeting was completed.

“I think Azad is probably involved with We the People just like many of the senators are,” Corrieri said.

“This leads me to believe there’s some type of conspiracy within Student Senate which is supposed to be transparent,” Corrieri said.

Azad denied any prior knowledge of the disruptive resolution, but defended his decision to let the speakers continue addressing the senate.

“We want to maintain an organized senate and make sure that everything follows protocol, but I think a lot of the students spoke about how they have been disrupted socially, academically, and personally by things that have been brushed under the rug allegedly,” Azad said. “Students have all the right that they want to come to a meeting and request to be heard.”

A number of students, including Corrieri, opposed holding a vote on the resolution on the grounds that it had not been posted in advance of the meeting and they had no time to discuss it with their constituents.

After several votes to table the resolution failed, and amendments were added to the resolution removing the call for Bardo’s resignation and making changes to the wording to make the document more accurate, the resolution “Vote Of No Confidence In Wichita State University President John Bardo” came to a vote.

A student senator then made a motion to vote on the resolution by secret ballot. The move to vote by secret ballot would have been a violation of the Kansas Open Meetings Act, which requires the public to be able to ascertain how each member of a public body voted on an issue. Student government Chief of Staff Katie Deutsch informed the senate that any action taken, such as the vote, in secret could be invalidated if challenged.

Senator Walter Wright then motioned to continue with a secret vote, which passed by an overwhelming majority. Legislative Director Emeritus Brandon James made a call to order and informed the senate of Kansas open records law requirements that the vote to be made in the open.

The vote was eventually taken as a roll-call vote, where senators vote yes or no as their names are called.

Most senators who voted in favor of or against the resolution did so without hesitation, but several senators paused to mull-over the resolution, including Sen. Paige Hungate, and eventually abstained from voting.

With a vote of 20-4-7, the 59th Session of the Student Senate passed the resolution, which stated that President Bardo “is no longer competent to lead.” The resolution also “respectfully requests that Wichita State University Faculty Senate move to initiate a similar vote of no confidence [i]n (sic) President John Bardo and Provost Anthony J. Vizzini.”

Full text of the resolution can be viewed here: Vote of No Confidence in Wichita State University President John Bardo