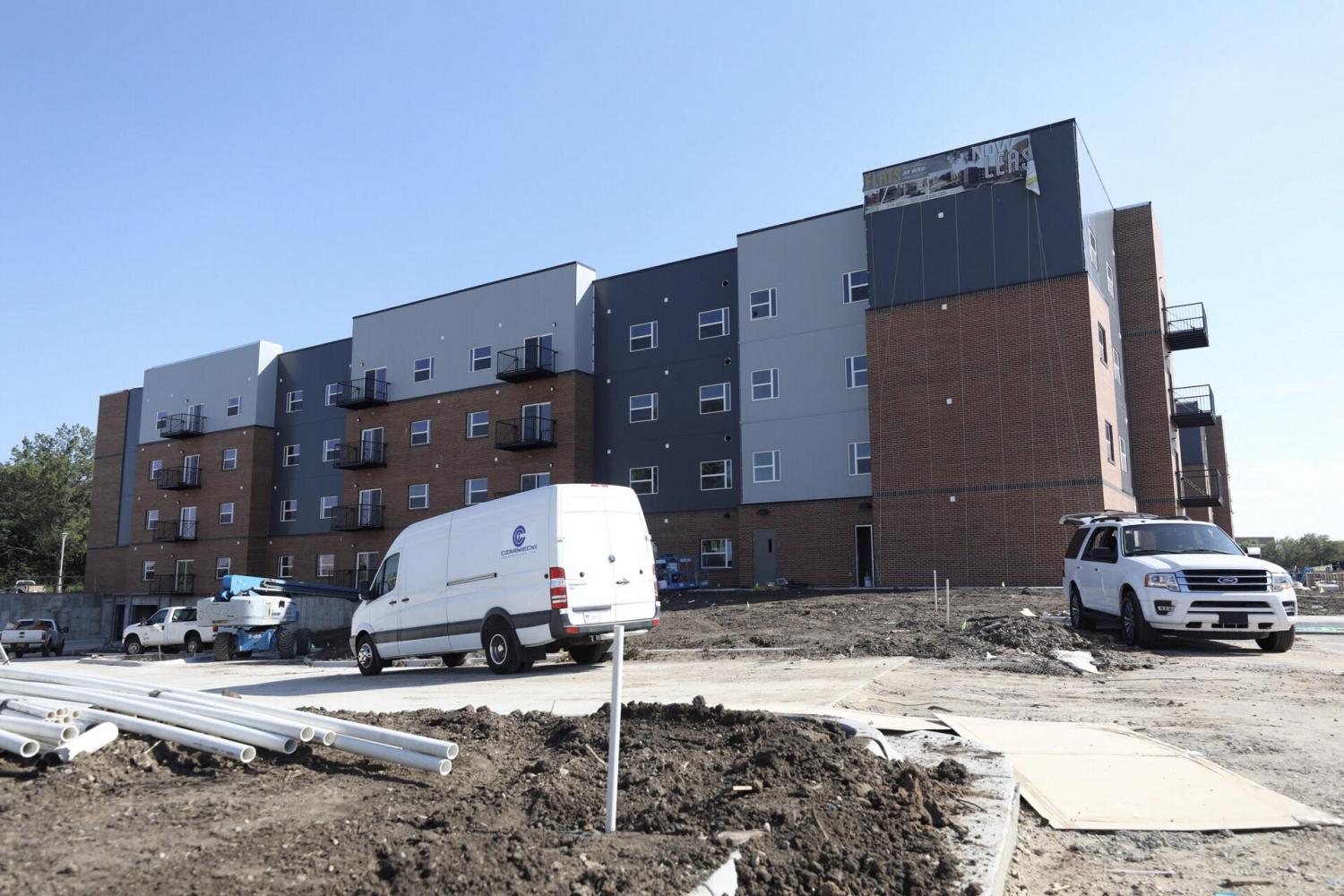 The Flats at Wichita State University is a private-owned apartment complex on Innovation Campus. Aug. 14, Wichita State announced about 300 students would be moved from Fairmount Towers to the complex.

An agreement allowing Wichita State to lease an apartment complex from a private company — owned, in part, by the chairman of the board of regents — and run it like a dorm has not been finalized.

The Kansas Board of Regents regulates private housing at Wichita State. Regents must directly authorize state universities to:

▪ Give preference to any owner or operator of private housing.

▪ Guarantee occupancy in or payments for private housing.

▪ Provide public funds for the supervision, maintenance or operation of private housing.

David Murfin, the chairman of the board of regents — which will ultimately determine whether Wichita State can lease The Flats — owns 25 percent of the private developer MWCB, LLC, which owns The Flats. Murfin’s company has also been awarded contracts by the university-affiliated nonprofit Wichita State Innovation Alliance for other major projects on Innovation Campus.

Wichita State Innovation Alliance was incorporated in 2015 to manage relationships with private industry on Innovation Campus. The university-affiliate’s nonprofit status allows it to award development contracts without competitive and open bidding, which would be required if private companies were dealing directly with the university.

According to the Kansas Department of Administration guidelines, competitive bidding processes are in place with the “expectation that State of Kansas Agencies will get the best value possible” to fulfill government agency’s “obligation to be transparent when procuring goods and services, and reasons for selecting a vendor should be clear and defensible to all.”

The Innovation Alliance board has awarded contracts to MWCB for The Flats, Airbus, and a partnership building set to begin construction this summer. Murfin’s company was also awarded the city-county law enforcement training center through an agreement between the university-affiliated nonprofit, the City of Wichita and Sedgwick County, a process the county questioned as not going through the proper competitive bidding process required of city and state law.

The nonprofit accepts proposals from anyone who is interested in building on Innovation Campus.

The Sunflower reached out to all members of the Kansas Board of Regents through its online contact form to request a response about potential conflicts of interest and Innovation Campus. Those questions went directly to the spokesperson for the board of regents, Breeze Richardson.

“Emails sent to this address are delivered to me; by Board policy, only the Board Chair is in a position to speak with the media on behalf of the Board,” Richardson said in an email. Murfin is the board chair.

Murfin did not respond to The Sunflower’s request for an interview.

July 14, the university announced it would be moving “about 300 students who had reserved space” in university-owned Fairmount Towers to The Flats on Innovation Campus, which was below 20-percent occupancy. Forty-eight students had signed up to live in the 280 available beds at The Flats.

In an online FAQ page released by the university the day of the announcement, as an answer to the question “Why wasn’t this announced sooner?” the university said, “The decision was announced as soon as the details were finalized.”

“You announce things, and then you finalize the i’s and the t’s. That actual document doesn’t exist yet,” Moses said.

In a July 7 email first reported by The Wichita Eagle, Wichita State Director of Governmental Relations Andy Schlapp told Regents President and CEO Blake Flanders that Wichita State wanted to move students from Fairmount Towers to The Flats. Under KBOR policy, Flanders can approve agreements related to private housing with terms shorter than a year.

“Flanders thanked Schlapp for expressing WSU’s intentions and cited the KBOR policy that he could approve short-term private housing agreements,” The Wichita Eagle article says. “But that e-mail provided to The Eagle was dated July 18, several days after WSU announced it was moving ahead.”

July 18 was the day after The Sunflower reported on the lease agreement with MWCB that Vice President for Student Affairs Teri Hall said would allow use of students’ federal financial aid money that would help the university pay for a lease on The Flats.

“We went to the regents under university housing, which — totally fine way to do this — and notified them that we were doing this. (We) had conversations with Blake [Flanders]. He was fine with it,” Schlapp said.

“When he got it, talked to their attorney, they felt it would be better if we went under the private housing model, which is fine. So there’s a couple more steps and approvals that have to go through that. All that is fine,” Schlapp said.

Schlapp told The Wichita Eagle that Wichita State would visit with the regents in September to refine a future agreement on The Flats. Move-in day for Wichita State students is Sat., Aug. 19.

The Flats is a privately owned apartment complex constructed this year on Innovation Campus and set to open in the fall. The building is owned by MWCB, a partnership of four of the region’s most prominent businessmen: Murfin, Nestor Weigand Jr., Ivan Crossland Jr. and Steven Barrett.

The Flats offers students a more modern housing option with a central location on campus. (Fairmount Towers is a 53-year-old building on the opposite corner of the intersection of 21st Street and Hillside.) Students who are being moved to The Flats will pay Fairmount Towers rates to live at the new complex.

“But more importantly to the vision and mission of this university is how do we get students on our campus? How are we creating those collision spaces with businessmen?” Schlapp said.

“We have 400 Airbus employees, we’re building Partnership 2 — that’s going to be full of more business people. We have two other pretty large companies that we think are pretty close. The only piece that’s missing is students,” Schlapp said.

The Flats was originally supposed to be operated by the developers MWCB, but as early as Feb. 23, university officials announced Wichita State would be managing the apartment complex. The university would not provide The Sunflower with any details of that agreement. Later in the spring, it was announced payments to The Flats could be made through the online, university portal.

In response to a record request for a copy of a written agreement between The Flats and Wichita State authorizing the use of the university portal to make payments to The Flats, Wichita State General Counsel David Moses said “such written records does not exist.”

Schlapp said part of the reason The Flats had so few people sign up was university housing and residence had made The Flats a third priority — behind university-owned Shocker Hall and Fairmount Towers — for students who wanted to live on campus.

Schlapp said university housing and residence “did not manage probably to the level that the developer expected.”

“That was the question they were asking: ‘How come we only have 48 (students)? What are you doing? Where are the tours? We’re not seeing the students, blah, blah, blah. We can’t see on your webpage where you’re advertising, we can’t. …’ They were ready to go to a second developer — or a second person — to fill the building. But that defeats the purpose of why they built it,” Schlapp said. 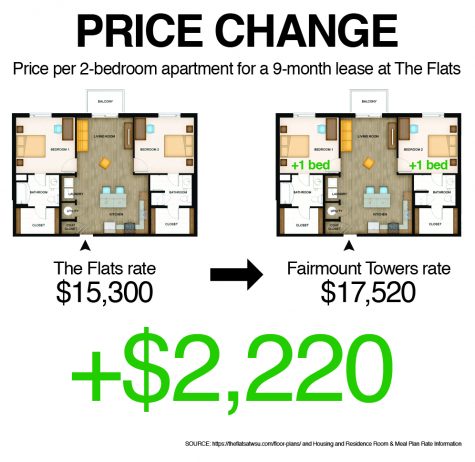 One of the reasons MWCB built The Flats, Schlapp said, was because they care about Wichita and Wichita State and wanted students to live there.

“They care about improving Wichita,” Schlapp said of MWCB, whose owners are all local. “They thought building a private apartment would be good. They have a choice. They had a choice to hire Case & Associates, who rents most of the apartment complexes around here, and that would have been full.”

“But they didn’t want it full. They wanted WSU students. So they asked us to manage it.”

Schlapp said university housing had the idea to run The Flats like a dorm. But to do so, Schlapp said, would take developers “willing to take a loss to solve this problem.”

Schlapp said the Wichita State will pay MWCB about $7.50 a square foot as part of the lease agreement, which he said is less than half of what the developers needed to “break even.”

“They’re going to lose their ass in this deal. But they think it’s the right thing,” Schlapp said of MWCB.

(*Correction: An earlier version of this story that appeared online erroneously listed the Experiential Engineering Building and GoCreate as being developed by MWCB and that WSIA awarded the contract for the Law Enforcement Training Facility on Innovation Campus. The nonprofit did not award that contract but subleased the land to Murfin’s company to build on Innovation Campus.)